LINCOLN, Neb. (DTN) -- TC Energy Corp.'s termination of the Keystone XL pipeline project ended what would have been an economic boost for many states, many of which filed a legal challenge to President Joe Biden's executive order that revoked the project's federal permit.

"Without Keystone XL, the United States will not only be more dependent on overseas sources of oil, but our state will not enjoy the benefit of the jobs and property-tax revenue the project would have brought," he said.

Multiple reviews by the U.S. Department of State spanning two administrations found the pipeline would pose little or no environmental harm, including no negative effects on climate.

The states said in their lawsuit that counties, local communities and school districts stood to gain tens of millions of dollars in tax revenue through the construction and operation of the pipeline.

For example, the total estimated property tax from the project in the first full year of operations was estimated at about $55.6 million across 27 counties in Montana, South Dakota and Nebraska.

"Through the process we developed meaningful indigenous equity opportunities and a first-of-its-kind, industry-leading plan to operate the pipeline with net-zero emissions throughout its lifecycle," he said.

"We will continue to identify opportunities to apply this level of ingenuity across our business going forward, including our current evaluation of the potential to power existing U.S. assets with renewable energy."

The state of Nebraska has been at the epicenter of the Keystone debate.

Some farmers and ranchers have opposed the pipeline for fear a pipeline accident could harm sensitive lands and the Ogallala Aquifer in the Sandhills in Nebraska.

Art Tanderup, landowner and farmer on the Keystone XL pipeline route near Neligh, Nebraska, said in a statement, "After a decade, it is a good day that TransCanada has realized that there is no future in tar sands and the Keystone XL pipeline, but it is imperative that all permits granted in Nebraska be revoked, especially the Nebraska Public Service Commission's permit."

"On his first day in office President Biden canceled the Keystone XL pipeline," they said in a joint statement.

"He put thousands of workers out on the street without a job in the middle of a pandemic. As the head of the AFL-CIO put it, quote: 'I wish he hadn't done that on the first day, because it did and will cost us jobs.' Now Keystone XL is officially dead and President Biden's radical decision is proving to be disastrous for American workers and their families."

After Biden signed the executive order, Oklahoma Attorney General Mike Hunter asked him to reverse the decision saying an estimated 10,000 union jobs would be lost, as well as $500 million allocated for indigenous suppliers and a $10 million fund for green-jobs training.

"It is my hope, and the hope of a great many elected officials and countless hard-working Americans, that you will reverse your position and allow construction of the Keystone XL pipeline to continue," Hunter said in a letter to Biden.

TC Energy faced a number of legal challenges and changes in federal policy on the project, since it originally proposed the $8 billion pipeline in 2008.

In 2018, President Donald Trump's administration issued a presidential permit to build the pipeline as part of a release of a federal review, concluding the pipeline poses no significant threat to the environment.

The 1,700-mile pipeline would have carried about 830,000 barrels of oil per day from Alberta oil fields to Texas refineries.

In November 2018, a federal judge overturned the Trump administration permit and ordered a full environmental review of the project. 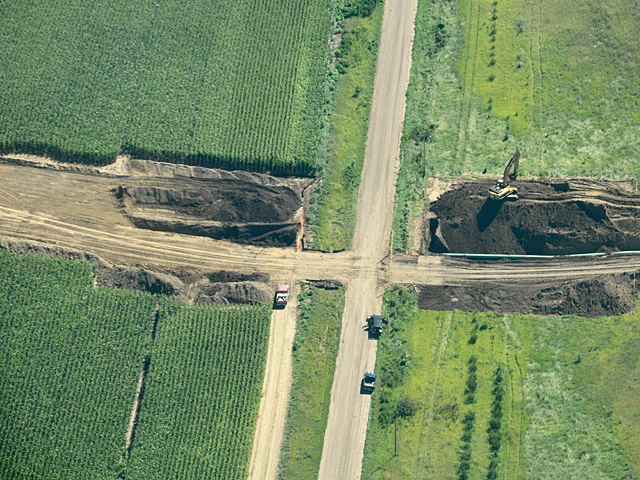