By May 25, the index had fallen to $6.37, $1.11 below its May 7 peak, as a combination of nervous noncommercials and various rain forecasts triggered more than two weeks of selling across the entire grain sector. The drop in corn didn't matched the animated plunge down the elevator shaft that I described on May 14 in "A Sense of Grains' Impending Doom"

(https://www.dtnpf.com/…), but it did break the momentum of corn's impressive uptrend, and there is a good chance the May 7 high will stand as the high watermark for prices in 2021.

I say that because the convergence of bullish factors in early April was so unique, it is unlikely this Humpty Dumpty of a rally will be put back together again. Among the bullish contributors, we saw an excessively wet situation in Brazil turn on a dime and go from corn being planted late to not having necessary moisture at pollination time. Southern Brazil started getting rain last weekend and continues to have chances for more, but the forecast for central Brazil remains mostly dry and crop estimates have plummeted.

During the winter, China secured more large purchases of old-crop corn as USDA announced 231 million bushels (mb) of sales at the end of January and another 220 mb in late February and early March. As China's February purchases were made public, DTN's national corn basis started to strengthen.

Here in the U.S., DTN's National Corn Index hit a new seven-year high of $5.54 on March 31 and started a steady climb to the $7.48 peak on May 7. Not only did basis strengthen as cash prices increased, the May premium over the July corn contract shot up dramatically from an already bullish 16 3/4 cents on March 31 to a high of 66 3/4 cents on April 30. The May premium even surpassed the previous 2013 peak of 62 1/2 cents for the same spread. The urgency of buying from the commercial sector that was trying to secure either cash corn or corn by way of the expiring May contract was a rarity for corn prices.

Corn planting got off to a good start in 2021, reaching two-thirds completed by May 9. Dry fields, especially in the northern and Western Corn Belt were helpful for quick planting but were also threatening to new crops needing moisture. Other parts of the Corn Belt received shots of rain in April and May, but the northern and western regions were mostly ignored until Monday's (May 24) new seven-day forecast gave hope of broader coverage.

Ironically, July corn locked down its 40-cent limit on May 13, followed by a 31-cent decline the next day -- the same time China started buying 423 mb of U.S. new-crop corn over six consecutive sessions. Some tried to blame corn's limit-down drop on the Memphis bridge closure, but Mississippi River traffic flowed the next day. CFTC data showed noncommercials bailed out of 41,378 net longs for the week ending May 18, and quite possibly for no good reason. USDA later reported 88.2 mb of corn was shipped the same week the bridge closed temporarily.

I will be eager to see the next Commitments of Traders report on Friday afternoon (May 28) for the week ending May 25, the same day DTN's National Corn Index hit a one-month low of $6.37. I suspect net long positions fell below 400,000 for the first time since October 2020 as noncommercials started to give up on corn.

More interesting, I find little evidence commercials or end users have given up on corn. As of Wednesday evening (May 26), DTN's national basis settled 16 cents above the price of July corn -- the same basis corn showed at its May 7 peak.

The May/July corn spread is no longer trading, but July corn is now showing a 79-cent premium above the September contract, which is the largest July premium to September that the corn market has seen for this time of year since 2012-13 -- a season that ended with a 7.4% ending stocks-to-use ratio. In layman's terms, the market is so intent on securing corn supplies by July that it is willing to pay 79 cents per bushel more, rather than to wait a few months for harvest and take cheaper corn in September. Now that's bullish!

We could make it even simpler and say that cash corn prices -- still trading at their highest levels since 2013 -- are bullish by themselves, something that noncommercials aren't likely to understand. It's difficult to argue that there's no demand for corn when Thursday afternoon's DTN Market Tracker showed a $7.04 bid in Aberdeen, South Dakota. And Aberdeen is a long way from the Mississippi River.

Thursday's (May 27) limit-up close in July corn was surprising in how quickly corn prices turned around, but given the bullish demand clues, it was not surprising to see prices find support near the 50-day average of $6.13. As we head toward a three-day weekend with low temperatures threatening young row crops in northern states, Friday's trade could be volatile.

But heck, with corn supplies tight, end users actively buying, China keeping its cards close to its vest and weather forecasts changing every week, the whole summer is apt to be volatile. As I see it, all this anxiety is going to give us a trading range much higher than what we've seen during the past seven years. Prices should eventually calm down, but not until we know a lot more about the new season than we do now. 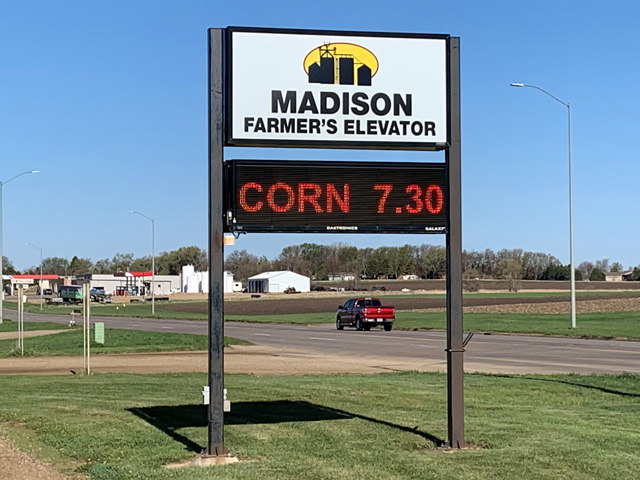