OMAHA (DTN) -- The board of directors for Kansas City Southern railroad on Thursday switched tracks and chose to accept the purchase offer from Canadian National Railway, concluding that company's bid is superior to that of Canadian Pacific Railway.

"We've said from the beginning that Kansas City's going to be an important part of this combination, and not just from a rail perspective but from a community perspective," Rob Reilly, CN's chief operating officer, told the Star. "We've got a long history of working with the communities that we operate through."

Canadian Pacific now has five days to offer a counter proposal, and the KCS board would then determine if a new CP offer would outbid Canadian National's latest offer.

The two Canadian railroads have been locked in a bidding war for KCS and public relations and regulatory campaigns against each other as they battle over KCS's line down through the Midwest, Plains and into Texas and Mexico. That single-line linkage for a railroad across Canada, through the central U.S. and into Mexico has been the selling point in the merger plans for both CP and CN -- creating a single North American railroad.

The lynchpin for either Canadian railroad will be winning final regulatory approval from the STB. With that, CN and CP each have been aggressively filing letters of support with the regulatory board. CP has reported more than 540 letters from shipping companies, communities and politicians for its bid. Canadian National this week filed more than 1,000 letters of support with the STB for either its merger or approving the proposed voting trust.

Responding late Thursday, CP released a statement noting it was not surprising CN raised its offer "and it only highlights CN's recognition of the significant regulatory risk/challenges associated with its anti-competitive bid." Canadian Pacific maintains its offer is the only one in the best interests of North American shippers because CP does not have any lines that run parallel or compete directly with KCS. Canadian Pacific noted it would also respond to KCS "within the allotted time."

Canadian National has several letters from politicians such as Mississippi state lawmakers, mayors of towns in both the U.S. and Canada, as well as an array of shipping businesses along CN lines. Nearly every letter repeats a similar, verbatim line that a CN-KCS railway would provide "superior benefits" by "offering faster, safer, cleaner and more direct service for North-South trade."

Sugar Services LLC, which has locations stretching from Minnesota and Michigan to Louisiana and Florida, stated, as several other companies did, "a combination of CN and KCS would help us win in our markets," another statement repeated near verbatim in the letters.

Emerson Milling Inc., a Manitoba food and petfood company, wrote in its letter that a combined CN-KCS line would make its products more competitive shipping to the Midwest and Texas. Emerson Milling ships through both CN and KCS already.

Nathan Sabourin, owner of Nuvision Commodities, a Manitoba grain company that ships across Canada, the U.S. and Mexico, has been working with CN since 2014. Sabourin said markets in the south-central U.S. and Mexico "have eluded us due to the lack of competitive advantage to tap into those areas" despite sustained demand for the products Nuvision provides.

Rudy Agro, a pulse crop company in Saskatchewan, Canada, ships into both the U.S. and Mexico. The company notes a shortage of reliable equipment in Saskatchewan that leads to higher costs for the company to find alternative shipping. Rudy Agro uses a combination of hopper, box cars and intermodal loads for both domestic and international shipping. A single line from the CN to KCS would provide more seamless transportation services, the company stated.

Even before CN sought to sweeten the pot, at least some letters from supporters of the CP-KCS merger noted that CN's higher cash bid for KCS implied a significant acquisition premium that would create incentives for CN to raise rates even in those instances where it is not harming competition.

Blaine Higgs, the premier of New Brunswick, wrote the STB supporting the CP deal and opposing CN. Higgs called on the STB to reject CN's request for a voting trust structure and reject any waiver from full review for CN's proposal. Higgs noted CP's proposed acquisition did not raise the same competition concerns "and would in fact enhance competition and further level the playing field for rail shippers in North America."

Letters from shippers backing CP also had wording in many cases that was nearly verbatim. A repeated line in many of the letters was, "From our perspective, the transaction promises to provide improved service options and invigorate transportation competition in the markets we serve."

Griffith stated, "corn, soybeans and dark northern spring wheat from North Dakota and Minnesota" would move into the Southern U.S. and Mexico. The merger would also improve transit time by one to three days for a 100-car train filled with grain from North Dakota heading to Mexico, the largest market for U.S. corn and corn byproducts.

Bob Knief, president of Bartlett and Co., said the company has significant operations with KCS in both the U.S. and Mexico. "In short, we believe CPKC will improve our service which will, in turn, allow us to better serve our customers and grow our business," Knief wrote.

Ben Buie, grain team leader for MaxYield Cooperative in West Bend, Iowa, said the cooperative has three facilities served by CP railroad in northern Iowa. But the company rarely ships grain on CP "because the market wants the grain to flow south, and that option is not available to us as a single-line option on the CP today." MaxYield typically ships corn and beans to Mexico from the Union Pacific line. The CP/KCS merger would give the cooperative another single-line option to get into Mexico and other southern destinations. "This transaction will improve our transportation options," Buie wrote.

Doug Punke, CEO of Renewable Products Marketing Group (RPMG) out of Minnesota, noted the company's ethanol plants in Iowa, Minnesota and North Dakota ship ethanol to export locations in the Gulf of Mexico, as well as distillers grain to Mexico. From RPMG's perspective, CP would increase competitive options, not reduce them.

Dennis Inman, vice president of grain for Central Farm Service in Truman, Minnesota, also operates four grain elevators and several agronomy facilities with access to CP. Most of their grain locations ship corn and soybeans to the Pacific Northwest and New Orleans, Louisiana, export elevators, as well as processing plants in Northern states and Canada. Inman wrote the company sees a lot of benefits to a combined CP/KCS network that would provide a "new single-line hauls and access to ports on the U.S. Gulf, Atlantic and Pacific coasts as well as to key overseas markets" that would help Central Farmer Service reach current markets and expand into new ones more efficiently.

"Central Farm Service has not often spoken favorably about railroad consolidation, but we see this transaction as uniquely beneficial, with limited downsides that might result from another round of Class I consolidation." 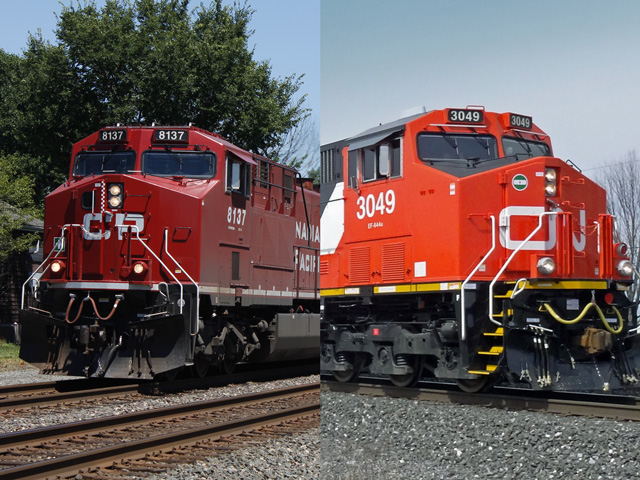