ANKENY, Iowa (DTN) -- The winter wheat crop mostly escaped disaster from a late-April freeze in the Central and Southern Great Plains, though reports of isolated damage have surfaced.

Record- or near-record-low temperatures were recorded in major winter wheat-growing states such as Kansas, Oklahoma and the Texas Panhandle from April 20-23, according to DTN Senior Ag Meteorologist Bryce Anderson. At the time, most plants in the region were in various growth stages -- joint, boot or heading -- and vulnerable to freeze damage and yield loss.

Dave Green, executive vice president of the Wheat Quality Council based in Lenexa, Kansas, said the crop mostly dodged a bullet. However, he said some fields that were heading out in low-lying areas of central and southwest Oklahoma sustained heavy losses.

"There wasn't widespread damage that affected entire counties," Green said. "I think farmers in Kansas feel pretty good, and there was no damage in Nebraska or Colorado. There were isolated issues in Oklahoma.

"As always, (a freeze) is devastating to individuals that get hit," he continued. "Farmers are more worried about the lack of rain. It's been extremely dry in many areas."

Read about concerns leading up the freeze here: www.dtnpf.com/agriculture/web/ag/crops/article/2021/04/21/spring-freeze-threatens-winter-wheat.

Anderson said freezing temperatures extended as far south as northern Texas and in the mid-South last month. In northwestern Kansas, record lows of 18 and 19 degrees Fahrenheit were recorded on April 20-21 at Goodland, Kansas. Oklahoma City and Abilene, Texas, also experienced all-times lows on April 21 of 29 and 32 degrees Fahrenheit, respectively.

The coldest readings in Kansas -- which has the most winter wheat acres at 7.3 million, according to USDA data -- occurred in areas where the wheat crop was not far enough along to be vulnerable to freeze injury, according to Anderson. Some parts of the state didn't get as cold as expected.

"Areas in Kansas with wheat in the jointing stage largely avoided the coldest conditions," Anderson said. "Central and north Oklahoma had wheat further along at that time with about one-third of the crop in the heading stage. These areas had minimum temperatures of 27 to 29 degrees, which would be cold enough to cause damage to heading wheat."

It typically takes 10 days to two weeks after a freeze occurs to see if vulnerable winter wheat sustained damage. Mount Hope, Kansas, farmer Kent Winter told DTN late last week that his 750 acres of hard red winter wheat that was in the joint stage during the cold snap was unharmed.

Romulo Lollato, a Kansas State agronomist, said via Twitter on May 5 that the flag leaf on some wheat plants in some Kansas fields was coming out yellow, indicating a dead tiller. He tweeted: "... Some consequences of the freezing temperatures from two weeks ago starting to show in some @KansasWheat fields. Low incidence so far but some tillers were lost."

Mike Schulte, CEO of the Oklahoma Wheat Commission, estimates 3% to 5% of the state's winter wheat crop sustained freeze damage. Yield losses in affected fields will likely range from 2%-3% to isolated instances at 90% to 95% or a complete loss, he told DTN. Oklahoma farmers planted 4.3 million acres of winter wheat, according to USDA statistics.

"Every freeze event is different ... you never know what you will get," Schulte said, noting it could have been worse. With harvest only three weeks away near the Texas border, he described the Oklahoma crop as "slightly above average."

Fifty-four percent of the Oklahoma winter wheat crop is rated in good-to-excellent condition, according to the May 2 USDA Crop Progress and Condition report. That's 7% lower than the week before.

Oklahoma is projected to produce 110.7 million bushels of winter wheat this year, averaging 37.1 bushels per acre, according to a report given at the Oklahoma Grain and Feed Association annual meeting held earlier this week.

Kansas winter wheat is rated at 55% good-to-excellent condition as of May 2, according to USDA. The rating was unchanged from the previous week. Texas winter wheat conditions improved from 18% to 24% good to excellent from April 25 to May 2.

Scouts participating in the Wheat Quality Council's 2021 Hard Red Wheat Tour May 17-20 will have an opportunity to further assess the condition of this year's crop. DTN will be posting daily updates from the tour. 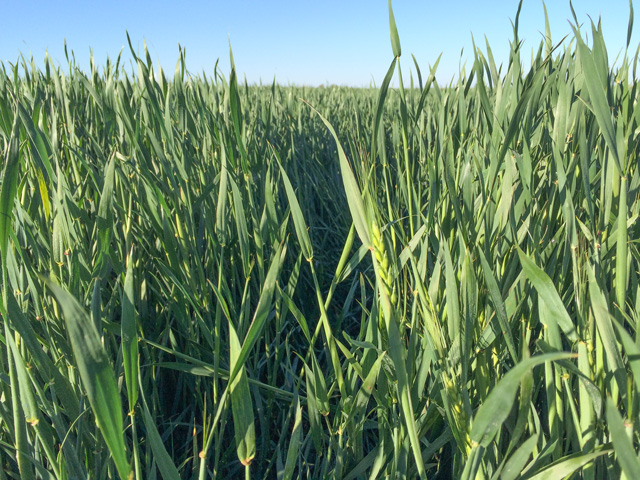