LINCOLN, Neb. (DTN) -- All sides in a legal challenge to California's Proposition 12 laid out their cases during oral arguments in a federal court on Wednesday.

An attorney for two national agriculture groups told a three-judge panel of the U.S. Court of Appeals for the Ninth Circuit in Pasadena, California, that when the law takes effect next January, it will distort the hog market as a result of added costs to producers to comply, https://www.dtnpf.com/….

"Nearly all of the pork consumed in California is produced outside the state; 99.8% of the pork sold in California comes from elsewhere," Timothy Bishop, attorney for the National Pork Producers Council and the American Farm Bureau Federation, told the court.

"So, a farmer can only raise a sow that gives birth to a market pig. But the cut of meat from the market hog is what is sold, not a whole hog. So, the result of that is that Proposition 12's costs of housing a sow are translated into costs. But cuts of meat that are not sold into California or were raised in California have nothing to do with California and that's going to distort prices throughout the national market."

Judge Milan Dale Smith Jr., the senior judge on the panel, questioned whether ag groups have a legal argument because of rulings made by the Ninth Circuit in other Commerce Clause cases, suggesting states like California have the right to regulate commerce within their borders.

"It seems to me that much of your argument is focused on some regulations that have not yet been promulgated officially," Smith Jr. said.

"The reality is you're suggesting that the pork industry needs uniformity because of what you just described. So, you don't have uniformity even now, even before Prop 12."

The California law requires 24-square-foot pens for hogs, among other requirements. Bishop pointed to an Ohio law that provides flexibility to hog producers across the country.

"Virtually everyone in the industry, for both efficiency and sow welfare, use individual stalls for at least the period after weaning when sales are weak and they need protection," Bishop said, things that Prop 12 prohibits.

He added: "Your honor, there is no other state that requires this sort of square footage. In fact, states do not require square footage. The Ohio law is important because it allows you to allow something that virtually every farmer in the United States does, which is to use individual stalls post-weaning until pregnancy is confirmed. California law specifically prohibits that."

Matthew R. Wise, deputy attorney general for the state of California, told the court Proposition 12 applies to pork sales only in California.

"This court has repeatedly affirmed the fundamental principle of federalism at stake here, that each state is permitted to regulate commerce within its borders," Wise said.

The state needs about 700,000 sows to satisfy its pork demand. About 1,500 out of California's 8,000 sows are used in commercial breeding housed in small farms. The NPPC has argued that because the state must import most of its sows, Proposition 12 essentially regulates farmers beyond state borders.

NPPC Assistant Vice President and General Counsel Michael Formica said in a statement to DTN that Proposition 12 will have "wide-reaching implications" for the industry by "imposing arbitrary animal housing standards that reach far outside the state's borders to farms" across the country.

"It's a clear regulatory overreach and a violation of the Commerce Clause of the U.S. Constitution," Formica said.

The Humane Society of the United States and other animal welfare groups have intervened in the case.

Bruce A. Wagman, the attorney representing animal welfare groups, told the judges the law sets a floor for compliance for hog producers and not a limit.

"It's not a requirement; you can go more than 24 feet, you can use something different, you just can't use the inhumane treatment that California has found is inhumane," he said during oral arguments.

"We don't want to see the products of animal cruelty on shelves, but there is a health and safety issue. We're just coming out of a pandemic, both of which suggests that treating animals in certain ways leads to health and safety issues and public problems. And so, there's no question about the wisdom of Proposition 12 in trying to limit the products of that kind of cruelty, coming into California." 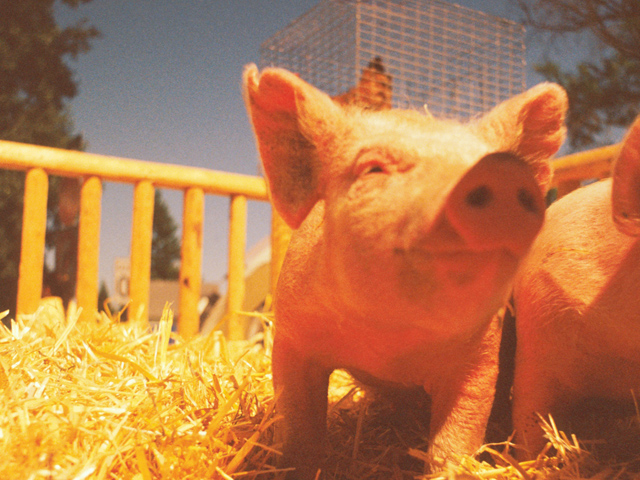