NASS releases a similar report about price reactions after USDA livestock reports, but let's just focus on one thing at a time. Does it look like grain prices are predictably swayed by government numbers?

USDA collects evidence about this question to show that they're not exerting undue influence on prices with their statistics releases. Ultimately answerable to the American people, presumably the department doesn't want to undertake actions that are exploitable by traders at the expense of agricultural producers or grocery shoppers. If the report shows no historical evidence of predictable price movement, then we can reassure ourselves the markets aren't being set up for some kind of manipulation next Wednesday, March 31, when we'll get a big dump of grain market-related statistics: Agricultural Prices, quarterly Grain Stocks and the results of the annual Prospective Plantings survey.

Anyway, the takeaway is there is no real pattern in the price reactions. These USDA reports are not consistently driving grain prices up or down. Following each quarterly Grain Stocks report since 1985, the market has displayed 69 daily price increases, compared to 71 daily price losses and eight "no change" days. Similarly, impartial distributions of up-and-down reactions have been noted for soybeans, wheat and cotton after both Grain Stocks reports and Crop Production reports, looking at day-after and week-after price reactions. If anything, the count across all crops, all reports and all timeframes may show a tiny bias toward downward price reactions (1,141 increases, 74 no changes, and 1,155 decreases), but not to a statistically significant degree.

Cleverly, USDA's report about reports doesn't just measure futures price movement. No, the "corn price" they use is "the closing cash price for Southern Iowa #2 yellow corn," which means their study is able to detect report influences on basis movement (in a sample of one region's bids), as well as the underlying futures price movement. Consider the March 31, 2011, movement, when after bullish reports the nearby May futures contract ended the day locked limit up, 30 cents higher, at $6.93 1/4. USDA's data shows the cash corn price rose 45 cents that day -- or 15 cents of basis strengthening alone. Just a reminder for next week: the daily price limit is $0.25 per bushel for CME corn futures these days and $0.70 per bushel for soybeans.

If the March 31 trading date has a history of relatively bigger moves than other months, that's hardly surprising because March 31 is not only the date of the quarterly Grain Stocks report release, but also the release of the annual Prospective Plantings survey results. Both are servings of fresh information to a market that has no other official way to obtain nationwide grain inventory levels or comprehensive farmer planting intentions. The two reports address two separate crop years: the inventory of how much of last year's grain is still sitting in bins and the potential number of acres that might grow various types of grain once planted this spring. But the bullishness or bearishness of each report can definitely influence the trading patterns of both nearby and deferred futures contracts. Unfortunately, it's impossible to isolate the effects of either report separate from each other. We can't "control" the experiment and see if the market would jump 5 cents for the Prospective Plantings report but drop 15 cents once the influence of the Grain Stocks report was also factored in. There's just no way to know, because both will be released at the same moment: 11 a.m. CDT on Wednesday, March 31, 2021.

There was one reliable pattern I could see in the data. We may not be able to predict from history whether grain prices are more likely to go up or down on Wednesday, March 31, but history does suggest if corn prices close up that day, by the Wednesday of the following week they will likely still be higher than their Tuesday, March 30, price tag. It's been very rare in the past 10 years that the market doesn't remain either "up" or "down" for a week after a quarterly Grain Stocks report, especially if the report's one-day reaction was a double-digit jump. In fact, after March reports specifically, this has been true every year for the past 10 years -- but let me emphasize this is just an interesting little bit of trivia, not a trading recommendation.

And perhaps it's not a good idea to get too eager about the idea of big March 31 market movements. In the cash corn market, the price change on March 31, 2020, was exactly 0 cents. 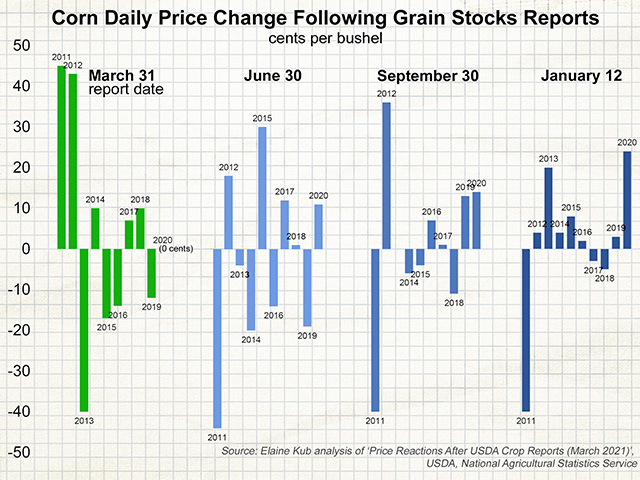