OMAHA (DTN) -- Agricultural trade barriers were frequent areas of discussion with senators asking Katherine Tia on Thursday how the Biden administration would expand trade markets if Tai is confirmed as U.S. trade ambassador.

Agriculture Secretary Tom Vilsack, in his first day on the job, also told reporters the current high sales to China have benefited farmers, but it's still important for agriculture to diversify markets.

Members of the Senate Finance Committee holding Tai's confirmation hearing to lead the U.S. Trade Representative's Office raised concerns that President Joe Biden might dial back on signing any new trade agreements until his domestic priorities are achieved.

"Ms. Tai, you must make the president understand that trade is a domestic priority for hundreds of millions of Americans," said Sen. Mike Crapo, R-Idaho, ranking member of the Senate Finance Committee.

Tai's hearing comes as trade deals and negotiations reached under the Trump administration have set the table for record agricultural exports in fiscal year 2021, which USDA forecasts at $157 billion. The higher trade sales are driven heavily by a boost in sales to China, projected at $31.5 billion in sales for fiscal year 2021.

In her opening statement, Tai noted she is the daughter of immigrants who were born in mainland China and grew up in Taiwan. Her parents both then immigrated to the U.S. Tai said that becoming the country's trade representative would provide special resonance for her.

"I am proud to live in a country where -- in just one generation -- their daughter could grow up to represent the United States and our interests around the world," she said.

When it comes to China, Tai said the U.S. has to commit to work with other trade partners, while working with China as well.

Tai called China "simultaneously a rival, a trade partner, and an outsized player whose cooperation we'll also need to address certain global challenges." She added, "We must remember how to walk, chew gum and play chess at the same time."

Tai then indicated the Biden administration would prioritize resilience in the U.S. and make investments in domestic infrastructure "to harness our potential, boost our competitiveness, and build more inclusive prosperity."

Tai was also asked about the billions in tariffs placed on other countries, especially China, by the Trump administration. Tai did not dismiss the value of using tariffs to address trade challenges. "Tariffs are a legitimate tool in the trade toolbox," Tai said.

Crapo pointed early on to some agricultural challenges coming up with Mexico despite the new United States-Mexico-Canada Agreement (USMCA). The Idaho senator pointed out Mexico is putting new restrictions "that lack any scientific justification" on potato sales, as well as biotechnology.

Tai said she is aware of some of the ongoing concerns with Mexico and agriculture. She said new enforcement tools in USMCA could help.

"We have a full set of tools, a lot of them new in USMCA, to engage with Mexico and Canada for that matter, to address ongoing irritants and ongoing frictions again," Tai said.

Sen. Charles Grassley, R-Iowa, pointed to concerns that Canada is undermining USMCA's dairy provisions by setting aside a percentage of quota for domestic processors that limits U.S. dairy access. Grassley wanted Tai to assure she would pursue enforcement against Canada that was begun by former USTR Robert Lighthizer. Tai said she also was aware of the dairy situation and noted this is a long-term challenge.

"U.S.-Canada dairy tensions also feel like some of those issues dated back to the beginning of time," Tai said. She added, "If confirmed, I look forward to digging into this file."

Crapo and Grassley also each pointed to Lighthizer's early talks with the United Kingdom to negotiate a trade agreement that remains under discussion. Crapo said the U.K. represents the fifth-largest economy in the world. "The U.K. must now be complemented with a special economic relationship that will increase employment and output on both sides of the Atlantic," Crapo said.

Tai cited the "pandemic reality for the last year, and we're still in the midst of it, working to get out of it." After confirmation, Tai said she would review the discussions and negotiations that had taken place so far.

Grassley also asked about Brazil and ethanol. Brazil has a 20% tariff on U.S. ethanol, but U.S. allows Brazilian ethanol into the U.S. without any tariff.

Tai acknowledged Grassley is a "leading voice" on ethanol trade, but Tai said she lacked the preparation and background to engage on the issue during the hearing.

While pointing to China trade promises, Grassley noted the $31 billion in farm exports to China, while falling short of what was expected, is still positive news. Still, there are structural changes needed in China's economy Grassley said. Tai acknowledged the long-term challenges of making structural changes are "well-worn" roads among former USTR, expecting China to change," Tai said.

"On the issue of the U.S.-China trade, relationship, we need to be exploring all of our options," Tai said.

On a separate press call Thursday, Vilsack also was asked about the Phase One Economic and Trade Agreement and China's pledge to buy nearly $37 billion in agricultural goods in the first year. The pandemic affected sales and the agreement has a provision allowing market conditions to dictate whether purchase goals would be reached, he said. Still, China's buys have buoyed the farm economy.

"That's one of the reasons why -- if you look at commodity prices today versus where they were a year ago -- you're going to see across-the-board increases, which obviously is good news. For many farmers, ranchers and producers, it's the best news they've had in some time," Vilsack said.

So, China seems to be living up to its obligations, Vilsack said, but there is a lot of risk that a geopolitical event could wreck those export sales.

"At any point in time, because of the complex nature of the Chinese-U.S. relationship, things can happen that might impact and affect those purchases, as we saw with the assessment of tariffs in the previous administration," Vilsack said.

While highlighting the importance of the trade relationship with China, Vilsack also added that the U.S. will "do everything we can to continue to look for other market opportunities for American agriculture."

Vilsack pointed to economic growth across Asia -- reiterating a theme brought up when the Obama administration pushed for the Trans-Pacific Partnership, which was rebranded after the U.S. chose not to enter the agreement under former President Donald Trump. Vilsack said opportunities remain to increase sales to the United Kingdom in a trade deal, and possibly the European Union as well. "It's important for agriculture to have multiple market opportunities." 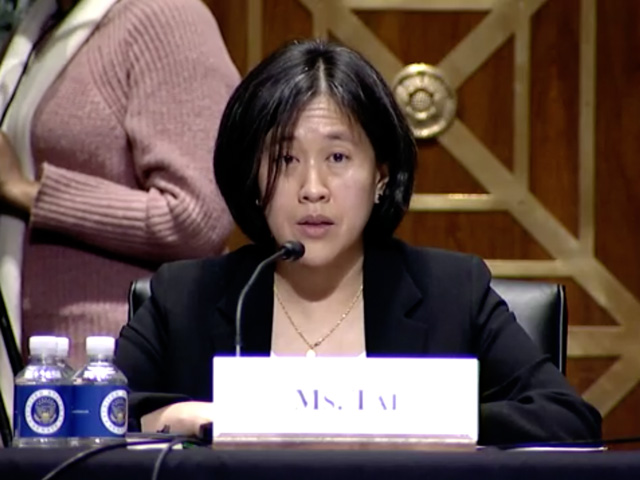