The accuracy of monthly NASS reports is a constant source of discussion and speculation among farmers -- more often when prices are lower than higher -- and at times can lead to anger among producers who perceive the agency as overestimating production. In at least one instance in 2019, NASS staff were threatened while on a Midwest crop tour, causing NASS to pull its staff off the tour.

AFBF put together a farmer-led working group that spent more than four months looking at NASS' processes and methodologies -- including holding some workshops -- to develop recommendations for the agency's data collection and release of monthly reports.

"While NASS may have a gold-standard reputation for agriculture statistics globally, U.S. farmers' confidence in their reports has unfortunately declined," said Zippy Duvall, president of AFBF.

Significant changes in recent years in planted acreage, crop yields and inventory levels have led to dramatic swings in the markets, Duvall said, "And left farmers questioning the agency's ability to respond quickly to rapidly changing conditions on the ground."

Duvall said AFBF members hope the recommendations will provide a framework for NASS to "make timelier adjustments to these key reports and restore trust in the data we've relied on for so long."

Duvall added, "NASS has been responsive to feedback in the past, and we are committed to working with the agency to achieve these new goals."

Top among the recommendations is that NASS should increase transparency with the agricultural community. NASS needs to better explain how the agency arrives at its numbers reported and "provide clarity on the relationship between aggregate, state, county and field-level reported numbers." Specifically, NASS should note when numbers the agency is providing "are not the most current due to a market event that occurred after that date collection period." A case in point here would be last summer's derecho in Iowa, which hit just two days before the August Crop Production report and did not take into account the damage from that storm.

NASS will typically issue a statement noting a resurvey of acreage after a standard monthly report is released.

AFBF stated that NASS should consider being flexible on the date of report releases when natural disasters occur.

Farm Bureau also wants NASS to use better technology. Pointing to faster computers, algorithms, data and proprietary models that are being used, AFBF wants the agency to expand its resources, information, data and software, as well as staff and networks "so that it can accelerate the development of innovative and more timely survey instruments and analysis for the benefit of the agricultural community."

While better technology and staff sound good, NASS has seen its budget trimmed in recent years. The agency's budget from 2017 to 2020, approved by Congress, was down about $8 million. Farm Bureau noted the agency's 2021 budget included $10 million for a pilot study to use historical remotely sensed data and precision agriculture data. AFBF stated congressional appropriators should increase investment in agricultural research and statistics "to provide NASS access to high-performance computing capacity (supercomputers), data, software, training and staff resources."

Farm Bureau also said the group would like to collaborate with NASS to help encourage farmers to participate in agency surveys and continue to help organize USDA data-user meetings. Farm Bureau also encouraged NASS to facilitate more virtual or in-person meetings with farmers and other organizations across the country.

Todd Hultman, DTN's lead analyst, was among the industry analysts who were interviewed and participated in the Farm Bureau workshops on NASS. Hultman said he thinks NASS should assign some confidence levels to some of the agency's crop estimates, based on the evidence the agency has backing the numbers. Further, reported numbers should be better clarified, he said.

Hultman pointed to the 2019 corn acreage estimate released at the end of June that year projecting 91.7 million acres planted, but deeper in the report, farmer surveys showed 83% of intended corn acreage had been planted at the time of the interview.

A similar estimate occurred in harvest 2019 when NASS reported a high percentage of North Dakota crop as "harvested," though much of that state's corn crop remained in the field, covered with snow, until spring 2020.

Along with Hultman, AFBF had interviews and meetings with several members of NASS, congressional staff, analysts and others, including Seth Meyer, formerly of the University of Missouri but recently named as chief economist for USDA.

A spokesman for NASS stated the agency appreciates its partnership with AFBF in developing the report and recommendations.

"We feel confident the items recommended in the report either are being addressed or are underway, and we look forward to enhancing our communications in the near future," said Jim Barrett, a public affairs officer for NASS. "We greatly appreciate the Farm Bureau's commitment to addressing these topics and helping us better engage producers in assuring NASS's mission of providing timely, accurate, and useful data in service to U.S. agriculture."

Barrett did not state how USDA is addressing the AFBF recommendations. 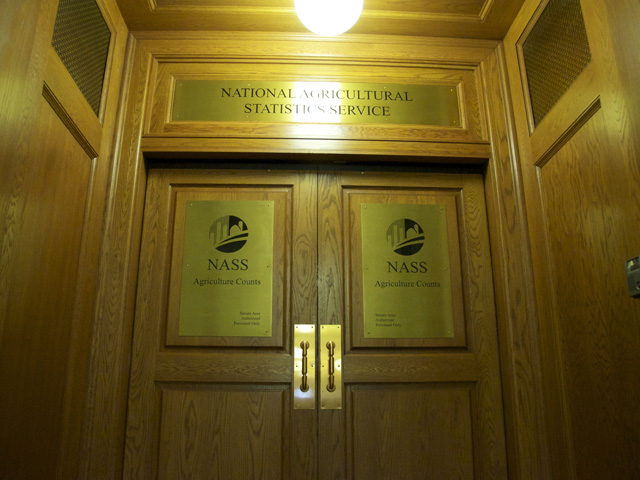