OMAHA (DTN) -- With President Donald Trump's time in office coming to a close, U.S. farmers will remember a president who spoke to them and for them more often than any other president in modern history.

Trump's policies on issues such as trade, energy, the environment and immigration heavily influenced farm prices, leading at times to criticism of the president's decisions. But the vast majority of farmers, who Trump often described as "our great, patriot farmers and ranchers," supported him throughout his tenure.

Trump spoke three straight years at the American Farm Bureau Federation annual meeting and multiple times had events at the White House that included several agricultural leaders. But it was Trump's Twitter feed where a condemnation of China's trade practices or complaints about Canada's dairy policies could send markets up or down. Trump also used Twitter to announce his administration would provide more new aid to farmers and approve year-round E15 sales.

The president leaves office with 2020 net farm income at the highest level since 2013, due heavily to direct government payments that will average just under 40% of overall farm income nationally. Still, commodity prices -- especially for major crops such as corn, soybeans and wheat -- also now are at sustained price levels not seen since 2014.

"Well, nothing like $14 soybeans and $5 corn to make you feel better about life," Ben Riensche, a farmer from Jesup, Iowa, said of the current market conditions.

Riensche said Trump brought to the presidency the perspective of someone who had run a business rather than a career in politics. He also offered an outsider mentality to the presidency. Riensche also noted that, when farmers were polled about their support for President Trump, their support often went beyond agricultural issues.

"We felt we were underrepresented, and that all of these other issues -- tax issues, border security, socialization -- all of these other things are ideals we farmers share," Riensche said. "And it wasn't just the ag issues that impacted us, it was the ideology of this president. You're looking at a group that would like to be very self-sufficient and would like to make their wherewithal by the sweat of their brow and the view that private enterprise makes things great."

Others on Twitter, responding to a question from DTN, pointed out Trump and his administration stopped the Obama-era EPA waters of the U.S. (WOTUS) rule. The president was popular for reducing other regulatory burdens and cutting taxes.

But Trump's policies -- especially on trade -- drew criticism from other farmers who said Trump's tariffs and negotiating tactics did more harm than good. Tariffs were placed on aluminum and steel imports, for starters, even from close allies.

"He definitely did what he said he was going to do," said Tom Miller, a former commodity manager at a northwest Iowa ethanol plant who now does market consulting for farmers. "And it just ended up hurting bad -- all of these tariffs and everything. You could just see the market come down, due to the export business and everything. Then, USDA was handing out money to help, but it didn't solve the problem."

Miller added, "He's partially responsible for the market rally that we've seen here. I think China depleted their reserves, and they needed to come back to the table. So, at the end of the day, maybe it worked, but it just seems like there was a lot of suffering to get there."

Early in his time in office, Trump considered pulling out of the North American Free Trade Agreement (NAFTA) altogether. Agriculture Secretary Sonny Perdue used an electoral map showing "Trump country" to explain to Trump that withdrawing from NAFTA would hurt his farmer base. Eventually, NAFTA became the U.S.-Mexico-Canada Agreement (USMCA) that went into effect last summer. USMCA could increase agricultural exports by about $2 billion to Canada and Mexico, or about a 5% bump from last year's sales of $40 billion in sales between the two countries.

Harold Shaulis, a former dairy farmer from Somerset, Pennsylvania, has been heavily involved in dairy trade promotion and was a board member for Dairy Management Inc., the dairy checkoff program. Shaulis noted most farmers disagree with him, but Shaulis said he thinks Trump "did a terrible job," especially when it comes to trade policy.

"We worked for decades trying to come up with these trade agreements, and with a stroke of one of his magic Sharpies, he gets rid of everything we've worked for," Shaulis said. "It sends a message to all countries that we are not a reliable source of product. We have the quality and we have the quantity -- the supply, price, everything that you need to compete globally -- but when you determine yourself to be an unreliable sources, based on the whims of one person, you can wreak havoc with trade."

Few areas demanded more attention from Trump and his relationship with farmers than the trade war with China. The trade deficit with China was a big focus of Trump's 2016 campaign -- though China had become the top U.S. market for agricultural products by that time. In 2018, Trump began demanding change in the relationship, banning high-tech Chinese companies and slapping tariffs on Chinese imports. China responded in kind, which included not just putting tariffs on U.S. agricultural products but effectively banning purchases of most major commodities.

Angry when trade talks collapsed in May 2019, Trump tweeted that higher tariffs would generate more wealth and it would be good for farmers. "Tariffs will bring in FAR MORE wealth to our country than even a phenomenal deal of the traditional kind. Also, much easier & quicker to do. Our Farmers will do better, faster, and starving nations can now be helped. Waivers on some products will be granted, or go to new source!"

The trade dispute ended a year ago with the signing of the Phase One Trade Agreement, which called for China to buy more than $36 billion in agricultural products over the first year. Trump's deal with China went way beyond agriculture, but he spoke more about the farmer benefits than anything else.

"I said 'I love our farmers. Let them tell me they can't do it.' I said. 'Tell them to go out and buy a larger tractor. Buy a little more land.' But I have no doubt they will be able to do it," Trump said at the signing ceremony last year.

The phase-one deal, though, came just as the coronavirus hit, effectively slowing down trade and the global economy. Through November, U.S. agricultural exports to China topped $21.7 billion, up 77% from a year earlier when agricultural exports to China were $12.25 billion. Over four full years, farm exports to China were higher before Trump took office. From 2013-16, the U.S. sold $91.64 billion in ag products to China, compared to $76.45 billion from 2017-2020, an overall decline of 16.6%. That gap will narrow some once the federal government updates December export totals.

Trump, Perdue and his team were effective at helping offset some of the trade losses with programs such as the Market Facilitation Program to provide aid that responded to retaliatory tariffs and loss of markets.

Riensche said Trump and his cabinet members -- Perdue and Treasury Secretary Steven Mnuchin -- won't get the credit they deserve for helping farmers and other businesses cash flow through the spring and summer through the array of government programs such as the Paycheck Protection Program loans and USDA's Coronavirus Food Assistance Program (CFAP).

"The linkage may not have been perfect on how payments were figured and awarded, but without the cash, food producers would have largely gone cash insolvent," Riensche said. "Non-farmers fail to realize how dangerously close we were to having a domestic and international food supply crisis." 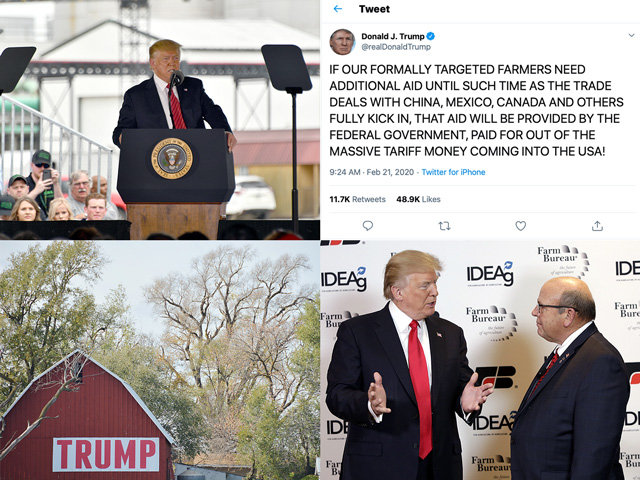