OMAHA (DTN) -- Farmers, by and large, are happy with the direction of the country under President Donald Trump, and the president's rural support helped in some key Senate and House races in battleground states in the election.

Beyond the presidential race, the most significant shift for commodity agriculture was the loss by House Agriculture Committee Chairman Collin Peterson, a Democrat, in Minnesota's 7th District. Peterson is especially in tune to complicated programs for dairy farmers and U.S. sugar policy.

Peterson, who had been in Congress 30 years, understands production agriculture and aggressively defended it, especially to the Democratic House caucus. But the western Minnesota district has been trending more Republican over the years while Peterson had continued to win because of his agricultural support.

This time, though, President Trump won all but one county in the Minnesota 7th District, which offered some coattails for former Lt. Gov. Michelle Fischbach to win the seat from Peterson, 53.4% to 39.9%. Peterson recognized he had been swimming upstream from a partisan change.

"I'd like to thank the people of the 7th District for their support over the years. Serving them in Washington, D.C., has been a great honor, and I respect their decision to move in a different direction," Peterson said in a statement. "We ran a strong and positive campaign, but with the president winning this district by 30 points again, and the millions in outside money that was spent to attack me, the partisan tilt of this district was just too much to overcome."

That's going to lead to some adjustments going forward as top staff likely will change on the committees, and the House Agriculture Committee will now have to bring in a new group of freshmen to become educated on farm policies and programs.

"You create a circumstance where, a year or two from now when we start talking about a farm bill, a guy who was able to massage and navigate and negotiate a farm bill through the process was, in large part, Collin Peterson and Pat Roberts, guys who are pretty practical folks," said former U.S. Agriculture Secretary Tom Vilsack. "That's a big deal for production agriculture."

Chuck Conner, president and CEO of the National Council of Farmer Cooperatives, said Peterson has been a sympathetic voice for farmer concerns for three decades in the House. "He's been kind of like a grandfather for American agriculture in this town," Conner said.

The reins of leadership for agriculture policy in Congress will turn over to a new group of leaders, but a group that already has a wealth of Agriculture Committee experience. Sen. Debbie Stabenow of Michigan likely will remain the top Democrat on the Senate Agriculture Committee -- with a prior stint as chairman -- and likely will remain a policy force on the committee, while Arkansas Sen. John Boozman is the lead candidate to take over the GOP side, likely as chairman if Republicans maintain the hold on the Senate.

Rep. David Scott of Georgia or Jim Costa of California are the first in line for Democrats to chair the House Agriculture Committee. For Republicans, Rep. Glenn "GT" Thompson of Pennsylvania and Rep. Rick Crawford of Arkansas are most often named as candidates to take over the top GOP spot on the committee.

The circle of agricultural policy leaders in Washington, D.C., is relatively small, and Conner said the groups will work with whoever is in control. With new freshmen on both committees, they will likely focus on oversight in 2021 to start preparing for farm bill action in the second year of the next Congress. The farm bill debate could lead to foundational changes, Conner said, depending on how the next administration and Congress want to tackle climate change.

"If Biden goes on to win this presidency, we know we're going to have a climate debate," Conner said. "And agriculture needs to be part of that debate and not try to avoid it, but participate in it. I think we have been preparing for that, literally, as we speak, and we have been for quite a while."

Vilsack agreed Congress could move ahead on some climate initiatives, such as paying farmers to sequester carbon, and Republicans could probably go along with such a move. Some of the more aggressive climate proposals from liberal lawmakers are likely going to be shelved as Democrats concede how they are losing ground in rural areas. "There will be some climate discussions, but it's not going to be the Green New Deal, that's for sure," Vilsack said.

Vilsack was part of a group of Democrats who worked aggressively to try to pull rural votes away from Trump and Republicans that did not achieve their goals. Trump again garnered strong support in rural America, as polls from DTN/The Progressive Farmer and others had projected.

Vilsack said Republicans right now have more trust in rural America and are more in line with rural voters, especially farmers, on positions such as regulation and taxes.

"Well, I can't sugarcoat this: It was a disappointing night for the Democrats," Vilsack said.

Rob Larew, president of the National Farmers Union, noted Trump remains strong in rural America, even if there is angst among some farmers over the president's policies.

"There's an endorsement, if you will, of the president's focus to doing something about the China trade situation, even if it resulted in huge negative impacts for farmers," Larew said. "There's a desire for some sort of action, and I think rural America has appreciated his attempts, if not what it actually has done for his bottom line."

In the presidential race as of Wednesday afternoon, Biden was at 248 electoral votes to 214 for Trump with Georgia, Michigan, Nevada, North Carolina and Pennsylvania still undecided. Biden would need to hold on to leads in Michigan and Nevada to claim the 270 needed for an electoral college win.

"It's always been about 270, and I think the vice president was wise in understanding that the easiest and best way for a Democratic candidate to get to 270 is by maintaining what Hillary had in 2016 and adding back what we normally have had in Pennsylvania, Michigan and Wisconsin, and he benefited from picking up Arizona and the Nebraska 2nd (Congressional District)," Vilsack said.

The Trump campaign announced late Wednesday afternoon that is suing to stop the ballot counts in Michigan and Pennsylvania.

Freshman House Agriculture Committee member Rep. Abigail Spanberger, in Virginia's 7th District, on Wednesday afternoon pulled ahead of GOP state Rep. Nick Freitas, who had been a candidate for U.S. Senate in 2018 before losing the Republican primary. After trailing all night, the late-counted vote moved Spanberger ahead of Freitas by more than 2,700 votes. Spanberger is chair of the House Agriculture Conservation and Forestry Subcommittee.

Rep. Angie Craig in Minnesota District 2 was leading her race by 9,332 votes and had declared victory.

GOP Rep. Rodney Davis in Illinois District 13 was declared a winner in his race over Betsy Dirksen Londrigan.

Rep. Don Bacon in Nebraska District 2 won a third term in a strong race against Democrat Kara Eastman despite Biden beating Trump to gain the electoral vote in that district. 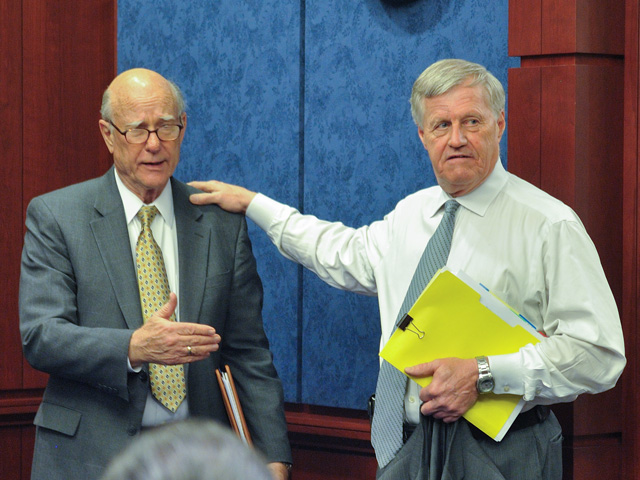