WESTON, Mo. (DTN) -- People stick with traditions for a lot of reasons, but usually they like what they are doing, and they remember their parents or grandparents did the same thing.

After an unexpected 3/4-inch of rain early on Saturday morning during Labor Day weekend, a couple of farmers just north of Kansas City, Missouri, could have been catching a last weekend at the lake or walking the nearby river trail with their dogs.

Instead, they waded through the mud and humidity with their tobacco knives, sticks and harvest spikes and fewer than a dozen local hired hands. They finished cutting, then spiked and loaded about 1 1/2 acres of Burley tobacco, took it to the barn and hung it to dry while trying to get done before the worst of the afternoon heat hit.

The tobacco had to be cut and hung, because that rain could have scalded the leaves once the sun started to beat down. That could have really damaged the quality of the Burley tobacco when they strip it and bale it about two months from now.

Mike Flora worked the field that day; he came down from his farm near Faucett, Missouri, about 20 miles north. Flora efficiently cut the stalks and hung up to five tobacco plants per stick as he moved down the row. "I enjoy manual labor, I always have," Flora said. "This is my cup of tea. These are my people."

Saturday was muddy. That rain wasn't supposed to happen. But these guys put in a day of hard farm labor and sweat for maybe 5,000 pounds of harvested tobacco. They did it mainly because they have always worked tobacco, just like their parents, grandparents and so on.

"When your crew shows up, you gotta put them to work," said Brad Hill, who shared farming the ground with another area farmer.

Hill's great-grandfather came out to the Weston area in the late 1800s from Kentucky to raise tobacco. "The ground was wore out back there and the fertilizer had been depleted," Hill said. "Out here, the ground was still fresh. I think they came out here and it reminded them of Kentucky."

"I'm the only one left who still does it," Hill continued. "But I think it's about done here."

BEFORE THE CIVIL WAR

Tobacco was grown by hundreds of farmers in an area that generally stretched from the northern edges of Kansas City to St. Joseph, Missouri, with some tobacco growers spilling over into Kansas as well. With a federal tobacco allotment, farmers around Platte County in the late 1990s were still growing about 3 million pounds of tobacco a year. Burley tobacco production peaked in the area in 1994 at 8.2 million pounds in what was considered a perfect growing season.

Once, there were three tobacco warehouses in Weston. In the early 1900s, other neighboring towns, such as Dearborn, had enough business and rail access to run their own tobacco auctions and warehouses. The annual start of sales at New Deal Tobacco Warehouse in the late fall would be packed with sellers, buyers and millions of pounds of tobacco leaves.

Most people who grew up in the area would find themselves in some way working in an area farmer's tobacco fields. Farmers, their children and other relatives would recruit area high-school kids or from the surrounding area for a crew to help during planting, topping, cutting and others stripping time to work anywhere from a couple of hours to a couple of weeks, depending on their tolerance for farm labor.

Missouri remained the western edge for tobacco production throughout the 20th Century. Acreage by the early 1990s had dropped to roughly 3,000 acres, but Missouri farmers were still growing roughly 3.8 million pounds of tobacco. The crop started to decline when USDA implemented the tobacco buyout in 2004, buying out pound allotments around the country that began in the 1933 farm bill. After the buyout, tobacco production in Missouri dwindled to about 1,450 planted acres in 2008.

In 2009, USDA stopped including Missouri in annual tobacco acreage and production reports.

Tobacco giant Phillip Morris largely held on to some contracts with tobacco farmers around Weston until 2015, but the auction days went away.

Old tobacco barns are still scattered throughout the area between Kansas City and St. Joseph, but nearly all of them have been repurposed. Corn and soybeans have taken up the tobacco acres.

Louis Smither is co-owner of the New Deal Tobacco Warehouse in Weston and grew tobacco from the time he was a kid until Phillip Morris stopped contracting in the area. Smither also keeps photographs and other history on tobacco in Platte County at the warehouse. He even co-authored a couple of books with his daughter on the area's history and tobacco barns. The tobacco warehouse now operates more as a general feed and fertilizer store, but that wasn't always the case.

"There used to be a lot of times when this warehouse had tobacco in every corner of it," Smither said. "Now we've got three tobacco farmers in Platte County. They are largely just raising to be raising it."

Weston's other tobacco warehouse, Weston Burley House, has been repurposed and is now a craft market and cigar shop that also holds events such as weddings.

Now, fewer than a handful of farmers in the area still collectively grow a handful of acres of tobacco. Hill, at one time, "grew way too much tobacco," farming as much as 60 acres of the crop, he said. His crop in 2015 "was the last big crop I raised," Hill said.

"We are the last of the hold-outs, that's for sure," said Lennie Callaway, 50, riding on a flatbed trailer heading back to the field.

MEMORIES IN THE FIELDS

Callaway grew up working in tobacco fields alongside most of his family, even though they didn't own any tobacco. A friend's dad gave Callaway a start with a crop-share arrangement on an allotment of 5,000 pounds, or roughly 2 acres. Callaway remembers getting $1.74 a pound that first year he sold his own crop. In his 20s, Callaway slowly expanded his crop-share deals and expanded the amount of tobacco acreage. "There were all kinds of deals with the landlords when I started raising it," Callaway said.

He was able to buy an 82-acre farm near Iatan, Missouri, just before he turned 30. At one time, he raised tobacco on as much as 25 acres of ground. "I started out raising that little bit of tobacco, because that was my first job. For quite a while, though, it was my living. That was the only way I could make a living off 80 acres."

Callaway now leases most of his acres to a corn farmer and farmed just about the same amount of ground as Hill this year. Callaway expects he grew about 5,000 pounds of tobacco as well, roughly the same he first raised when he got his first allotment in 1990.

Smither will call around the Kentucky tobacco companies later this fall looking for a buyer for Callaway, Hill and at least one other farmer in the area.

"It's a shame in a way. It's part of our culture and our heritage," Callaway said. "That's why I still raise tobacco -- because I'm proud of what I do." 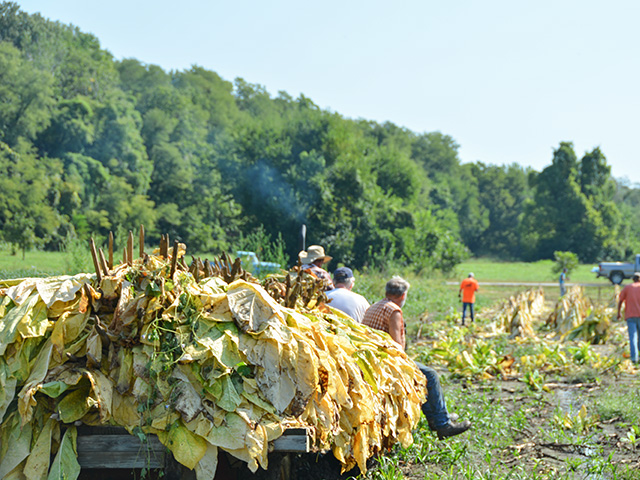