OMAHA (DTN) -- As the sun rose Wednesday, it brought with it the dawn of a new era as the U.S.-Mexico-Canada Agreement goes into effect.

Not a lot will change, and there are already some concerns about when some provisions will translate into greater market access for areas such as dairy.

USMCA could increase U.S. agricultural exports by about $2 billion as part of the forecast that the trade deal will increase gross domestic product overall by about $65 billion. Poultry and egg sales are both expected to grow to Canada. About 12% of the boost in agricultural sales, or about $242 million, is expected to come from higher dairy sales to Canada as well.

Sen. Charles Grassley, R-Iowa, pointed out the certainty for agriculture on Tuesday as he credited President Donald Trump for renegotiating NAFTA to get USMCA completed. "For President Trump, tomorrow marks the completion of another promise made and kept," Grassley said.

Yet, Grassley also said Tuesday he wants the U.S. Trade Representative's Office to use all the tools available to deal with an issue the U.S. is already facing with Mexico.

"That country has quit approving biotech traits for U.S. companies, and they have offered no satisfactory explanation for the lack of approvals," Grassley said.

Rep. Collin Peterson, D-Minn., said in a separate call on Tuesday that implementation of USMCA "is a very positive thing at a time when we need signs of positive action in agriculture." Peterson said agriculture "needs to be vigilant" because there are signs of more trade barriers on the horizon.

Dave Milligan, Michigan farmer and president of the National Association of Wheat Growers, pointed out Mexico became the top buyer of U.S. wheat under NAFTA. The USMCA deal will provide some balance with Canada now because U.S. farmers selling registered wheat varieties into Canada will no longer have their wheat priced as feed-grade levels.

"There is probably a little fine-tuning that needs to be done with that," Milligan said of the wheat trade.

John Newton, chief economist for the American Farm Bureau Federation, noted NAFTA was already good for agriculture. He pointed to expected greater access for U.S. dairy products, as well as egg and poultry sales. Other tweaks in USMCA clarify biotechnology access as well.

"From our perspective, NAFTA was good for agriculture. They made some meaningful changes in dairy, poultry and wheat, and I think we want to make sure they live up to their commitments under USMCA, especially on the dairy side," Newton said. "At this point, all eyes are on the continued success of our trade with our largest markets."

The trade agreement is expected to provide roughly 3.6% more access to the Canadian dairy market. Initially, it was expected the new access would allow the U.S. dairy industry to negotiate directly with Canadian buyers such as retailers and food-service operators. Instead, what Canada has done so far is try to funnel U.S. dairy products through just three major dairy processors.

"Probably most of those major buyers will not need the products that we now have the greater capacity to sell," Vilsack said. "So, while we have the TRQs, as long as we have to funnel through these three buyers, we're not going to be able to fully utilize the TRQ. If we were able to negotiate directly with retailers and food-service companies, we're confident that we'd be able to sell more products."

When it comes to eliminating Canada's Class VI and Class VII milk, Canada will have six months starting Wednesday to eliminate those programs, which were put in place in 2016 specifically to reduce U.S. dairy sales to Canadian processors.

Dairy exporters have already raised concerns with the U.S. Trade Representative's office to get the attention of Canadian counterparts.

"We thought this agreement was going to give us the ability to more aggressively pursue opportunities in the Canadian market, but at least at this point, that's not what the Canadians are willing to do," Vilsack said.

While Mexico has been the top market for U.S. dairy, Mexico now is implementing a new inspection process that puts "a far less onerous requirement" on its domestic processors. There are also some concerns over the state of the Mexican economy, which was struggling even before COVID-19 hit. The foodservice and tourism industries, alone, in Mexico will continue to struggle.

Even as agriculture celebrates USMCA, other trade challenges are flaring up. Earlier in June, the House and Senate parliamentarians ruled that the chambers could vote on resolutions to withdraw from the World Trade Organization. House Speaker Nancy Pelosi, D-Calif., has said the House will not take up such a measure, but the Senate still could. Some in agriculture are already expressing concerns.

"Withdrawal from WTO would be a brutal blow for American agriculture," said John Bode, president of the National Corn Refiners on a call about USMCA.

A lot of people also don't understand the significance of moving the U.S. out of the WTO, Vilsack said.

"As it relates to agriculture, essentially what it would do is put us at a competitive disadvantage from a tariff perspective," Vilsack said. "It would also make it much more difficult for us to respond to any kind of a barrier that was non-scientific -- that was not rules based." 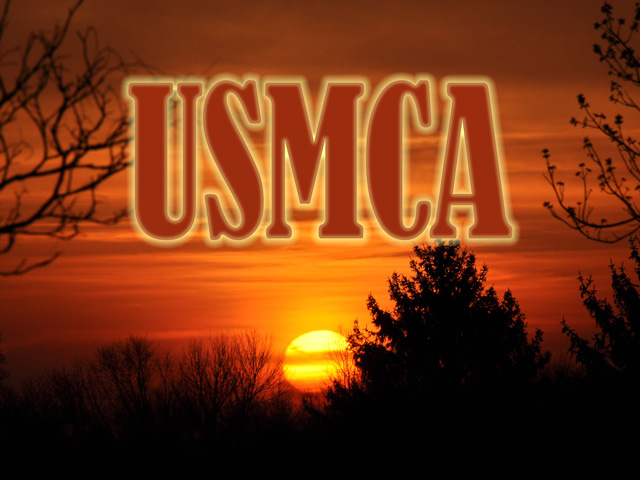