From 2019 and into 2020, American agricultural producers may feel our world is similarly plagued by strange events: floods, dicamba uncertainties, "murder hornets," a pandemic, a lockdown recession, racist violence and subsequent nationwide anti-racism protests. Fortunately, at least there's one thing we in North America don't have to worry about -- locusts.

Unfortunately for our fellow farmers in Africa and Asia, actual locusts -- a particular species called "desert locusts" -- are swarming in mid-2020 and are forecast to destroy crops from India to Nigeria, dependent on how the wind and weather develops over the next month. This week, a second generation of these swarming insects has been reported in various East Africa locations. The Food and Agricultural Organization of the United Nations, which coordinates a global response plan against desert locusts, now forecasts that the worst of the swarms will form during the last half of June.

It's likely to happen just as it was described in Exodus, when God said: "If you refuse to let my people go, tomorrow I will bring locusts into your territory. They will cover the surface of the earth, so that the earth itself will not be visible. They will eat up the remnant you saved undamaged from the hail, as well as all the trees that are growing in your fields. They will fill your houses and the houses of your servants and of all the Egyptians -- something your parents and your grandparents have not seen from the day they appeared on this soil until today."

Indeed, today's locust swarms have been unprecedented through the past 25 years, or in some regions, longer ago than that: 1986-1989, or 1967-1969, or as far back as 1944. They don't happen in any predictable cycle, like the cicadas found here in North America, but instead as a response to environmental conditions. After years of drought, plentiful rain fell in 2019 across East Africa and the Middle East. When a desert locust, usually a harmless solitary grasshopper-looking creature, notices abundant greenery after such rain, that's its cue to change its appearance from brown to pink and yellow, and to change its behavior into a gregarious swarming pest. They're each about the size of a human finger, and they eat their own weight in vegetative matter every day. In a square mile, there can be 155 million locusts covering the earth and all its contents, and a swarm can stretch across almost 200 square miles at a time. Once the swarm has eaten everything in that 200-square-mile patch, it moves onward, flying with the wind and sometimes traveling almost 100 miles per day. Take that problem, and multiply it 20-fold every three months as the locusts' reproduction cycle goes from adults to hoppers to more adults again.

Because the U.S. doesn't have huge grain trading balances with any of the countries forecast to be affected this summer (with the exception of Nigeria, our good wheat customer), when we hear about these locusts, our first instinct might be to merely say, "Gee, that's too bad," or "Where should I send a charitable contribution?" We might not immediately incorporate this factor into our outlooks for global grain supply and demand in the upcoming marketing year. In all honesty, the potential damage forecasts are still too uncertain, and most of the worst-affected regions are too small of exporters (and too poor of importers), for this to be a seriously bullish influence on global grain prices yet.

But the locust damage shouldn't be ignored by the grain markets. I added up the "grain" production (corn, wheat, barley, millet, oats, rice, rye, sorghum and mixed grain) from every country where the locust situation is labeled from "dangerous" to "caution" on the FAO's June-July desert locust forecast (in order of grain production size: India, Pakistan, Nigeria, Iran, Ethiopia, Mali, Iraq, Sudan, Niger, Burkina Faso, Kenya, Uganda, Chad, Senegal, South Sudan, Saudi Arabia, Yemen, Eritrea, Mauritania, and Somalia). Together, this wide swath of the world annually produces 426 million metric tons of grain, which is more than the United States (417 mmt), and it accounts for 16% of global grain production and 17% of global grain consumption. In other words -- not a throwaway.

Of course, it won't be 100% of all of these countries' production that will be lost. These locust swarms will function a bit like hail in the Midwest -- totally destroying entire fields for miles at a time, but leaving neighboring regions undisturbed. In India, locust swarms were noted through the month of May only in the northwest portions of the country, and the wind is likely to carry future swarms across the Arabian Sea to other countries rather than eastward to the rest of that huge country.

It's hard not to get pessimistic and assume that the world will fail to stop this problem. Technically, the 2020 locust population is still considered an "upsurge" and not yet a "plague," which is the term for the worst level of locust infestation, when desert locusts can cover 20% of the Earth's land surface and threaten the agriculture of 10% of the world's population. From January through early June, nearly half a million acres have been treated with pesticides, but that's not nearly enough when there are perhaps 7.4 billion acres where the locusts could be -- most of them remote, difficult to access, and with extremely limited resources, including trained agronomists, pesticide applicators, and of course: money.

Therefore, there will be implications to the global grain supply. Wheat harvest is currently underway in India and Pakistan, which has declared a national emergency because of the locust damages to their crop. From a food security standpoint, it's even more alarming to consider the grass and forage that is being destroyed by locusts -- food sources for the livestock that rural families crucially need to survive.

Back in biblical times, there was a known, simple fix for Pharaoh to make the plagues stop: All he had to do was listen to Moses and release the Israelites from slavery. We don't have such easy answers for any of the world's current problems. 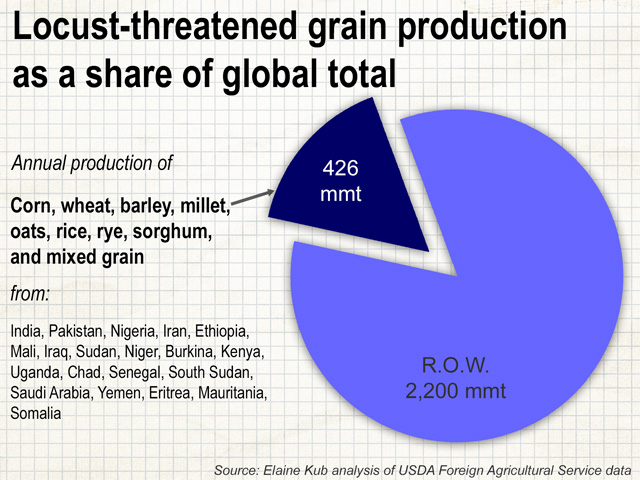