ARLINGTON, Va. (DTN) -- Despite great expectations of high export sales to China, USDA's initial outlook for 2020 crops, exports and prices does not factor in the idea of $40 billion in new agricultural sales to China.

USDA's initial outlook for 2020 crops projects higher acreage for both corn and soybeans -- taking up a significant amount of last year's prevented planting acres -- with soybean prices up slightly but corn prices expected to come down.

Surprisingly, Johansson's outlook for exports did not show a significant rise due to the phase-one trade deal with China. USDA projects $139 billion in exports in fiscal year 2020, up $4 billion from 2019 numbers. Johansson cited that "nearly all of that increase is due to higher projected exports to China." Johansson also noted the U.S. has reached trade deals with China, Japan, Mexico and Canada. Those four countries combine for 51% of all agricultural exports, leading to a more bullish export forecast.

Johansson's projection of $4 billion more in exports does not jibe with the projected $40 billion in agricultural export sales to China as part of the phase-one China deal. Agriculture Secretary Sonny Perdue addressed that discrepancy during a press conference. He noted Johansson was basing his analysis on the February World Agricultural Supply and Demand Estimates (WASDE) report, which did not contemplate the phase-one agreement.

"If you read the preamble to that report, you'll read that contemplation of phase-one agreements was not included in that way," Perdue said. "We expect to exceed that certainly. But they had to put it out based on the WASDE report, on what they knew at that particular time. Obviously, they had no idea about the coronavirus either. So those are estimates. I expect exports to be much greater than that. It does not [include phase one]."

Perdue added he expects to see exports rising later this spring, and those will be reflected in USDA reports. Depending on the impact of the coronavirus, Perdue said, "In the spring, we'll see it (exports) start ramping up."

The secretary added, "We've got hard-line numbers on an annual basis, and we expect China to live up to that. Ambassador [Robert] Lighthizer has, in the agreement that is signed and dated, it has hard-line enforceable numbers that are unilaterally enforceable by the implementation of more tariffs if they don't live up to that."

Perdue also was asked whether the lack of export growth would lead to another year of Market Facilitation Program payments. The secretary reiterated comments he has made all winter that he does not expect an MFP payment for 2020.

"The market will handle, by-and-by, the pricing of products and commodities as we go forward," Perdue said. "Again, if we have other trade disruptions, that may be a possibility of another Market Facilitation Program, but right now, it doesn't look like we'll do that with the phase-one agreement and moving forward.

"So I would not anticipate -- and I'm not advising any farmer to expect -- a Market Facilitation Program at this point. They have got to farm for the market and what it's telling them and what their capabilities are from a production perspective."

Johansson noted crop acreage in 2019 was 16 million acres lower than expected because of persistent, wet conditions. Despite the forecasts of another possible wet planting season in at least part of country, USDA expects significantly higher acres in 2020.

"An important question being asked is, 'Where will all those acres go that were not planted in 2019?' We would expect a good portion of those to go to corn and soybeans in 2020," Johansson said.

With prospects boosted by trade, soybean prices are forecast to rise 5 cents a bushel to $8.80 a bushel.

"The soybean price will be supported by lower stocks compared to last year's record level, but increased South American production and exports, as well as a strong dollar, will weigh on the market," Johansson said.

In contrast, higher corn acreage and expected return to trend yields are causing USDA to project prices to fall 25 cents per bushel to $3.60.

Wheat prices are projected up 35 cents per bushel to $4.90. Acreage for wheat is projected to remain flat at 45 million acres, roughly the same as 2019.

Still, the world growth forecast is slowing down, he said. The coronavirus is a top macroeconomic concern. Chinese consumer spending is expected to be lower, especially in the first quarter. That could prompt some scaling back by Chinese consumers buying more expensive protein items such as pork, Johansson said.

Johansson pointed to greater global agricultural competition and projections that Brazil will produce a record soybean crop of 4.6 billion bushels as well as a 4-billion-bushel corn crop, largely from the country's second, "safrinha" crop.

"These increased second-crop acres and improved northern port infrastructure in Brazil have increased the competition U.S. corn faces in global markets right at the time of the harvest in the U.S.," Johansson said.

Overall, Johansson said, fundamentals for many farmers look better than they did in 2019. Net farm income in 2020 is expected to rise slightly from $93.6 billion in 2019 to $96.7 billion. The difference will be an increase in changes in crop inventory, USDA stated. 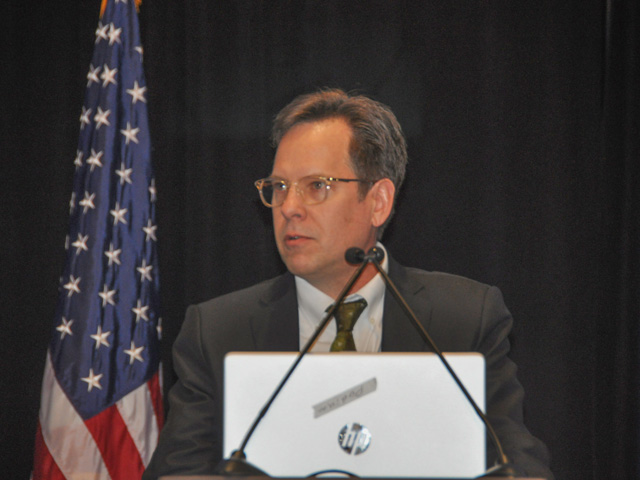