OMAHA (DTN) -- Optimism has fallen out of the commodity and stock markets as the number of infections rise from the coronavirus in China, which has spread to the U.S., Canada and now at least 13 other countries.

Coronavirus is a respiratory illness with symptoms of coughing, fever and shortness of breath. The Centers for Disease Control states the outbreak that began in the city of Wuhan in the Hubei province likely came from contact with animals with a possible link to seafood and live animal markets in the city. Since then, the virus has begun to spread person to person. (https://www.cdc.gov/…)

Five cases of the coronavirus have been confirmed in the U.S., according to the Centers for Disease Control, with one in Arizona, one in Illinois, one in Washington state and two in California. The CDC on Monday reported 110 people are being watched for possible cases of the disease in 26 states out of roughly 2,400 people the CDC has screened. The majority of them traveled to Wuhan, while some may have had close contact with a person who traveled to Wuhan. The focus is people who traveled from Wuhan who have respiratory problems and/or a fever. Canadian officials also reported two cases of the virus.

Weekend trade saw soybeans down as much as 14 cents per bushel before they began to stabilize and rally, but most soybean contracts were still 9 1/2 cents below their open at midday Monday. Corn prices also fell more than a dime a bushel before seeing some slight rebound. As Monday trade continued, some of the emotion began to scale back, said DTN Lead Analyst Todd Hultman.

"It looks like it has moderated a little bit from last night and this morning as people think things through," Hultman said. "The big overriding question is whether the disruption from the spread of coronavirus and the resulting death toll will be a large enough issue that it significantly impacts world food demand. And we're a long way from those numbers so far. So this is all about potential and just how long and fast this virus spreads."

The impact of coronavirus could affect U.S. commodity prices for several months as it spreads and China concentrates its efforts to quell the disease, Hultman said. Given that China's phase-one agreement purchase pledges were based on market considerations, it could quickly become more difficult for China to meet those goals, he said.

"It's just hard to see anything near-term where China is going to go out and buy aggressive amounts of food products."

Hultman noted there were a lot of unknowns right now about the potential severity of the disease.

Pointing to the price decline in soybeans, there are some concerns the virus could have a broader impact on the Chinese and global economy, wrote Todd Hubbs, a clinical assistant professor in agricultural commodity markets, in a weekly outlook on the University of Illinois FarmdocDaily page (https://farmdocdaily.illinois.edu/…).

There was already some skepticism over the capability of China to meet the dollar amounts put forth in the phase-one trade agreement, and that gets exacerbated by any reduction in Chinese economic growth, Hubbs added.

"Uncertainty about the effect of the coronavirus outbreak on economic growth in Asia may stay around for a while."

China has increased quarantines and other emergency procedures to stop the spread of the virus. China also extended its Lunar New Year holiday until Feb. 2, and some major port and trade cities such as Shanghai have ordered businesses shut down even longer, according to the Associated Press. Chinese officials also announced a national ban on selling wildlife, which is believed to have been a source of the virus.

A CDC official called the coronavirus a "rapidly changing situation" in the U.S. and abroad. A CDC official also stated there is no risk of catching coronavirus from imported goods, based on how the virus is transmitted.

The State Department on Monday issued a travel advisory, stating people should reconsider any travel to China and warning people not to travel to the Hubei Province because of the quarantines and disease around Wuhan. The U.S. embassy in China also was planning a single flight out of Wuhan on Tuesday for American citizens to get out of the area as quickly as possible. Other countries were making similar travel arrangements.

Sen. Chuck Schumer, D-N.Y., called on the U.S. Department of Health and Human Services to designate a formal public health threat in the U.S.

At least one congressman, Rep. Paul Gosar, R-Ariz., tweeted Monday that the U.S. should consider a temporary travel ban on travelers from China until the virus is controlled.

"If #Coronavirus is as contagious as recent reports suggest, we need @CDCGov and @DHSGov advising Congress and @POTUS on how a quarantine would be implemented," Gosar tweeted. 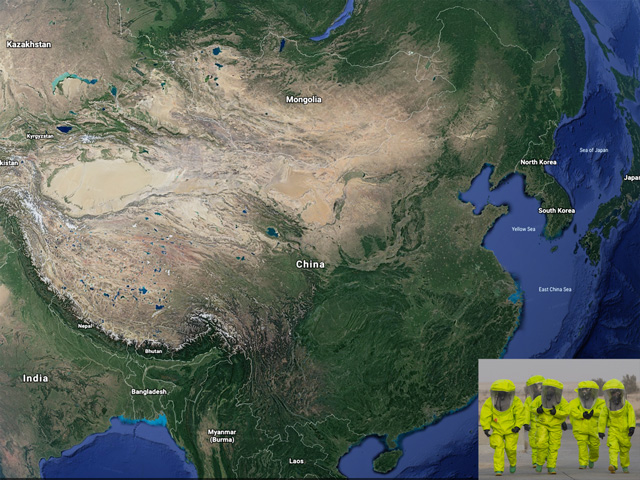