Whether it's waiting for the plant matter in the field to dry down naturally at an oh-so-slow pace in cold, damp weather, or waiting for space to open up in mechanical grain dryers and aerated bins, the bottleneck is clear. The maximum pace that corn can be delivered this year is dictated by how fast the corn can be dried.

This has implications for market prices. The latest nationwide survey of crop progress showed just over half of U.S. corn fields have been harvested as of Nov. 3, when the industry can typically expect to see three-fourths of the harvest complete by now. Right when the elevators are prepared for the gut slot of harvest, and at the time that they typically expect to be frantically loading trains and barges with new grain, they're just not receiving grain in the amounts expected. Rail traffic of grain carloads continues to run 20% to 15% behind its average pace for this time of year.

Elevators that previously committed themselves to shipping out large amounts of grain might have felt slightly panicky last month, and that was clear in the extraordinarily strong basis bids noted across the Midwest. Iowa ethanol processors were posting basis bids of zero cents (i.e. paying a cash price equivalent to the benchmark futures price) at various points lately, and the national average corn basis bid is still 15 cents under the December contract -- unheard of strength for the midpoint of harvest. Of course, the real fireworks are in Ohio and eastern Illinois where the scarcity of planted acres has predictably translated into a scarcity of harvested bushels, resulting in elevator basis that are anywhere from 20 cents to 35 cents over the December contract.

Sure, those basis bids sound great from the perspective of a producer who needs to sell some grain at harvest. There are always cash-flow needs at this time of year (and because farmers heard from us analysts all summer to wait, wait, wait: prices are going higher), let's assume some portion of this year's harvested grain is indeed being sold across the elevator scale at today's spot prices. Unfortunately, nobody really wins in this strong basis environment. For one thing, it makes it more challenging for grain companies to resell the grain to end users at a profitable margin. For another thing, the reason there is such strong basis (wet corn, slow harvest) is also the reason farmers get hit with stiff moisture discounts before they get to cash the check.

Ideally, corn needs to have less than 14% moisture to have a reasonable chance of being stored in a bin for several months without spoiling. Many (or even most) of the harvest anecdotes I've been hearing -- especially from anyone in the northern tier of the Corn Belt -- suggest that the corn in the field is still at 20% moisture or more. Each elevator and corn end user will have its own shrink and moisture discount schedule, so everyone's own results will vary when it comes to calculating costs and losses from this problem. However, I chose one illustrative example from southern Minnesota, which is a representative region plagued by frost and precipitation:

-- The posted bid at a local elevator is $3.50 per bushel for corn (32 cents under the December contract). Great.

-- The direct cost of production for 190 bushels per acre (bpa) of corn in Minnesota is estimated at $3.22 per bushel, not including overhead, labor or trucking. Assuming the grain producer can live on nothing and work for free, that almost sounds profitable. Let's say it takes $0.08 to truck the corn to the elevator to get that $3.50 price tag.

-- But wait. Let's say the corn tests at 18% moisture. The elevator will need to account for how much the wet grain will shrink, and will therefore only pay for the equivalent amount of absolute dry matter that will still be in that corn once it's down to 15% moisture. That takes about 4% off the weight in the truck. The elevator's discount will be calculated in pounds or bushels and not actual cents, but to simplify matters, let's say the shrink is equivalent to $0.12 per bushel off the check.

-- Also, the elevator will need to pass that wet 18% corn through a grain dryer before it stores it or ships it as No. 2 yellow corn. Drying grain legitimately costs money, in the form of high-priced fuel to run the grain dryer (more on that later). Therefore, to recoup that expense, the elevator will also discount $0.0225 per bushel per half percentage point of moisture above 15%. There are six half points between 15% and 18%, so let's say that moisture discount is another $0.135 per bushel off the check.

Again, individual results will vary and grain producers who have their own facilities to dry down grain will generally prefer to do that instead of taking the shrink and moisture discounts from their local elevator. That is, if they can even buy the propane to fuel their grain dryers. A cold forecast and widespread reports of fuel scarcity in the Midwest suggest that the costs of drying grain -- the same costs that are eating up any potential profit margin for the grain producers -- are unlikely to diminish through the last half of harvest.

It may look like the late harvest is bullishly influencing grain prices, at least in the cash market if not on the futures charts. But ultimately, all that strong basis and potential profit margin tend to get burned off, like steam from a hot grain dryer on a cold November morning. 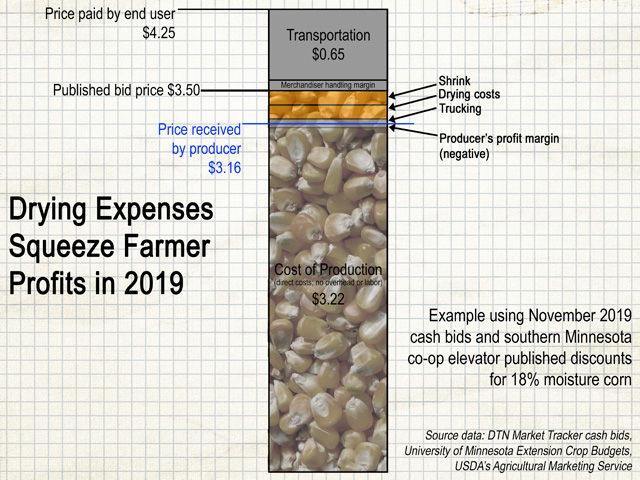