NEBRASKA CITY, Neb. (DTN) -- The U.S. Army Corps of Engineers is warning residents throughout the Missouri River watershed that the risks for spring flooding in 2020 remain high.

This week, the Corps has been holding fall meetings throughout the Missouri River Basin as a normal course of business to detail projected water storage, anticipated precipitation and flood expectations for next spring.

For roughly 100 residents who showed up Thursday night in Nebraska City, the event was an emotional release and a chance to demand change in the Corps' management and vent over the more than eight months of floodwaters with some farms and homes still under water.

Alice Hodde, who farms with her husband in Fremont County, Iowa, has seen her home lost and farm income wiped away twice in eight years. Hodde said she and her husband, Lyle, both in their late 60s and early 70s, are too old to start over.

Alice Hodde said farmers are stressed emotionally, and she is concerned about suicide risks.

"Do you know the human toll this takes on a farmer?" she asked the top Corps official at the meeting. "We can't start over. We're too old ... I think something needs to change."

Alice Hodde said a small group of people affected in Fremont County had written more than 800 letters to federal officials, seeking to change how the Corps manages the river.

Looking at conditions in the basin right now, the major water-holding dams at Fort Peck, Montana, Garrison Dam in North Dakota and Oahe Dam in South Dakota all are storing roughly 6 feet to 7.5 feet above normal reservoir levels.

On the ground, soils are considered "extremely wet" throughout the upper basin in Montana, North Dakota and South Dakota, down into a large section of Nebraska as well. Those wet soil conditions are likely going to carry into spring and translate into higher runoff.

Rainfall levels in both the last six months and the last 12 months have been above normal across the Missouri River Basin. South Dakota has hit record levels of rainfall over the past year.

"Throughout the entire basin, it has been an extremely wet year," said Kevin Grode, who leads the Corp's reservoir regulation team for the Missouri River Basin.

And precipitation forecasts remain high. At a regional NOAA call earlier this month, Doug Kluck, regional climate service director for the Midwest, stressed that not only is the basin saturated with high soil moisture, but the region also has an increased chance for higher-than-average precipitation through January.

"Anything that falls will have complications to it," Kluck said on a webinar. "What we need is an extended period of dryness in a warmer time of the year to dry the soils out."

The Corps currently is releasing 80,000 cubic feet per second (cfs) from the Gavins Point Dam in South Dakota, the final dam in the Missouri River system. The Corps has maintained high flow volumes since the "bomb cyclone" in mid-March that hit South Dakota and Nebraska. The Corps anticipates the 80,000 cfs releases will remain that high through the end of November, then the flow volume will be brought down. Still, winter releases will remain high to drain about 1 million acre feet of water out of the dam system before spring runoff begins to hit.

"We're going to evacuate the flood-control storage, and we're going to be as aggressive as we can," said John Remus, chief of the Missouri River Basin for the Corps.

Remus said it's critical for the six dams on the river north of Iowa to have as much storage capacity as possible going into next spring, noting there is still a great deal of work needed to restore the levee system. At least some federal levees right now aren't expected to be fully repaired until next summer.

Residents frustrated with the flooding recommended the Corps either hold more water in the dam system to reduce river flows or keep higher flows going longer into the winter as a way to open up the dams to store higher volumes of spring runoff.

Remus stressed the dams are based on a "what goes in has to go out" focus annually.

Throughout the year, the Corps has released more than 61 million acre feet of water, more than twice the average volume of 25.4 million acre feet. By the end of 2019, volume releases for the year could top 2011, which was a record volume.

From Sioux City to St. Louis, more than 300 miles of levees were damaged in this year's flooding, which included 40 levee breaks just in the Corps' Omaha District. While some levees in Iowa have been plugged, others levees, such as levee "536" in Atchison County, Missouri, likely won't be completely repaired until next summer, Corps officials said.

The Corps has been operating on a three-prong approach for recovery from current flooding on the river. The first focus is to close the breaches, then work to build the levees back to authorized height. The Corps received $1.1 billion in supplemental funding from Congress last month to help with flood recovery.

After that is done, the Corps intends to take a long-term holistic study of the Missouri River system that could take from three to five years to complete. That study would look at long-term adjustments to levees, possibly bringing non-conforming agricultural levees into the federal system and tackling choke points in the river system.

There were a lot of concerns about whether the basin can wait as many as five years for a study, which then might lead to congressional funding and action to better protect the basin even further into the future after the study is completed.

Speakers in Nebraska City pushed hard on the Corps to change its 2004 master manual for the Missouri River. Farmers and others believe one of the reasons flooding happened in 2011 and 2019 was because the Corps gives too much deference to the U.S. Fish and Wildlife Service for endangered species habitat restoration in the 2004 manual.

"Let's go back to the 1979 manual," said Leo Ettleman, a farmer in Fremont County, Iowa. He added, "We have got to get Fish and Wildlife out of the management of the Missouri River or we will continue to flood, and that's all there is to it."

Remus was reluctant to consider changes to the master manual. He said such changes would have to come from Congress or a federal judge ordering the Corps to change the manual.

Speaking to DTN after Thursday's meeting, Remus said the Corps looked at changing the manual after 2011 to factor in climate changes that have intensified rainfall in the northern part of the watershed. That didn't happen, though, and the Corps right now does not factor in a changing climate to consider how to manage the river.

"As long as what comes in must go out, the longer you hold it, the higher the flows are in the fall," Remus said. "You may be causing flooding as many years as you are preventing it."

Other residents questioned whether the flooding was happening as a way for the Corps and U.S. Fish and Wildlife to take away farmland. The Hoddes, for instance, lost 600 acres in the 2011 flood that had to go permanently into a wetlands program. Remus said he could not talk about issues such as taking of land because of ongoing litigation. 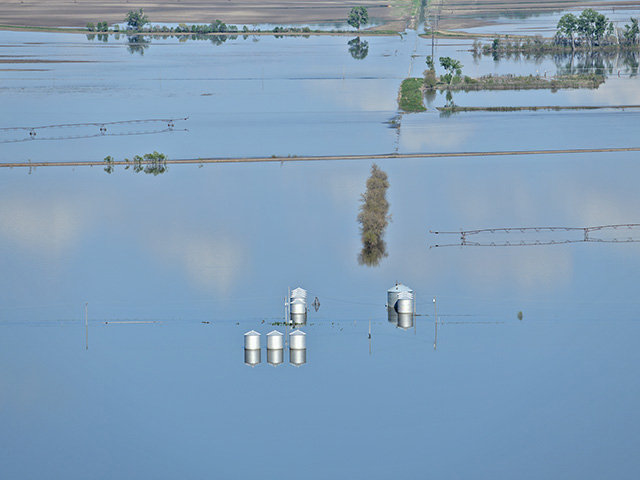