"The green plain ran till it touched the skirts of heaven." The words are from the book "Across the Plains," by author Robert Louis Stevenson, who rhapsodized about the Platte Valley of Nebraska after an 1879 train trip through it.

"Along the track, innumerable wild sunflowers no bigger than a crown-piece bloomed in a continuous flower-bed," Stevenson wrote. "Grazing beasts [buffalo and antelope?] were seen upon the prairie at all degrees of distance and diminution ... Now and again we might perceive a few dots beside the railroad which grew more and more distinct as we drew nearer till they turned into wooden cabins, and then dwindled and dwindled in our wake until they melted into their surroundings."

These were the homesteads of some of the first hardy farmers in the valley. In those early times, immigrants came for the cheap land, broke the sod and prayed for survival.

HOW TIMES HAVE CHANGED

Today, the valley Stevenson described is one of the premier row-crop-farming regions in the world. The Platte Valley is a corn and soybean paradise, nourished by deep soils and watered by both the Platte River and the Ogallala Aquifer, which lies close to the surface. Come summer, center-pivot irrigation systems sweep the fields like hands of a thousand clocks, spraying yield-boosting water. Farmers in the Valley now irrigate more than 1.8 million irrigated acres of corn.

It's not a coincidence Nebraska calls itself The Cornhusker State. In recent USDA data, it ranks third in the U.S. in corn production, and the fertile Platte Valley contributed mightily to that ranking. Nebraska, aided by the Valley, is the No. 1 popcorn state. It ranks sixth for soybean production and is second in cattle and calf inventories. Much of the Valley's corn supplies about 20 local feedlots, with a total capacity of more than 227,000 head.

Plentiful water for irrigation takes some of the gamble out of crop production in the Valley, which makes it a haven for corn seed production. "The risk-management aspect [of the Valley] is the primary reason it is so incredibly important to us. You can always depend on it," said Darin Doerr, regional production lead for Corteva Agriscience, Agriculture Division of DowDuPont, which owns the Pioneer brand. The company has so much confidence in the Valley and its farmers, it maintains three major seed production plants there.

The Creator might have had a highway in mind when he made the Platte River Valley. Since before the memories of men, millions of birds have used the shallow waters of the Platte River as a migration resting place when heading north and then again south. The sight of semiannual flocks of whooping cranes in the Valley attracts spectators from around the world.

Similarly, primordial herds of buffalo that roamed the Valley floor attracted Native tribes -- Sioux, Cheyenne and others. Beginning in the 19th century, white explorers and trappers entered the Valley and headed westward.

By the 1840s, the Valley served as a pathway for adventurers headed to western gold fields. Joseph Smith led his Mormon followers through the Valley on the way to the promised land in Utah in 1847. The first pioneers on the Oregon Trail trudged through the valley in 1843. By the 1860s, some 400,000 men, women and children had followed the trail.

In 1866, the nation's first transcontinental railroad laid its beginning tracks near Omaha and headed west. The project's chief civil engineer was Glenville M. Dodge, who, standing on a hill in eastern Nebraska, surveyed the valley below and said, "The Lord had so constructed the country that any engineer who failed to take advantage of the great open road ... would not have been fit to belong to the profession."

In the mid-20th century, modern engineers came to the same conclusion. They plotted Interstate 80 straight through the Valley.

LAY OF THE LAND

If you draw a swooping line from the city of North Platte in southwestern Nebraska to the village of Plattsmouth on the Missouri River in the southeast, you'll have outlined the Platte River and its wide valley. In that graceful arc lie some of the most productive soils in the world -- deep silt loams, black clays and organic matter several feet deep.

Nature made the Platte River Valley, but railroads built it. Abraham Lincoln got onboard with the concept of a transcontinental railroad soon after he became president. The Civil War sidetracked the idea, but when the war ended, Congress formalized the plan. It handed railroads ownership of 20 sections of land (12,800 acres) per mile of finished track. The government retained half the remaining sections to sell or give away to homesteaders.

That decision -- and the fact that the railroad and the U.S. Army had largely pushed out native tribes -- created a land rush of sorts. Suddenly, settlers in search of superior farmland no longer had to transit the Valley on the way to Oregon.

Union Pacific Railroad and its agents actively recruited immigrants, both American and European. Advertising was especially heavy in Scandinavia and Germany. As a result, many Nebraska farmers today trace their ancestors to northern Europe.

In 1881, German immigrant Diedrich Wessel came to America and put down roots in York County in 1905. His grandson David later decided to celebrate the farming history of the area by bequeathing his estate to what would become Wessels Living History Farm.

Since the early 2000s, the farm has given thousands of visitors a year a glimpse of farm and rural Nebraska life a century ago. Exhibits include a house built at the turn of the 20th century, a Lutheran Church relocated from 16 miles away and a massive hay barn with room for 10 teams of horses.

Groundskeeper/docent John Carlson, whose grandmother emigrated from Sweden as a 16-year-old, gives tours of the farm. It's a labor of love and a way to honor immigrants who braved the unknown to seek a new life in America. "Can you imagine getting on a ship with a trunk containing all your possessions?" Carlson asked.

Steve Peterson's grandfather Telander Peterson emigrated from Sweden in 1897. He later settled in the area near Stromsburg, in the northeast part of the Valley, and by 1917, he felt established enough to build a new house where he raised 12 kids. "Six boys, six girls," Peterson said. "All the boys farmed, and most of the family is still in the area."

That includes Steve and his son Quinn, who farm together with extended family members Ryan Peterson and Roger David. They plant 3,300 acres -- almost all under center pivots -- to commercial corn, seed corn for Pioneer and soybeans. The target goal for commercial corn is 260 bushels, and Peterson said, "I'm not happy if we don't get it."

The family uses technology that would make his grandfather's head spin. Auto guidance is almost a given these days. So is prescription planting. Peterson uses John Deere's Machine Sync technology, which lets his combine and grain cart tractor wirelessly communicate while unloading. Perhaps more important, the family stays current on irrigation technology. "We do a lot better job with our water usage than we used to," he said.

Peterson uses soil-moisture probes and sprinkler heads designed to cut evaporation. New seed varieties also have helped a lot. "We are probably using 50% less water than we did 20 years ago to raise more bushels ... probably double the bushels on half the water."

A few miles from the Peterson farm in Gresham is the Tonniges farm, operated by Doug, his brother Larry and Doug's son Eric. Doug and Larry's grandfather emigrated to the Valley from Germany about 100 years ago.

Like the Petersons, the Tonnigeses take advantage of the Ogallala Aquifer to irrigate about 80% of their 4,000 acres of corn, soybeans and seed corn grown for Pioneer. Their wells are only 100 to 200 feet deep, and in rainy years, they don't have to run them much, "Which helps the bottom line," Doug said.

Also, like the Petersons, the Tonnigeses are willing to experiment. They started center-pivot irrigation in the 1970s -- when it was a new idea -- and now use a variety of technologies to limit irrigated water use. They recently have begun strip-tilling to better target fertilizer inputs. Conventional tillage still works, Doug Tonniges said, so "we make [tillage] decisions on a case-by-case basis."

Farmers like the Petersons and the Tonnigeses -- descendants of immigrants -- are part of the recipe that makes the Valley so productive, explained Pioneer's Doerr: "Add to everything else the progressive farmers we have here, and it's an unbeatable area to grow seed. That's why we are here." 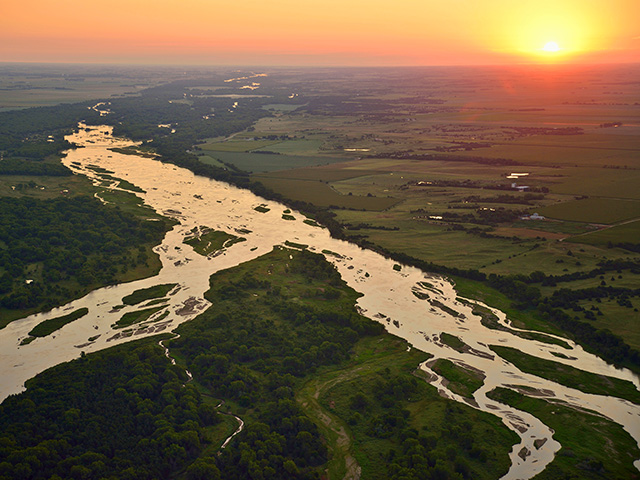