OMAHA (DTN) -- With much of the Corn Belt facing a late-maturing, high-moisture crop, some farmers are already making plans to dry their grain this fall. That means they'll likely need to purchase propane -- if they haven't already -- to fuel their grain dryers.

Late summer and early fall is the time many farmers lock in propane prices for the grain-drying season. With a wet spring delaying planting this year, especially in the Eastern Corn Belt, there could be a lot of wet grain to dry this fall.

Right now, propane prices are low thanks to high production of the fuel, according to propane analysts. But high demand for propane during harvest followed by a cold winter could push prices higher.

There is a good supply of propane in the country as fall harvest begins, said DTN Refined Fuels Reporter Alton Wallace. That has been the case in the U.S. since the beginning of the "Shale Revolution" in 2012, which has allowed the country to dramatically increase crude oil and natural gas production, he said.

According to U.S. Energy Information Administration (EIA) statistics, propane production in the U.S. is now roughly about 1.8 million barrels per day (bpd). And production is continuing to increase, Wallace said, growing by 8.3% from 2017 to 2019.

"We have a lot of propane right now," Wallace said.

One doesn't have to be an economist to figure out that if supply outpaces demand, prices will decline, Wallace said. In mid-August, for example, the price of propane at the Conway, Kansas, hub fell to 37 cents per gallon, a three-and-a-half-year low, he said. In mid-September 2018, the price at Conway was near 78 cents a gallon.

With propane production at record levels, the market is in an oversupply situation, and prices have been less volatile than in the past, Wallace said.

"The U.S. has become an energy superpower because of the Shale Revolution," he said.

While it appears likely that propane prices will be fairly low this fall, there are some factors that could drastically alter that outlook, Wallace said.

The propane market can see increased volatility due to the weather, Wallace said. As history has shown, extremely cold winter weather can cause an increase in propane demand and prices can skyrocket quickly. A harvest season in which farmers need more propane to dry down wet crops followed by a cold winter could create a situation where propane prices move considerably higher, he said.

Another factor that could affect propane prices is the burgeoning export market.

Because of its increased propane production, the U.S. has become a major exporter on the global market, Wallace said. EIA data for the week ended Sept. 13 showed U.S. propane exports at 1.162 million barrels per day.

Wallace said companies are building export facilities as this is becoming an important component of the market. The downside to increased propane exports is if export demand for propane rises, those buying propane in the U.S. -- such as farmers -- are forced to compete for availability with the export market, he said.

SOME BOOK PROPANE, SOME DON'T

In August, DTN asked readers about their propane-buying habits. This question was posed in the DTN 360 Poll: "As propane production has increased and domestic demand has been flat, the price of propane has dropped to half its value during the past 12 months. Some farmers may be thinking about their propane needs for the upcoming crop drying and heating. What is your plan for propane this late-summer/fall?"

This week, Mark Nowak, a farmer and ag consultant from Wells, Minnesota, told DTN his propane dealer was set to visit him the same day to preorder some of his propane needs. He was set to lock his propane price at $1.08 per gallon, which he said was down from last year ($1.19 per gallon) and 2017 ($1.13 per gallon).

There could be a lot of crop drying needed this fall across the Corn Belt, Nowak said. He estimated that most of the corn will black layer by Oct. 1, and thus, the moisture at that time would likely be around 32%.

"I think the month of October is going to be the wildcard here," Nowak said. "If we continue to see this warm and dry weather, I think the crop can dry down pretty good. But if we see cool and cloudy weather, maybe we will be doing a lot of drying."

CROP MOST BEHIND IN EASTERN CORN BELT

Corn and soybean planting was delayed across much of the Corn Belt this spring by wet field conditions, but one region where this was especially true was the Eastern Corn Belt. Areas in Illinois, Indiana and Ohio saw much rain, which pushed planting to as late as the summer in some cases.

Brian Scott, who farms near Monticello, Indiana, said his region will see a late harvest this fall. He estimated harvest could be around a month later than normal.

"We have a lot of corn that probably won't black layer until mid-October," Scott told DTN.

Scott said the grain dryers in his region are going to be used this fall. It has been a couple of years since they last used their grain-drying equipment, he said.

Scott booked propane earlier this summer -- not necessarily because of the amount of drying that could take place this fall, but to take advantage of a summer-fill discounted price. He topped off his 4,000-gallon storage tank like he normally does, he said.

There are other farmers who are planning for the increased demand for propane this fall, Scott said. He said he knows of one farmer who built a new propane storage facility so he could get a good price on propane this year. The new facility will allow him to take a full semi-truckload of propane, Scott said.

Another farmer who already booked some propane was Mike Cooprider of Howesville, Indiana. He planted his corn from May 18 through June 5. However, he wasn't able to plant his soybeans until July 15.

"Like most farmers, we are praying for a long fall," Cooprider said.

Cooprider said he dries "a lot of corn" every fall, but this year, he could be drying all of his corn crop. For that reason, he has already filled the propane tanks at his bin sites, he said. 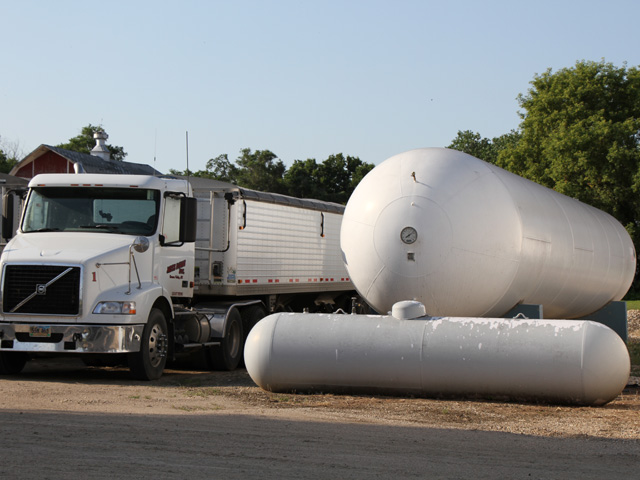