OMAHA (DTN) -- In an evening-long event on climate policies, Democratic candidates said farmers and agriculture can be a solution to climate change, but criticized large scale agriculture and food production at the same time.

Until the event, climate had only been a small slice of questions at Democratic debates. The Democratic National Committee rejected requests for a debate centered around the topic, so CNN gave each candidate roughly a half hour to talk about their plans.

Candidates were split among carbon taxes and cap-and-trade plans, but each said a larger policy such as those would be needed to lower greenhouse gas emissions. The candidates largely agreed they would ban offshore drilling, and freeze or pull oil leases on federal lands. There was more division on fracking natural gas as some candidates would ban it while others said natural gas is needed as a transitional fuel to shift from coal and oil to renewable energy.

When it came to food and agriculture, CNN's hosts and guest questioners were aggressively engaged in asking about policies surrounding cattle emissions, even though U.S. livestock accounts for just 3% of the nation's greenhouse-gas emissions. There was a lot of discussion on dietary guidelines and linking U.S. agricultural interests to Amazon deforestation and fires.

Sen. Kamala Harris of California, when asked about dietary guidelines, said she put a priority on sugar consumption and healthy eating. She would also consider environmental impacts of food production tied to dietary guidelines. "I've worked on this issue in the past, and it is about consumer awareness also," she said.

American consumers need more information about the health implications of food choices, and we need to expand information to include the impact on the environment, Harris said.

Pointing to the Amazon fires, Sen. Amy Klobuchar of Minnesota was asked how young climate activists could trust her as president, given that she comes from a large dairy and livestock state. Returning to the Paris Accords would give the U.S. more clout with allies dealing with issues such as the Amazon, Klobuchar said.

"I am hopeful that we are going to be able to do this in a way, especially when I am president, that we can continue to have hamburgers and cheese," Klobuchar said. "But at the same time, understand there are people who choose to eat vegan, and that is great too."

Klobuchar shifted to say there are ways "to make farmers part of the solution" on climate change. Farmers are struggling financially, she said, noting she was the only candidate that night who is also on the U.S. Agriculture Committee. (Sen. Michael Bennet of Colorado is also on the Ag Committee, but he did not participate in the CNN event.) Klobuchar dove into the USDA conservation programs, rattling off the acronyms CRP, CSP and EQIP. "You don't want to know what they stand for, but they are good for conservation," Klobuchar said. "The thing we are doing now that is really exciting for climate is putting incentives out there for farmers for their land and for things that will reduce CO2 in the atmosphere."

Klobuchar talked about cover crops and planting trees. She said she would do more with the tools in the farm bill to work with farmers to use farming methods that require less water, "and yet still be able to produce our own food supply so we don't have to be dependent on other countries that do not have the same environmental standards that we do."

CNN's Erin Burnett then suggested, falsely, "If everyone stopped eating red meat or went vegan, this problem would go away. Now, obviously that's not where we are going." Burnett then asked Klobuchar if she would adjust dietary guidelines. Klobuchar responded, "I would do what the science tells us," she said. "We all know there is an issue with obesity in this country and we have to do more. I'm a huge supporter of putting calorie information on menus."

Later in the evening, Amanda Freund, who works on her family's dairy farm in East Canaan, Connecticut, told South Bend, Indiana, Mayor Pete Buttigieg the farm is facing unprecedented weather and economic challenges. She asked Buttigieg what he could do "to bring stability back to the ag sector" so farmers can manage the regulations that will come with combatting climate change and "stay in business."

"Uncertainty is one of the biggest enemies a farmer has, and we're adding a lot of it with climate change," Buttigieg said. "It's one of the reasons why farmers have the most to lose. But I also believe, and clearly you are pioneering this, that rural Americans can be such a huge part of the solution."

Then Buttigieg said, "To me, the quest for a net-zero emissions cattle farm is one of the most exciting things we might undertake as a country. It can be done right now, strictly speaking scientifically, but it's completely unaffordable, of course, to make it pencil out. We need to change the economics of it. And yes, that means more federal investment. It means more investment in the Department of Agriculture, in its R&D (research and development). It also means more investment in the Conservation Stewardship Program for growers to make sure we're doing the right things with soil management." He added, "There's the potential for our soil to take in as much carbon as our entire transportation sector puts out."

Buttigieg added, "In the same [way] we as a country are rightly proud of Norman Borlaug and the Green Revolution that fed a billion people, we should be just as proud as the steps we're about to take as a country with American agriculture leading the way to green, global agriculture in a different fashion. Imagine what it would mean if a net-zero emissions cattle farm were as big an achievement fighting the climate crisis as an electrical vehicle. We would be so proud of it." Buttigieg drew a strong applause.

When asked later about livestock emissions, Buttigieg said, "First of all, I am from Indiana and, second of all, I love cheeseburgers."

Former Vice President Joe Biden didn't delve into agriculture and was not asked about it. The frontrunner in the polls, Biden was mostly challenged by youth who asked how his generation could be trusted to take on the fossil fuels industry. Biden was combative in some answers.

"Everything I have done has been done to take on the polluters and those who would decimate our environment," Biden said.

Biden insisted he knows world leaders and can bring them together for solutions to climate change by focusing on science and technology. Biden added there is enormous opportunity for economic benefits with renewable energy jobs in the U.S., though he acknowledged some people will be displaced in the process.

Sen. Bernie Sanders, I-Vt., also talked about transitioning the economy. He, though, delved into where he saw changes were needed in agricultural production going forward.

"What we are saying to people that are in agriculture for example, we are saying we are going to end factory farming because that is a danger to the environment and [contributes] to climate change."

Sanders said to applause from the audience, "And there will be a transition and there will be some pain there. We're going to put money into protecting family-based agriculture where people can -- instead of having food products transported from all over the world, all over the country -- you can get their foods, as much as we can, locally. So there's going to be change."

Sen. Elizabeth Warren, D-Mass., didn't touch on agriculture, but focused on challenging Washington interests and the fossil fuels industries. "Washington is working great for giant oil companies who want to drill everywhere. It's just not working well for the rest of us with climate change bearing down on us."

Warren said the green economy is a $17 trillion market that could spur more research and development in the U.S. and more than 1 million manufacturing jobs.

"Don't sit around and tell me what's not possible. Tell me what's going to happen if we don't do something about climate change," Warren said.

Former Texas Rep. Beto O'Rourke said a next generation farm bill would pay farmers for environmental services they want to provide, such as planting cover crops and keeping more land under conservation, and allow them to use regenerative agriculture in ranching. O'Rourke also said every sector of the economy should have a price on carbon through a cap-and-trade-plan.

"And those farmers and producers and growers are right there. They want to lead the way. They just need a government that reflects that," O'Rourke said.

A questioner who grew up in Brazil asked O'Rourke about Amazon fires, saying a big driver for deforestation "comes from U.S. investors in the Brazilian meat industry." She wanted to know how O'Rourke would use trade leverage to encourage Brazil to end Amazon deforestation.

O'Rourke said investment in Brazilian agriculture, "is one of the pernicious outcomes of Donald Trump's trade policies -- the trade war with China -- that not only closed markets that farmers in Iowa and across this country have worked their entire lives to open up, it's not only put them in debt at a time of declining farm income, its provided incentives for people to burn down the Amazon rain forest so they can plant soybeans to sell into China," O'Rourke said. "Because China right now is looking for new sellers, new producers of those soybeans they are no longer buying from the United States of America."

Sen. Cory Booker of New Jersey said he would provide incentives to agriculture with a climate stewardship plan that would include billions of dollars of investment. Booker credited Iowa with wind turbines for generating new sources of revenue, and he pointed to the potential of cover crops to pull carbon out of the atmosphere. "Family farmers will be able to have new sources of revenue by doing practices that preserve our heritage, enrich our environment, and deal with this larger crisis," Booker said.

Addressing his own vegan diet, Booker insisted he does not want to take away hamburgers. Yet, he insisted factory farms under his administration would not have tax breaks "in which corporations are treating farmers like "sharecroppers." He said his administration would champion healthy foods. "We're going to make sure the government doesn't subsidize things that make us sick and hurt our environment," Booker said. 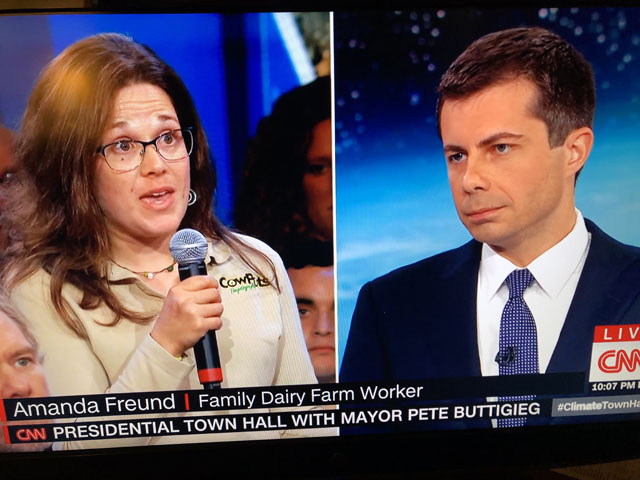