OMAHA (DTN) -- When the co-owner of a Minnesota pet food manufacturer got a brief chance to speak to Agriculture Secretary Sonny Perdue and Minnesota members of Congress at a farm show earlier this month, she told them the Food and Drug Administration is damaging both pet-food companies and pulse crop farmers.

"The FDA has just put a knife in the back of the pulse industry," said Sarah Barrett, whose family operates Barrett Petfood Innovations in Brainerd, Minnesota. The company manufactures about 65 million pounds of pet food annually and mostly uses peas, chickpea (garbanzo) beans and other pulses.

Pulse crop farmers are coping with trade and tariffs like other farmers, but pulse crop producers and some pet food companies are also losing business because FDA is arguing it's possible pulse crops in dog food are causing at least some dogs to have enlarged heart problems.

FDA has been looking for more than a year into dogs with dilated cardiomyopathy (DCM), which is effectively an enlarged heart disease. In late June, FDA issued a warning to consumers and released a detailed report of 560 cases of DCM in goods from last December through April, and the dog foods associated with those cases. FDA noted a high volume of cases in dogs that weren't typically genetically disposed to DCM, including golden retrievers and retriever mixes. FDA then highlighted 16 dog-food brands associated with most of the cases reported to the agency. The overwhelming volume of cases involved pet foods containing peas, lentils, chickpeas, beans and potatoes. Most of these pet foods are considered "grain free" in that they do not contain corn, soy, wheat, rice or barley.

FDA stated they were continuing to investigate and working with veterinarians and the pet food industry.

People in the pulse crop industry, though, say FDA has overstepped its bounds in drawing a direct link to specific pet food ingredients in a sample size of 560 cases of enlarged hearts out of a dog population of roughly 77 million.

Barrett's company blends pet food formulas for other pet food producers. She noted tens of millions of dogs right now are eating grain-free diets. Pet food overall uses between 10% and 20% of U.S. peas, lentils and chickpeas. The volume has grown over the years as more pet food brands have developed higher-end "grain free" pet food varieties that lean more heavily on pulse crops. That market has taken off in recent years.

From 2007 to 2017, the growth of grain-free pet foods soared from about 15% of the market to 44%, a 2018 New York Times article cited. The growth of those feedstuffs sparked more concerns about the food, and levels of taurine, an amino acid dogs need for healthy hearts, though enlarged hearts are often related to other diseases as well.

"There are more dogs diagnosed every day with cancer and we're not associating that to any sort of food," Barrett said.

Pulses, though, have been in pet food formulations going back more than 30 years, said Tim McGreevy, CEO of the USA Dry Pea & Lentil Council. We've been feeding pulse crops to pets for a long time and feeding them well," McGreevy said. "What's been disappointing about these announcements is they have highlighted the ingredients and put that front and center in their announcement, specifically peas, lentils and other legume seeds, as well as potatoes. We feel this a very unfair characterization."

The bulk of pulse crops going into pet food are dried peas, but the volume of lentils and chickpeas going into higher-end pet foods has been growing as well. The pet food market now accounts for about 10% of pulse crop sales, and has steadily increased over time. "It's been a growing market for us really for about the past 10 years," McGreevy said. "The pet food market has been a significant opportunity for our crops. We haven't lost it yet, but certainly if we can't get this straightened out, it's going to have an impact on pulse-crop producers if we can't turn this around."

The announcements state FDA hasn't drawn any conclusion on what is causing this DCM. The headline in June notes a "potential link between certain diets" and DCM. Still, the agency called out the pulses, other legumes and potatoes. "In the consumer's mind, it looks like pulses are the problem, but in fact, they don't know the cause and the cause is very complex," McGreevy said.

Eastern Montana farmer Chris Westergard, president of the Northern Pulse Growers Association, said he has spoken with most processors in Montana and North Dakota, the two largest states for most pulse crops. Westergard said processors are attributing a decline in sales to the FDA's actions.

"They (processors) all said the slowdown is directly related to that issue and that obviously affects the prices we get on the farm," Westergard said. "They are not trending up, I can tell you that. It's kind of an odd deal that FDA is doing this. It's a pretty good chunk of our market that is starting to disappear, so hopefully something changes."

Barrett also pointed out Canada gets roughly half its dog food from U.S. suppliers. Yet, regulators in Canada and the European Union, another large market, are not taking actions similar to FDA so far.

"The U.S. supplies Canada, I think, with about half of its dog foods, and those are the exact same formulas being fed in the U.S., no different," Barrett said. "This magically isn't a problem anywhere else in the world."

"We've basically been shut out of the market because we have an additional tariff on top of the original tariffs," McGreevy said.

Green pea prices are running $8.33 to $8.75 per cwt, depending on variety and location. Lentils are running $12 to $13 per cwt in Montana and North Dakota, down more than half since 2017. Chickpea producers had a bumper crop in 2018 that brought down prices dramatically but are selling at a range from $13 to $20 per cwt.

In July, one of the Northern Plains larger pulse crop processors, JM Grain Inc., filed Chapter 11 bankruptcy. AgWeek cited the company's sales had fallen from an average of $13 million down to roughly $3.5 million. The company cited tariffs from India, China and the European Union as "effectively shutting down those markets."

A positive for pulse crops right now is coming somewhat from the new rage of plant-based proteins such as Beyond Meat products. While some of these meat alternatives rely heavily on soy, others use pea concentrates and fava beans. At a pulse crop industry meeting this week in Montreal, Canada, one slide posted on social media showed a 500% increase in product launches containing pulse crops over the past decade.

McGreevy said product innovation is beginning to take off in pulse crops and other dry beans.

"We're ending up in just all kinds of food stuffs," he said." The product innovations that are happening with pulse crops right now are just phenomenal. There is a movement happening not just in the United States but around the world towards more plant-based options in the diet and blends of plant-based foods and animal proteins." 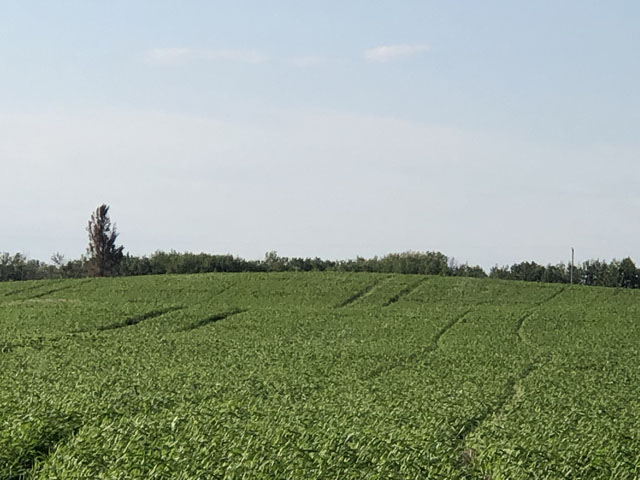