OMAHA (DTN) -- USDA officials said Thursday the Trump administration's new $16 billion trade-aid package will not distort planting decisions, but farmers will have to plant a crop this spring to be eligible for payments.

The aid package reflects the Trump administration expects the trade war with China could continue for a lengthy period of time.

"The package we are announcing today ensures that farmers will not bear the brunt of those trade practices by China or any other nations," Agriculture Secretary Sonny Perdue said.

With Perdue on one side and American Farm Bureau President Zippy Duvall on the other, President Donald Trump held an afternoon press event at the White House with farmers to announce the aid and reiterate that he has farmers' backs. The president also said farmers strongly support him.

President Trump reiterated, falsely, that farmers have seen a 20-year steady decline of income, despite farm income peaking in 2013. As a key part of the president's rural base, Trump reiterated, "They [farmers] are patriots. They stood up and they were with me. They didn't say 'Oh we shouldn't do this because we're going to have a bad year. They have had 20 bad years if you really look."

The president also cited the trade challenges with China, including the overall U.S. trade deficit, transfer of technology and loss of manufacturing jobs. He did not highlight that, as recently as 2017, China was the top agricultural export destination at $23 billion.

The $16 billion in aid to farmers, the president said, "all comes from China," due to the tariffs placed on Chinese products. He said the U.S. plans to take in hundreds of billions in tariffs from China.

"But the $16 billion will keep our cherished farms thriving and make clear that no country has veto over America's economic and national security," Trump said.

The president later used the press event to champion the U.S.-Mexico-Canada Agreement, and he called out House Speaker Nancy Pelosi, D-Calif., as the reason his administration has not sent the trade deal to Congress. "I don't think she's capable of understanding it. I think she's got a lot of problems."

USDA earlier provided details of another year of Market Facilitation Program of up to $14.5 billion in direct payments to farmers. The payments, though, will be structured differently from the MFP payments farmers have received over the past nine months. Under the new program, as a way to avoid planting distortions, USDA will pay crop farmers "based on a single county payment rate multiplied by a farm's total planted acres in 2019."

The county rate will be based on the total volume of crops planted in a county that were affected by trade retaliation tariffs from China, the European Union and Turkey. Those county rates, which will vary in every county, were not released Thursday.

Payments will be broken down into three tranches this time. The first set of payments could go out as early as July or August after farmers have provided Farm Service Agency with their crop-reporting data, which is due July 15.

The new MFP payments will be capped at the total amount of eligible acreage a farmer planted in 2018. While USDA officials said the new program was done to avoid distorting spring planting decisions, the new MFP will push farmers to avoid prevented planting. Further, farmers facing disasters who cannot plant won't be eligible under the program.

"You will not receive payments if you do not plant," said Rob Johansson, USDA's chief economist.

Based on the last USDA NASS Crop Progress report, more than 47 million acres of corn and roughly 67 million acres of soybeans still needed planting. Both crops are way behind their normal planted acres by this time in the spring.

Perdue praised the president for pushing to get the payments to farmers.

USDA officials said using the county-based formula would avoid farmers planting crops this spring specifically for the payments to a specific commodity.

"The goal, obviously, from our perspective is the goal is we want producers around America to produce the way they would without any government program," Perdue said. "We don't want them to skew planting intentions or any other types of policies that we would do. We want them to act this spring just like they would have acted without any program."

Perdue also characterized the trade-aid payments as coming from tariff revenue, though USDA will be using its authority under the Commodity Credit Corporation to pay farmers. Perdue said CCC will be replenished from Treasury funds, which also is where tariff payments are going.

"While legally you can't direct tariff payments into agriculture, that's what the president feels like China is paying for this program for our ag supporters and our ag producers out of tariff revenue that we are getting from the tariffs on China," Perdue said.

Perdue also added that the Trump administration could continue to provide payments to farmers as long as the trade dispute with China continues. "That depends on China," Perdue said. "We would love China to come to the table at any time."

The plan also includes spending $1.4 billion under a food purchase and distribution program, similar to the program that has spent $703 million under last year's setup. The program is used for buying fruits, vegetables, some processed foods, beef, pork, poultry and dairy products that will be distributed by USDA to food banks nationally.

USDA also will set aside another $100 million dedicated to developing and growing more export markets for farm products. USDA just recently announced $200 million for checkoff programs and other groups that will go specifically for expanding export markets by these organizations. 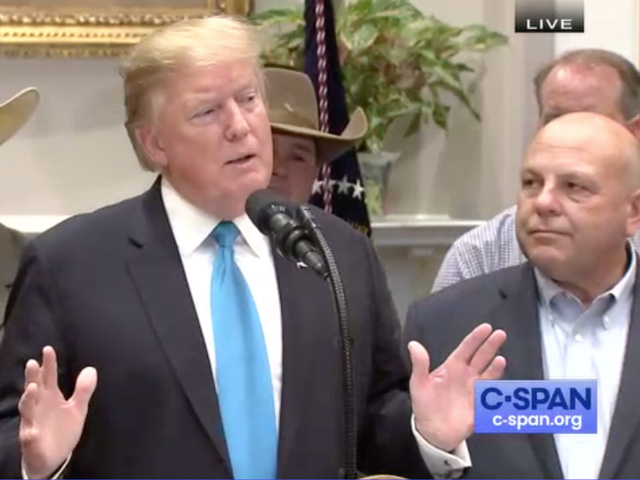