Greg Ibach, undersecretary of marketing and regulatory programs for USDA, told lawmakers USDA has stepped up biosecurity and import control efforts for African swine fever. But Ibach also emphasized ASF is a difficult disease to control once it arrives.

African swine fever has hit hard in China, which has the world's largest swine herd. The disease does not affect people and it is not a food-safety concern. However, the disease infects both domestic and wild hogs and can be transmitted by feed or other contaminated objects because ASF has a high environmental tolerance.

In China, the disease has wiped out roughly 20% of the pork herd. U.S. Meat Export Federation officials said Tuesday they are seeing little impact in major Chinese cities, but the global food trade expects China will eventually have significantly lower pork supplies.

U.S. hog prices have gone up this spring, but futures prices have come down $7 to $10 per cwt for most contracts since mid-April.

In Washington on Tuesday, House Agriculture Committee Chairman Collin Peterson, D-Minn., said livestock producers learned their lessons from the highly pathogenic avian influenza outbreak in 2015. That was one reason he supported mandatory funding for USDA to improve its disease preparedness.

"In my district, hog producers are very worried about this African swine fever," Peterson said. He asked Ibach what is being done to control ASF once it gets into the country, and how to stop the virus from moving from herd to herd. "God forbid this ever ends up in the United States."

Ibach said it could take up to eight years to find a vaccine that would work on ASF. Dr. Burke Healey, associate deputy administrator for Veterinary Services at USDA's Animal and Plant Health Inspection Service, also testified with Ibach. Healey said there are more than 20 different types of ASF.

"African swine fever has proven to be a tough disease to find a cure for or a vaccine for," Ibach said.

Ibach said it has even been difficult to understand how to clean up and decontaminate a farm once ASF shows up.

The avian influenza outbreak also showed biosecurity measures in the poultry industry were not as strong as believed. Highly pathogenic avian influenza swept through egg-layer and turkey barns in 2015, causing significant damage, especially in Iowa and Minnesota.

If ASF arrives in the U.S., it could possibly be curbed, but the impacts would be felt in a variety of ways, including export bans.

"Our economy would feel it if we had a widespread disease in the U.S.," Ibach said.

Lawmakers also questioned imported feed, notably imported organic feed from China. Rep. Mike Conaway, R-Texas, asked if that feed could be irradiated. Ibach said organic soybeans have been an issue, but there has been a downturn in the amount of organic feed coming from China recently. Ibach said he had discussions with pork industry leaders pointing to 17 areas of concern over African swine fever, and imported feed was one of those issues.

"As we look at trying to address the concerns of feed, we don't have the same science to analyze the risk there that we have in some of the other vectors we are seeking to control," Ibach said.

"At this time, in agreement with the swine industry, we haven't taken any additional steps," Ibach said.

In the 2018 farm bill, Congress also created a national animal disease preparedness and response program and vaccine bank to help stop or reduce the impact of a major animal disease outbreak. So far, USDA is working to spend $5 million on preparedness programs by the end of the year. Ibach said USDA is still meeting with livestock industry groups about a vaccine bank, but could put out a request for proposals by the end of the year.

Rep. Jim Costa, D-Calif., chairman of the subcommittee that held the hearing, said he was concerned about the "vagueness" of USDA's timelines on the preparedness program and vaccine bank. Costa also said the president's budget did not propose funds for either program.

While Congress and USDA focus on the implications of an African swine fever outbreak in the U.S., staff from the U.S. Meat Export Federation discussed the uncertainty of the export market in China and the "eerie calm" about pork supplies in China. A recent food-trade event in China was filled with questions about ASF and its effects on the China market, said Joel Haggard, senior vice president for the USMEF in Asia Pacific.

"It's a strange situation being in China, because if you are in Shanghai or Beijing, there's an eerie calm about the supply situation," Haggard said on a call with reporters.

Supermarkets are still holding pork specials and pork is in meat cases. Retail prices also have not spiked, Haggard said.

Still, official numbers put out by the Ministry of Agricultural and Rural Affairs in April showed the national sow herd is down 22% from a year ago and total inventories were down 21%.

"Everyone is asking, 'OK, when is this going to manifest itself with big imports and much higher prices within the country?' -- some of the visual manifestations of product shortages," Haggard said.

USMEF, using USDA data, cited Tuesday that U.S. pork exports to China and Hong Kong were $56.35 million for the first quarter of 2019, down 34% from a year ago. USMEF attributed the decline to tariffs placed on U.S. pork. 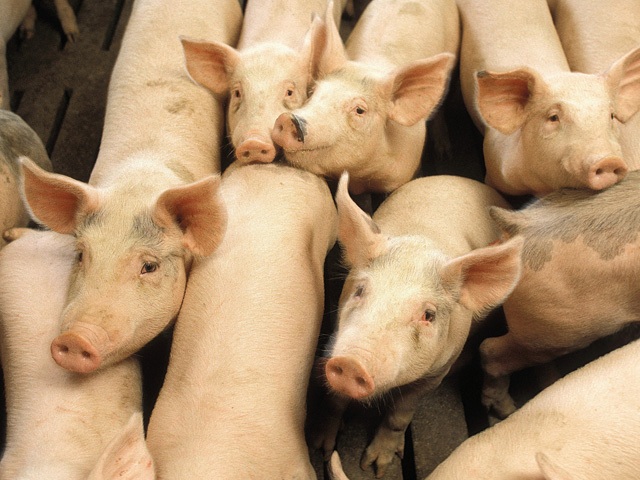