The wheat tour's final estimate is an average of three days of wheat yield estimates produced by crop scouts who scouted and measured wheat throughout Kansas as well as southern Nebraska and northern Oklahoma. On the first day, crop scouts produced a yield estimate of 46.9 bpa, on the second day 47.6 bpa, and on the third, 46.2 bpa.

Overall, the 74 participants on this year's HRW wheat tour visited 469 fields. Muddy boots and wet pants quickly became routine, as scouts encountered unusually ample soil moisture in many parts of the state, although dryness has crept into some southwestern counties.

Tour organizers and wheat industry leaders stressed that the yield and production estimates should be viewed as a useful snapshot of the crop's potential at this particular moment -- but much could change between now and harvest.

"It gives an assessment of the crop at this point in time," said Aaron Harries, vice president of research and operations for Kansas Wheat. "It's the potential. If all things were to remain equal, this is what the number may be at the end of harvest. The problem is that, between now and then, we could have floods, rains, drought, hail, wind, disease, pests, and that wheat crop could have a lot to go up against."

Nearly half the crop is already battling the consequences of late planting: Many fields are short and running weeks behind normal development. One farmer in Marion County told scouts his fields weren't planted until Nov. 1 -- and they got 4 inches of snow a week later. His wheat field wasn't at flag leaf yet this week, when it would normally be in boot stage or heading at this time of the year.

Low prices have discouraged many growers from investing in these late-planted fields. In the south-central counties of the state, crop scouts viewed some fields that had been sprayed out with glyphosate, in order to plant to a different crop. Winter wheat acres, pegged at 7 million planted acres by USDA, could drop significantly before harvest.

There is reason to remain optimistic, however. The spring has provided plentiful moisture and moderate temperatures so far, and if that trend continues -- as forecasts suggest it will -- it could benefit grainfill.

"Winter wheat is a cool season grass," Harries noted. "We have our biggest yields in Kansas when it stays nice and moderately cool in May and we have good rainfall, because that encourages the plant to produce more starch, which increases the yield."

These conditions do appear to be on the menu for the Southern Plains in the coming month, but the serving might be larger than desired, noted DTN Senior Ag Meteorologist Bryce Anderson.

"I think the weather pattern over the next couple weeks is going to be less than ideal for the Southern Plains wheat crop," Anderson said. "The forecast is cool and wet, with below-normal temperatures and above-normal precipitation. I don't look for heat-related stress on the heading crop, but these conditions will keep the environment favorable for fungus and rust development that could affect the final yield prospects."

Disease is one of the biggest remaining wild cards for the crop, particularly for the late-planted fields, where producers may not be inclined to invest any more inputs.

"Diseases will often build up to higher levels on that late-maturing wheat," said Erick DeWolf, Kansas State Extension plant pathologist. "The amount of yield loss that occurs to the crop is also related to the time the disease begins damage. The earlier it gets established, particularly on the upper leaves, the greater the yield loss."

"The weather conditions we experience in the next couple weeks will really influence the amount of disease -- and yield loss from it," DeWolf added.

Beyond the final yield and production numbers, the HRW Wheat Tour and its summer counterpart, the Hard Spring Wheat and Durum Tour, serve another purpose: to bring together the various arms of the grain industry, said Dave Green, executive vice president of the Wheat Quality Council and tour organizer.

You can reach Emily Unglesbee at Emily.unglesbee@dtn.com 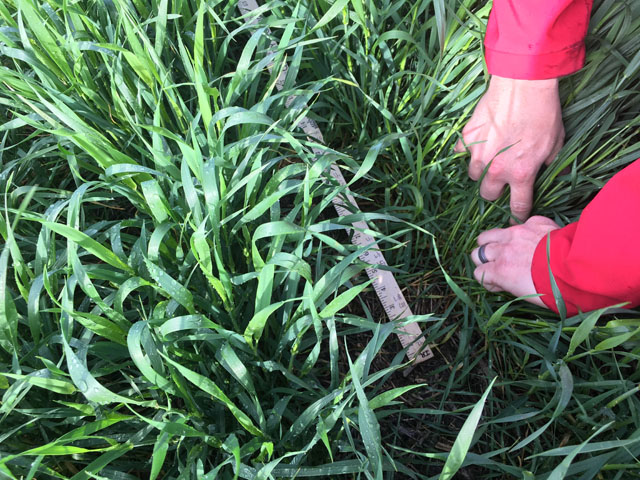