ROCKVILLE, Md. (DTN) -- It's become one of the surest signs that spring is underway -- for three days, dozens of people crouch in Kansas wheat fields, in rain or shine, with a ruler and a pen, measuring wheat stands across the state.

The Wheat Quality Council's annual Hard Red Winter Wheat tour will hit the road this week to scout fields and give the industry an idea of what kind of wheat crop to expect when the combines roll this summer.

This year, scouts may get a break from two years of extreme weather conditions in the Southern Great Plains.

"Two years ago, we were scouting wheat in the snow, and last year, it was very dry and I was very pessimistic about the crop," recalled Dave Green, executive president of the Wheat Quality Council and tour organizer.

After a rough start in the fall of 2018, much of the winter wheat crop appears to be in pretty good shape this spring.

"A lot of the crop didn't get in on time, and that triggers a whole set of worries about emergence and freezes," Green noted. "But we're finding that the wheat does look really good. It is late, but it is tillering and setting stands, and I suspect we're going to see pretty good wheat."

USDA's weekly Crop Progress report concurs. As of Monday, April 22, the winter wheat crop was running behind average pace, at just 9% headed, but 62% was rated in good-to-excellent condition, up from just 31% last year at this time. The state's moisture levels are also high, with 82% of topsoil moisture and 86% of subsoil moisture estimated at adequate levels.

Yet, as healthy as the crop may prove to be, any final production numbers will be constrained by the historically low winter wheat acres planted last fall -- the result of depressed prices and shrinking profit margins for growers.

"USDA is estimating 31.5 million acres of winter wheat plantings in 2019, the lowest in over a hundred years," DTN Lead Analyst Todd Hultman noted. "With U.S. ending wheat supplies near their highest level since the 1980s and exports struggling to compete around the world, Kansas City wheat is trading near its lowest prices in 13 years, a difficult environment for U.S. producers."

Jeanne Falk Jones, a Kansas State University Extension agronomist in northwest Kansas, was a little worried about some fields in that region this winter. But with plentiful moisture, wheat there is earning its reputation for scrappy resilience, she noted.

"A lot of wheat seems to have filled in -- the smallest tillers have gotten some growth on them," she told DTN. "It has gotten regular moisture, and even the smallest wheat has come along. In general, our wheat in northwest Kansas looks really good."

Some freeze damage is possible, given a statewide plunge in temperatures on April 11, but Falk Jones has mostly noted only mild leaf burn in her corner of the state. Winterkill was not significant, either, she noted. "There were a few spots of cold conditions this winter, but for the most part, we had good snow cover on the wheat."

Scouts may encounter some wheat disease, however. After two years of significant wheat streak mosaic virus outbreaks in the state, the disease is a potential threat again this year. The disease is spread by wheat curl mites, which survive and spread on volunteer wheat.

Growers in northwest Kansas who experienced hail damage in the summer of 2018 saw a lot of volunteer wheat come up last year, and the disease is present in the region, Falk Jones said.

"The monitoring efforts for rust have really picked up after last week's report of both leaf rust and stripe rust in south-central Kansas," he wrote. "This morning there were several more reports of rust for the south-central region of the state, including Edwards, Ford, Gray, Finney, and Hodgeman counties. So far, it appears to be leaf rust that is most active, but stripe rust is also present."

In contrast, insect pressure appears to be low across the state so far, Falk Jones and Green both noted.

"We have six different routes we take every year," he explained. "Cars stop at random fields based on the odometer -- roughly every 10 to 15 miles. Each car makes 12 to 15 stops a day, and then we tally our routes and calculate an average yield estimate for the route versus last year and versus long-term averages."

On Monday evening, scouts gather in Manhattan, Kansas, and are trained to measure wheat yield potential and scout for disease, insects and freeze damage. On Tuesday, they explore northwest and north-central Kansas, with one route hitting Nebraska's southernmost counties, before landing in Colby for the night.

On Wednesday, scouts fan out through southwestern and south-central Kansas, with one route dipping into northern Oklahoma, before ending the day in Wichita. Finally, on Thursday, scouts explore southeastern Kansas, before heading back to Manhattan and revealing the tour's final statewide yield estimates.

Several media outlets also participate in the tour. DTN will post an evening story with the day's yield estimates and observations on Tuesday, April 30, and Wednesday, May 1, as well as a final story on the tour's statewide yield and production estimates on Thursday afternoon, May 2.

She can be reached at Emily.unglesbee@dtn.com 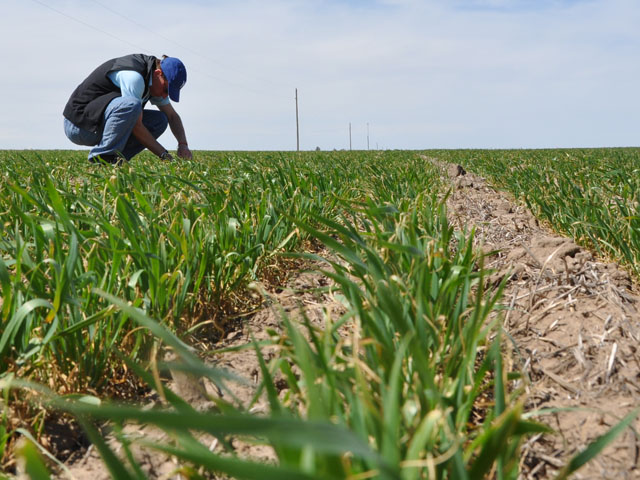