Ceteris paribus: It's a Latin phrase often used (and overused) by economists. It means "all other things being equal." Of course, it's never actually possible to hold all other things equal, but we say it anyway.

For instance, maybe we want to examine how shifts in Brazil's currency, the real, affect the prices of the soybeans they are selling on the international market, where the financial settlement might ultimately be converted into U.S. dollars. Soybeans at the port in Brazil, ready to be shipped, are currently priced at the equivalent of about $9 USD per bushel (about $333 USD per metric ton or 1,300 reais per metric ton). The Brazilian currency is worth $0.25530 USD per real.

Consider how the soybean price tag in U.S. dollars might change if the real suddenly weakened further. Let's say it goes to $0.25000 (a big drop, but not out of the question given the downside volatility in this market lately). Then, "ceteris paribus," maybe we would expect those same soybeans to slash their price tag from $9.06 USD per bushel to $8.87 per bushel.

It makes sense if you think about the inverse of the exchange rate. When the real is worth $0.25530 USD, it requires 3.92 reais (1 divided by 0.25530) to buy one U.S. dollar. When the real drops to $0.25000 USD, it would take 4.00 reais to buy one U.S. dollar. Therefore, when soybean sellers receive U.S. dollars for shipments of exported soybeans, they receive relatively more reais for those shipments when the real is weaker. With a weak domestic currency, the international soybean-dollar is worth a bigger number of that local currency.

The Brazilian real (BRL) has been historically weak for several years and has displayed several volatile downward movements through the last half of March 2019. It's still bouncing along within 10% of its September 2015 low at $0.23455. Perhaps, if we could hold all other things equal, those movements in the Brazilian currency alone could explain recent losses in the benchmark Chicago soybean futures contract. As a test case, let's look at the 4% drop in Brazilian reais between March 20 and March 28:

By this reckoning, soybean futures at the Chicago Mercantile Exchange only dropped about 40% as much as they "should" have dropped, ceteris paribus, during that timeframe. That's assuming they should shift up or down to match the gyrations of the Brazilian currency. To keep the equivalent soybean price steady at 33.93 reais per bushel, the price in dollars would have had to drop not just the 16 cents it did drop, but a full 40 cents to $8.67 per bushel.

Clearly, there was (and is) more going on in the soybean market on any given day than just the movement of the Brazilian real. That's the danger of any analysis of only one of the hundreds or thousands of dynamic variables that go into a commodity market. It's impossible to ever keep "all other things equal." At the same time that the Brazilian real was weakening, local logistics were affecting cash basis prices, North American planting season was approaching, weather was happening across the globe, the Chinese yuan was shifting in value, the U.S. dollar itself was shifting in value, total open interest was growing in soybean futures, etc.

Yet, in the short term (the last four months or so), this day-to-day relationship of soybean prices and the Brazilian real has been pretty dependable. The long-run correlation between these two assets is meaningless, but in this particular time period when Brazil is the dominant world exporter (and price leader) of soybeans, its currency has also been the dominant indicator of the direction that benchmark global soybean futures prices will take. On any given day, the direction of the Brazilian real has been a reliable explanation for almost every question I've had about soybeans, like "Why did the price suddenly tank today for no reason? Oh, let's look at the Brazilian real."

Unsurprisingly, the Brazilian real has also been a huge driver of coffee futures prices. Brazil is far and away the world's largest producer and exporter of coffee, responsible for about one-third of the global crop. Its catbird seat selling non-tariffed soybeans in 2019 is a position the country is already accustomed to in the Arabica coffee market. Their bumper crop and record-breaking exports in 2018 (followed by a 2019 crop that is also expected to be surprisingly good), together with the weak real, has depressed the global coffee market into low prices not seen since 2005. Those prices are below the cost of production for coffee farmers from Central American and other South American countries that don't receive payment in Brazilian reais.

What drives the Brazilian real from day to day? As for all currencies, it's the outlook for the country's fiscal health. Headlines about the Brazilian government's willingness to take on pension reform tend to drive the daily price swings in the real -- a topic that has virtually nothing to do with the supply and demand of soybeans, but affects their global price nevertheless.

The current day-to-day relationship between soybean prices and Brazilian real prices could easily break and go back to low or zero correlation if the soybean market starts to express other unrelated supply and demand factors. In the meantime, it's one good explanation for recent price movements.

Unfortunately, this indicator explains almost nothing about Tuesday's (April 23) 15-cent drop in soybean futures. The Brazilian real actually strengthened on that trading day and looks set to strengthen further.

So, we continue to search for explanations. 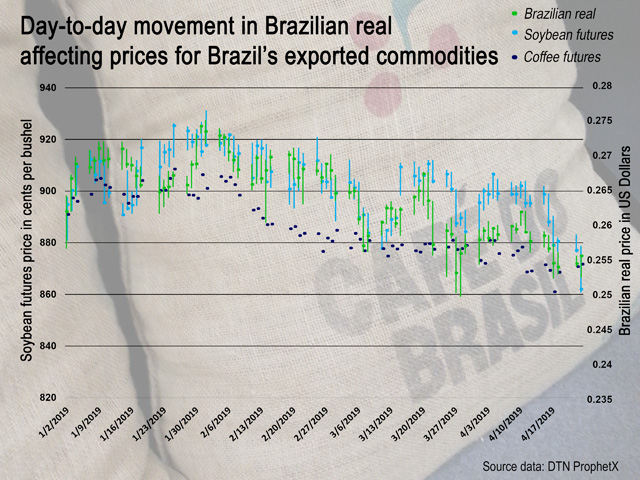