OMAHA (DTN) -- The big fight in the Nebraska Legislature this year is over plans to reduce property taxes, which has the state's farm lobbies pushing lawmakers hard for some relief.

Numbers taken from the 2017 Ag Census show Nebraska farmers have more reason to complain about property taxes than farmers in nearby states.

Farm income nationally fell between 2012 and 2017, and land values fell in some states during that time. Property taxes nationally for farmers went up $2 billion over that five-year stretch, jumping from $7.4 billion to $9.4 billion. The average property-tax increase nationally was $21.3%. Just one state, Rhode Island, collected less in property tax from farmers and ranchers over that five-year stretch, according to the Census figures.

Property taxes paid by farmers are listed among farm production expenses on a major initial data set for the 2017 Ag Census, which USDA released last week.

Nebraska policymakers want to reduce property taxes, but Gov. Pete Ricketts has pushed back against efforts by the nonpartisan unicameral Legislature to offset property-tax cuts with higher sales taxes or other tax hikes. Ricketts has aggressively held public events with various businesses that could be forced to tax their products or services. Farm groups, though, are part of a coalition seeking property-tax relief.

More than 91% of Nebraska's agricultural property taxes, about $625.7 million, were paid by just under 40% of the state's larger farm and ranch operations. Those farms each reported paying more than $10,000 in property-tax expenses. The state-level data for each state breaks down farm expenses, including property taxes, into a range of reported levels.

Kansas farmers saw their property taxes increase 29.7% during that time -- the third-highest jump in percentage -- as they paid an average of $5,831 in property taxes.

Ohio farmers paid $411.7 million, which comes out to an average of $5,518 per farm. But Ohio farmers saw the largest increase in property taxes by percentage over the five years of the Ag Census. Property taxes for the 74,609 Buckeye farmers rose nearly 43% from 2012. 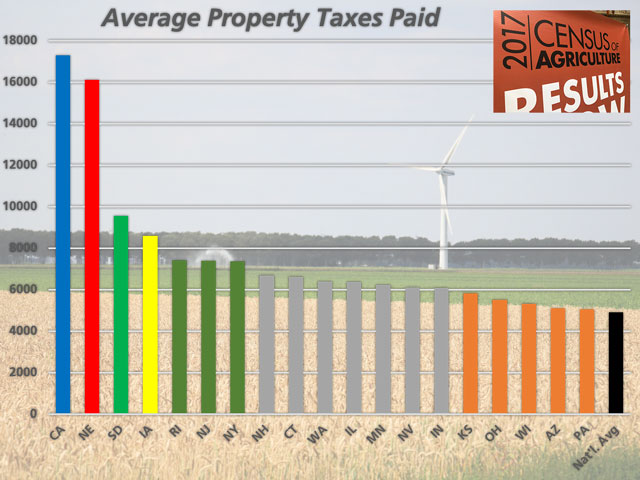