SIDNEY, Iowa (DTN) -- A small group of farmers on Tuesday looked out at what is normally their farm ground and the now-destroyed bins that normally protect their income. What they see instead is a shallow lake formed by snowmelt and rain that has pushed the Missouri River far beyond its banks and temporarily reclaimed their river-bottom land and put their farms at risk.

The same scene is playing out for farmers in Nebraska, South Dakota and northwest Missouri right now. While the losses are devastating locally, they aren't necessarily driving up crop prices. Fremont County, Iowa, has some 50,000 acres underwater, and local farmers estimated roughly 390,000 bushels of soybeans and 1.3 million bushels of corn are in bins, many of which are destroyed or damaged. The grain is valued at roughly $7.3 million.

"The biggest situation we have with those farmers is grain in bins that is compromised," said Jeff Jorgenson, who farms about 750 acres along the river bottoms. "That's the real problem we have. It has got to be addressed or there's the potential to end their farming careers. They are looking at not just one, but two, and maybe three years of lost income."

USDA has indemnity programs for livestock, but due to changes in the farm bill over the past two cycles, there's no specific disaster aid program for lost grain. Right now, they would be relying on low-interest loans. The destruction, though, has helped advance a disaster bill in Congress that was already set to deal with multiple disasters from 2018, including two hurricanes in the Southeast, wildfires in California and continuing aid to Puerto Rico. The Senate is expected this week to pass a $13.45 billion disaster bill. Sen Charles Grassley, R-Iowa, told reporters Tuesday the bill should help cover some losses for farmers who were caught by the floods with corn and soybeans in grain bins.

Bill Northey, USDA's undersecretary for Farm Production and Conservation, is expected to tour some of the disaster-stricken counties in Iowa later this week along with Grassley and state officials.

Because Jorgenson was along a hard-surface road closer to the hills than the river, he was able to get his grain out and moved before the flooding hit. Some people have lamented why others couldn't get their grain out, but the weather conditions in the weeks leading up to the flooding just didn't allow for easy movement of grain. Up until roughly March 10, everything was frozen, and the temperatures and winds were harsh.

"We came off a harsh winter with icy, gravel roads, and you just couldn't get the grain out a lot of times," said Jorgenson, a board member for the Iowa Soybean Association. "So you hope it is not going to get this bad and all of a sudden it does. We are just very vulnerable for something bad and we got the worst scenario."

Most of the grain in the bins has a foot of snow and ice around the bins. The grain was either contracted for delivery later this spring or unsold as farmers waited for a rally. Some of the grain and soybeans also were under USDA or bank loans.

"We had an extended harvest. We had the harvest from hell, then the road conditions didn't allow a lot of this grain to leave the farm, because it was either icy or the frost was going down and the roads were too soft and you couldn't get to it," said Pat Sheldon, another farmer with land underwater and a board member for the local levee district.

Farmers were irked that national media have suggested, repeatedly, that one reason so much grain was in bins was President Donald Trump's tariffs on China. Higher prices might have led to more grain sold at harvest, but that had nothing to do with the flood.

"The thing that upset us with that angle was they were trying to turn it political, so they had something to throw back on the president," said Leo Ettleman, who farms near one of the breached levees. "And that's not the issue here."

Local levee managers met with Army Corps of Engineers officials Tuesday in Sidney to discuss options for stopping the river flow from coming in the breaches. The Missouri River still has to come down before they can get barges full of rock in to start patching up the levees. With more than 50 breaches along the levee system, it will be a multi-year plan to rebuild levees back to full protection levels.

"It isn't going to be a quick fix this time. We're going to be vulnerable for a few years," Sheldon said.

A tour with the farmers along parts of Interstate 29 showed debris on parts of the road such as tree limbs, barrels, propane and farm gas tanks, but I-29 remained intact. Off the interstate, the water had receded off some fields farthest from the river, but extensively flooded grounds still remained. The flood had gouged out bedding all along a railroad, and water looking like rapids continuing to pour over county and state highways, undermining them in the process. Towns, farms and businesses remain underwater. The water will continue to flow until the river goes down and the levees can be plugged.

In 2011, farmers in southern Iowa and Missouri basically had about three weeks that spring to get stored grain and livestock out of the area before the levees breached. The temperatures were warmer and heavy rains started farther up the Missouri River system, so the flooding was slower to build. This time, the flooding was much quicker and there was little warning.

"We didn't get any warning," Sheldon said. "We didn't have any communication with the Corps until we were already in trouble."

At Tuesday's meeting, Fremont County officials addressed the lack of communications with Corps officials, almost all of whom are different from those in 2011.

"They could have given us two days warning even if they thought everything was going to be OK," Sheldon said. "They could have at least told us, 'Hey, we've got this coming and we're not sure how much it's going to be and you guys need to be aware of it.' But we got none of that."

One of the benefits farmers had initially recovering from the 2011 flood was that prices were strong, so crop insurance payments were higher. Farm income rose until 2013 and remained relatively strong in 2014 compared to the declines in commodity prices and farm income since then. Now, farmers are dealing with nearly five years of low prices and lower overall income. Working capital has been eroded over that time.

Lower prices, lost grain and the production hits to the river bottoms will translate into lower prevented planting payments under crop insurance as well.

"So this is a little bit tougher deal when we just don't have those dollars flowing in, especially with all those compromised grain bins," Jorgenson said. "This is going to be catastrophic."

Farmers in 2011 also had the Supplemental Revenue (SURE) Assistance Program, which was part of the 2008 farm bill, but Congress eliminated the program in 2014.

"We're at a point now where low-interest loans aren't the answer," Sheldon said. "We need some of the disaster programs to come back."

After the 2011 flood, it took a year to 18 months for most farmers to move the sand and sediment off their ground, and in some cases, they farmed around piles of sand that remain today. Those piles were again flooded and washed back out onto fields. Farmers said recovery will likely take longer this time around. Not only will there be no planting for most of them in 2019, but 2020 is questionable.

Sheldon and Ettleman said they know at least one farmer in the area who has decided the damage is too much for him to continue farming.

"It's affecting two years of income or profits, because it's the 2018 crop that is out in the bins, and we have no idea what we're going to get planted or harvested in 2019," Ettleman said.

"We're still going to be at 25-year protection level on the levee in 2020, so all of this ground is going to be high risk then." 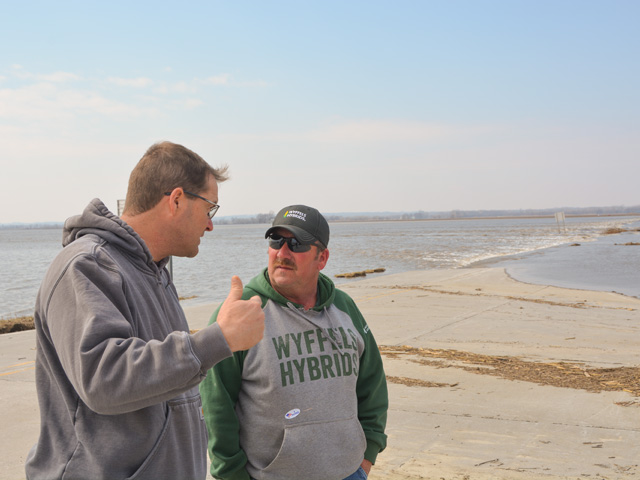