GLENWOOD, Iowa (DTN) -- Exasperated local officials told Iowa Gov. Kim Reynolds on Monday about lost farms and businesses due to flooding, ongoing river breaches, the need for higher levees and their concern about a lack of information from the U.S. Army Corps of Engineers

Flooding over the weekend in the Missouri River Basin quickly became more destructive than flooding the region faced in the spring and summer of 2011. Levees that held back the river eight years ago collapsed and were undermined by heavy water coming from multiple rivers. Levee breaches and topping continue down into northwest Missouri, as well.

Missouri River communities in southern Iowa, Nebraska and northwest Missouri are largely agricultural but contain a significant number of grain elevators, ethanol plants and farm equipment dealers that were flooded. The river topped a sandbag wall in Hamburg, Iowa, early Monday and had flooded every other Iowa river community up to Council Bluffs.

Reynolds toured multiple flooded communities Monday, including Pacific Junction, Iowa, where residents and local officials thought they were safe early in the weekend. But by Sunday evening, the entire town had to be evacuated just west of Iowa's bluffs, and the entire town was flooded Monday morning.

The Army Corps of Engineers reported at least 20 levees south of Omaha on the Missouri River were topped or breached in Nebraska, Iowa and Missouri. At least five other Corps levees in Missouri were at risk of breach or topping.

The Corps at Gavins Point Dam in South Dakota had reached 100,000 cubic feet of water releases briefly on Friday, but had dialed back the outflows to about 43,000 cfs on Sunday night. The volume of outflows were expected to continue to decline to 20,000 cfs by Tuesday morning.

Carol Vinton, chairwoman of the Mills County Board of Supervisors, told Reynolds on Monday she was frustrated there wasn't more forewarning about the possible risks of such flooding in early March. Just over a week ago, most of the region was facing freezing temperatures and standing snow that quickly turned into a flood risk.

"The thing that is really sad is that, if somebody knew this higher up and did not want to tell us, we could have had two weeks of farmers getting bushels -- millions and millions of bushels of grain out -- they could have found another storage, we could have sandbagged," Vinton said. "We could have been so much better prepared than this hell with being 48 to 72 hours, and it has just got to get better."

Larry Hurst, director of Mills County (Iowa) Emergency Management, pointed out the cascade of events from the Spencer Dam failure along the Niobrara River that pressured the Corps of Engineers to increase water releases at Gavins Point Dam on Thursday night into Friday.

Hurst added, "The ag issue is a big deal. Most of this is agriculture down here."

In 2011, heavy rains and flooding in the northern Missouri River watershed led to months of river-bottom flooding from North Dakota into Missouri. Residents and officials in Iowa, Nebraska and Missouri had more forewarning and time to react and prepare for that flood. This time around, flash floods swept through much of Nebraska and parts of South Dakota, filling dozens of tributaries rapidly into the Missouri River above and below dams. And more levees became compromised because of the swiftness of the water flow and rapid snowmelt.

County officials lamented it will be difficult to farm most of the ground that has been flooded this year. There were thousands of acres along the Missouri River that did not get harvested last fall because of wet conditions.

"A lot of this land will not be touched this year because they will not dry out," said Richard Crouch, a Mills County supervisor, adding it could take years to re-establish crops because of sand and debris that will pour in from the river.

Reynolds noted there were problems over the weekend with state officials getting information on flooding from the Corps of Engineers because of the way federal officials were sending information through the Department of Homeland Security.

"I talked to them about this on Saturday that it's just not acceptable that we can't have the communications back and forth," Reynolds said. "It's timely. We have to be able to get the information out and get the resources there, be able to issue disaster procs (proclamations) to free up additional resources to coordinate things and work together."

Mills County officials lamented lost businesses along the river, including a new truck stop and separate convenience store that both opened last year and are now both underwater. Local officials have been pressing federal officials for better levee protection, especially since a new bridge was built connecting Iowa and Nebraska that opened up five years ago. They rattled off hundreds of millions in lost equipment from various businesses, as well as farm ground.

"We're talking about millions of acres that are gone," Vinton said.

Glenwood's water-treatment plant along the river bottom was closed Monday morning because flooding forced the electrical utility to shut down power to the plant, requiring the town of about 6,000 to rely on its towers for water, at least temporarily.

"I believe the water towers in town are full and we can stretch it, hopefully," said Ron Kohn, Glenwood's mayor. "People will figure out how to get by."

Reynolds was working to get the damage details documents to submit a request to the Trump administration for a federal disaster declaration. Reynolds said she was also coordinating with Nebraska Gov. Pete Ricketts and his staff to assure a strong federal response. She said she wants Corps maintenance funding redirected to speed up federal technical work to rebuild and improve levees.

"We need significant assistance from the Corps and we need it tomorrow," Reynolds said. She later added, "We need to talk about this now as a region. We need to attack it from that perspective, and that will also help with some of the funding."

The Missouri River and several of its tributaries are expected to crest Monday or Tuesday as the Army Corps of Engineers dialed back flow releases from a South Dakota dam over the weekend and most of the most-threatened areas went without rain.

On the Nebraska side, roughly one-third of Offutt Air Force base was underwater, including about 3,000 feet of runway, the Omaha World-Herald reported.

Farther west and north in Nebraska, receding waters over the weekend revealed devastated towns, farms and homes, as well as roads and bridges destroyed by raging rivers. The storms began last week with a combination of snow, heavy rain and temperatures just warm enough to melt off months of snow in a matter of hours. Ice chunks remained in some areas, but that threat has declined. 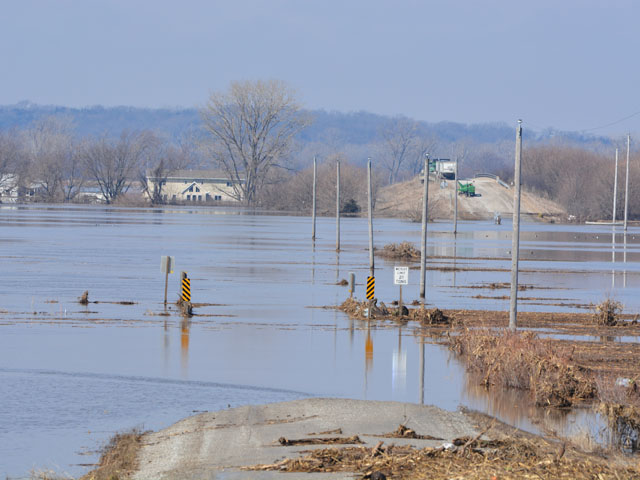