OMAHA (DTN) -- U.S. Rep. Collin Peterson, who likely will retake the chairmanship of the House Agriculture Committee, said Wednesday his top priority right now is to get a farm bill done in the upcoming lame-duck session of Congress that will start next week.

Peterson, a Democrat from Minnesota, won his 14th term Tuesday night. Peterson said he got a phone call from USDA Secretary Sonny Perdue late in the evening congratulating Peterson and encouraged him to help get a farm bill done quickly.

"That's going to be the No. 1 goal," Peterson told reporters on a conference call. "I think we're relatively close, and I think we can work this out and get this done before this Congress adjourns."

As of midday Wednesday, Democrats had retaken the House of Representatives with a 220-194 lead in seats over Republicans. There were still 26 House races nationally in which a winner had not been declared.

President Donald Trump, in a White House news conference Wednesday, was asked about the farm bill, which he said "is working really well." But the president also complained about Democrats delaying the farm bill because "Democrats are not giving us the 10 votes we need. The democrats are not approving the farm bill with work rules." Trump was pointing to contention over work requirements for people on Supplemental Nutrition Assistance Program (SNAP) aid.

Peterson said he talked with House Minority Leader Nancy Pelosi a couple of days ago, and she indicated to him that she wants to work on a bipartisan basis to get the farm bill done, as well as work on an infrastructure package and areas such as ethics reform.

Until now, current House Ag Committee Chairman Michael Conaway, R-Texas, has been dogged by tightening work requirements in SNAP. Peterson thinks that Conaway's stance may loosen a little bit. Peterson has maintained the problem is not tougher work and job training requirements for SNAP recipients, but restricting the ability of states to avoid current work requirements.

"The problem is not that we don't have work requirements, the problem is we have all of these waivers," Peterson said, noting USDA is working to tighten waiver requirements already. Peterson added, "Given what happened in this election, I don't know what leverage they think they have not resolving this."

At the moment, Peterson said he can't do anything about delays in the farm bill. Senate Agriculture Committee leaders have been more responsible for delaying the bill for their negotiating stances on SNAP and commodity programs. Still, Peterson doesn't see any way the farm bill isn't finalized in the lame-duck session.

"I get the sense they are going to work this out," he said.

The House bill shifts some base acre payments away from land that has not been planted in the past decade -- largely affecting wheat acres converted to pasture -- and uses the funds to boost payments largely to cotton acres that have been hit with persistent drought. The changes in the House bill would lead to a net benefit for cotton producers of $438 million over 10 years, but it is opposed by Senate Ag Chairman Pat Roberts, R-Kan., whose state would lose base acres as a result.

"This is an issue between the two chairmen," Peterson said, adding he thinks the issue will be resolved.

The plan when the farm bill principal negotiators last met was to work through some language over the break, get some cost scores from the Congressional Budget Office and plan to resolve the outstanding issues starting next week when Congress returns. Peterson said neither he nor Democratic leaders want to carry over the farm bill into 2019.

"On the Democratic side of the House, there is no indication or idea that we want to delay this thing whatsoever," he said.

The National Association of Wheat Growers called on Congress to complete the farm bill during the lame-duck session, citing the uncertainty and loss of some beneficial programs as reasons to move ahead.

"In particular, the outlook for foreign market development funding is in doubt until action is taken," said Jimmie Musick, an Oklahoma farmer and NAWG president. "Additionally, the USDA no longer has the authority to undertake new sign-ups for the Conservation Reserve Program (CRP), which incentivizes growers to incorporate healthy soil, non-tillage, and other similar practices into their operations."

In one area Peterson pointed to concerns about the farm bill, he said he would like to have seen more acreage in the Conservation Reserve Program. The House bill moves CRP acreage to 29 million acres but lowers the rental rates to 80% of the average county rental rate. The Senate bill increases CRP acreage 1 million acres to 25 million acres, but lowers the rental rate to 88% of the county average rate. Peterson would also like to protect the Conservation Stewardship Program, which is phased out in the House bill but maintained in the Senate bill.

Zippy Duvall, president of the American Farm Bureau Federation, didn't specifically mention the farm bill in a statement Wednesday regarding the new Congress. Duvall stressed the need to "strengthen agriculture by fixing the ag labor problems we face, boosting our farm economy via export growth and reducing the burden and cost of federal regulations.

"Supporting the use of farm-grown fuels, fixing our nation's broken infrastructure, supporting agricultural research, and bridging the broadband gap that hurts rural America are also important for a strong agriculture," the Farm Bureau president said. "We hope that the newly elected leaders across the nation will join us in unifying behind these goals."

The replacement trade deal for NAFTA, the United States-Mexico-Canada Agreement, also will come up for a vote in the new Congress. Peterson said doesn't think the trade deal creates big gains for agriculture, but it doesn't translate into a loss, either. He supports the new trade agreement, but he doesn't know how House colleagues will back it.

When asked about tariffs and trade, Peterson said President Trump controls what is going on with tariffs, and there is little a Democratic-held House can do to get Trump to drop steel and aluminum tariffs on some trading partners, or drop the tariffs against China that have halted agricultural trade to what was the top U.S. ag trade destination.

"He's the president and he's doing what he thinks is right and what he said he was going to do during the (2016) campaign," Peterson said.

Moving into next year, Peterson said, the major work of the committee would be oversight of USDA as he pointed to some controversies with commodity checkoffs and the USDA realignment that would move the Economic Research Service and National Institute of Food and Agriculture out the Washington, D.C., area. 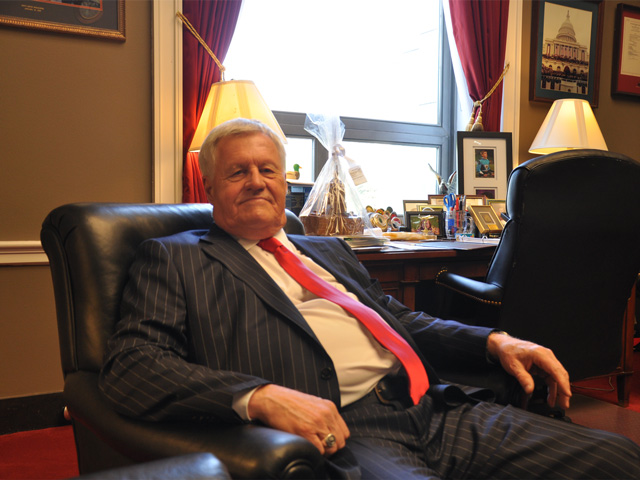