SAN FRANCISCO (DTN) -- Following some criticism of its numbers for trade aid, USDA on Thursday released a six-page paper detailing how economists came up with the calculations for trade damages when creating the Market Facilitation Program and a food purchasing and distribution program for commodities.

USDA emphasized the main focus was examining how much trade declined for a particular commodity following retaliatory tariffs. USDA noted in the paper, as Agriculture Secretary Sonny Perdue repeatedly reiterated, that the department used an approach often taken at the World Trade Organization when the WTO adjudicates trade dispute cases.

USDA calculated damages following retaliatory tariffs by Canada, China, the European Union, Mexico and Turkey. Each country placed various tariffs on U.S. agricultural commodities after the Trump administration implemented tariffs on steel and aluminum imports. In the case of China, other tariffs have been placed on Chinese imports because of a push by President Donald Trump to penalize China for theft of intellectual property.

USDA looked at the value of trade with those countries in 2017 for particular crops and compared that to the trade value with countries after tariffs were implemented. The difference is the calculation of "trade damage" due to tariffs, USDA stated.

USDA officials and the chief agricultural negotiator at the U.S. Trade Representative's office on Thursday testified on trade to the Senate Agriculture Committee. Senators warned that farmers need quick resolution to some of these trade disputes because negotiating new trade deals takes too long.

"On top of already low prices, the agriculture sector has seen immediate negative impacts as a result of retaliatory trade actions," said Sen. Pat Roberts, R-Kan., chairman of the Senate Agriculture Committee. "As time goes on without resolution, the concern of losing long-term market access only grows."

Under USDA's formula, soybeans receive payments of $1.65 a bushel, divided by 50%, but corn producers qualified for only 1-penny-per-bushel payments. USDA highlights in an example that this is because China and the European Union combined imported $309 million in corn from the U.S. in 2017. With 25% tariffs added, USDA estimated combined exports would fall to $117 million. That equates to damages of $192 million. That $192 million is then divided by U.S. corn production of 14.6 billion, which equals only a 1-cent payment per bushel.

Those aid figures were again divided by 50% of a farmer's production.

USDA's numbers vary widely from an analysis by the National Corn Growers Association. The group submitted numbers to USDA calculating losses due to trade disputes at $6.3 billion, or 44 cents a bushel for the 2018 crop.

In an op-ed late last month for The Hill, Kevin Skunes, president of NCGA, noted that when USDA's trade aid came out, "It became strikingly clear that corn farmers would receive virtually no relief."

In calling for the White House to rescind its tariffs, Skunes added, "As history has shown, once you lose a market, it is very difficult to get it back. Our global competitors are aggressively pursuing every opportunity we miss and our margin for error is shrinking. Corn farmers direly need a win."

Payments under the Market Facilitation Program will total $4.7 billion and will be based on 50% of a farmer's production this year for the commodity. That 50% figure is then multiplied by the payment rates below:

USDA opened enrollment for the program at the beginning of September. A producer needs to provide actual production for fall-harvested crops such as soybeans, corn, sorghum and cotton before they can sign up for the aid checks.

The USDA report comes after the group Farmers for Free Trade announced Wednesday it would expand as trade associations in other fields formed Americans For Free Trade.

The new coalition will immediately join Farmers for Free Trade in the multimillion-dollar national campaign called Tariffs Hurt the Heartland, which focuses on telling the stories of the American businesses, farmers, workers and families harmed by tariffs. The stories will be told through town-hall-style events, grassroots outreach to Congress and the administration, social media, rapid response and digital advertising.

The campaign includes a geographically searchable map (http://tariffshurt.com/…) that allows users to find stories of job losses, deferred investments, higher prices and other negative consequences for farmers and businesses in communities across the country impacted by tariffs.

"This campaign will show how tariffs are squeezing the average American family and community from every direction," Farmers for Free Trade Executive Director Brian Kuehl said.

"If you are in Des Moines, Iowa, or Harrisburg, Pennsylvania, it's not just that tariffs are dropping the value of corn, soy or pork," Kuehl said. "Increasingly, it's that the price of buying a dishwasher has gone up, or that a local business has put off expansion because of the price of steel or aluminum.

"By joining with leading retailers, manufacturers and services organizations, Farmers for Free Trade will play a big role in showing the comprehensive damage the trade war is having on American communities."

USDA's paper detailing its trade aid models can be found at https://www.usda.gov/… 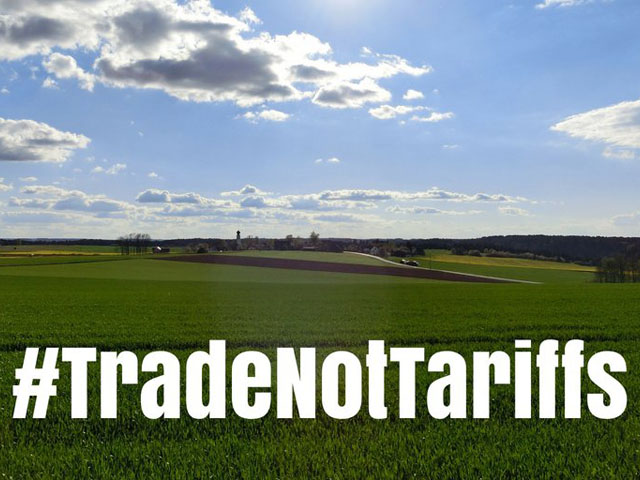