TRAVERSE CITY, Mich. (DTN) -- North American Free Trade Agreement (NAFTA) negotiations with Mexico "are going as well as we can possibly expect right now," Gregg Doud, the U.S. chief agriculture negotiator said on Tuesday, although he noted that negotiators "haven't had market access conversations with Canada of any substance."

In a speech to the International Sweetener Symposium, a gathering of sugar beet and cane growers who are members of the American Sugar Alliance, Doud said, "I think we are going to get there with Mexico in a relatively short order."

He declined, however, to answer a question about whether the negotiations would address the issues that Florida growers have raised about the impact of the surge of imports of Mexican tomatoes and other produce, saying he could not comment because the negotiations are in progress.

But in starting to discuss the NAFTA negotiations with Canada, Doud started off by saying, "O Canada" -- the title of Canada's national anthem -- and then said agriculture issues with Canada have been the same for years, a veiled reference to that country's dairy and poultry supply management programs.

The negotiations with Canada have been "really, really difficult," he said. "We have to get to a situation where we can bring Canada on board and wrap this thing up."

Doud was referring to the NAFTA renegotiation, which Trade Representative Robert Lighthizer, his boss, has said the Trump administration would like to finish by the end of August, so that the current Mexican administration could sign it before leaving office on Dec. 1.

Doud, who has been a Capitol Hill aide and an executive with farm groups throughout his 26-year career, said that once inside the United States Trade Representative (USTR) "you see the extraordinary tediousness of a trade negotiation."

"Where we are is seeing that the details are right, [which] takes longer than you like," he added.

In what may have been a reference to farmer frustration with the Trump administration's trade policy, Doud said the administration is trying "to get this thing squared away" as fast as possible.

"What we are trying to do with NAFTA is send a signal we can start a fire and get a fire put out in relatively short order," Doud said.

In what appeared to be a statement on the dynamics within the Trump administration, Doud said, "We have to help people understand that uncertainty in commodity markets is always bearish. What we have to do in short order is create certainty. I think we are going to be successful."

"It would certainly be my preference we didn't have this amount of uncertainty in markets at this time," Doud added.

Asked about the Trump administration's plan to spend $12 billion on programs to help farmers hurt by retaliatory tariffs, Doud said he would leave that topic to the Agriculture Department, which will run the program.

But he said USTR is "mindful" that the United States has agreed to a limit of $19.1 billion per year in "amber box" subsidies, which means they are market-distorting.

Noting that the United States spent $3.8 billion on those subsidies last year, Doud said, "you want to give yourself a little room in what we can spend."

Doud also said he does not expect any issues with sugar in the NAFTA talks. While other administrations have distanced themselves from the U.S. sugar program to which many other countries object, Doud stressed that U.S. sugar faces subsidies in other countries.

"I can't think of a commodity that is more distorted," he said. "If you think there's a problem in steel, take a look at the sugar market."

On China, Doud defended the Trump administration's tough stance, saying the Chinese have both demanded access to U.S. agricultural knowledge and attempted to steal it.

Doud also singled out China for spending more on farm subsidies than it is allowed under World Trade Organization (WTO) rules.

"We think China has done in excess of $100 billion more in subsidies to its farmers than it was allowed to do," he said, noting that China has not reported its subsidies to the WTO since 2010.

The Obama administration brought a case against China in the WTO over those subsidies for crops such as corn and wheat, but the case is still working through the WTO's process.

But Doud said it is not possible "to make" China do anything. With the Chinese, he said, it is necessary to "help them understand" that its subsidies hurt its own economy as well as farmers in the rest of the world.

Meanwhile, India is far in excess of its WTO subsidy limits in rice and wheat, Doud said.

Other countries have urged the United States to return to the WTO negotiating table, but Doud said, "We need more analysis of the situation before we are ready to negotiate. The situation is vastly different from when the Doha round began."

Doud also praised the Trump administration for its unwillingness to extend Generalized System of Preference (GSP) privileges to developing countries so that they can export duty-free to the United States if their policies run counter to U.S. interests.

Doud said U.S. negotiators are having "real good conversations" with Indonesia about GSP while there is still "work to do" on conversations with India.

The United States needs to negotiate more free-trade agreements, Doud said, noting that the European Union has been negotiating with the Mercosur trade bloc countries in South America as well as with Japan, Canada and Mexico. But in order to conduct a bilateral negotiation, he said, "you need a dance partner," and Japan has been reluctant. 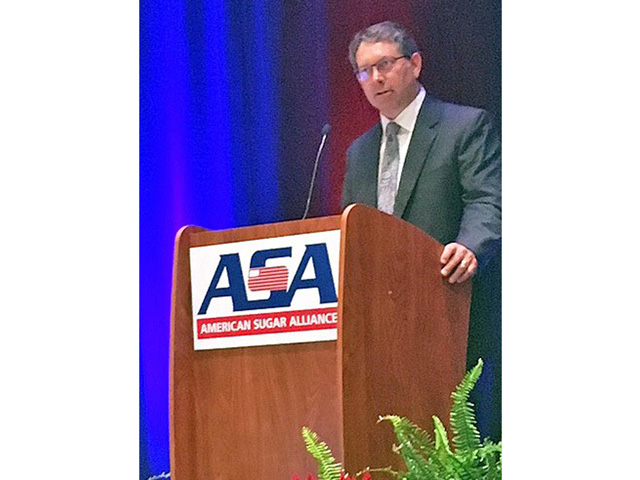