OMAHA (DTN) -- Brittany Wilbanks doesn't need to look at the U.S. Drought Monitor map to know it is extremely dry in Missouri this growing season. Wilbanks and her husband, Seth, farm and raise cattle near Sedalia, Missouri, and have seen Mother Nature constantly throw weather curveballs at them this year.

"It's been our toughest year by far," Wilbanks told DTN. "We are penciling numbers and thinking of inventive ways to make this operation float. I know it's scary for everyone right now."

For many Missouri cattle producers, the drought has limited the amount of forage that is available to their herds. The dry conditions have forced some into feeding hay already and has many cattle producers scrambling to find alternative sources of feed for their herds.

Dhruba Dhakal, a Keytesville-based agronomy specialist for the University of Missouri Extension who covers five counties in north-central Missouri, said the drought has turned most forages dormant in his region. Tall fescue, a common grass forage grown in the state, is dormant right now, but with rains, it could grow again in the fall, he said.

"Drought pasture management is very important right now, as you don't want to overgraze the grasses," Dhakal said. "Overgrazing could cut yields long term and could lead to weeds (growing)."

Dhakal is holding a series of drought-grazing meetings in his region in the coming weeks. Subjects covered in the meetings include proper drought pasture management, alternative crops that could be used for forage, and testing drought-damaged corn for high levels of nitrates, which are deadly for cattle.

In recent weeks, Dhakal has been busy visiting farms in his region, testing corn for nitrate levels. About 90% of the corn he has tested had dangerously high levels of nitrates, he said.

Dhakal said the good news for cattle producers planning on cutting silage is that this corn can still be utilized as feed. During the fermentation process of ensiling corn, nitrate levels will usually decline about 25% and the feed's nitrate levels will drop to safe levels.

Those who would like to test their corn for nitrates level can contact their local Extension office, he said.

Wilbanks said her home area of west-central Missouri has seen only scant precipitation this growing season, including about just over an inch of rain in July. Their hay fields are averaging about 30% lower than normal yields, and they have been feeding hay to their cow herd since July 15 with the pasture grass dried up.

Last year, they didn't feed their first bale of hay until Dec. 10, she said.

Despite these drought complications, the Wilbanks are hoping to avoid selling any of their 250 momma cows, as these are the heart of their farming operation. They did have some bales left over from the previous growing season and are in the process of baling wet corn, she said.

The process of baling wet corn involves mowing corn about a foot off the ground then running the baler directly over the rows and net-wrapping the bales, Wilbanks said. Many cattle producers in their area are chopping corn for silage.

"We have a silage pit, but we don't have the equipment to feed it, so we went for the wet baling," Wilbanks said.

They have never baled wet corn before, so it has been a learning process, she said. They hope the bales have 15% protein and a relative feed value (RFV) of 95 or better.

The Wilbanks also have been baling waterways and roadside ditches to obtain more forage. In addition, they also have a couple custom baling jobs to help make ends meet. Brittany also recently took an off-farm job.

"As beginning farmers, we have a bit of an unstable foundation to begin with, and the future is more uncertain and scary," she said.

Farther to southwest, Kalena Bruce has also seen the effects of the drought. Bruce and her husband, Billy, run cows in the rolling hills of southwestern Missouri near Stockton.

While their home of Cedar County is in a lower designation of drought than farther north, they too have experienced drought-related issues. A spring on one pasture has dried up, and they are having to pump water out of a nearby river two times a day to supply their cattle with water, she said.

"It's pretty much taking up one person's entire day to take care of this herd," Bruce said.

On another of her parents' farms, the ponds have dried up and they were forced to move the cattle grazing there to another farm so they have access to water.

Much like the Wilbanks, the Bruces have also already starting feeding their cows hay, starting the last week of July. They had stocked grass for the fall, but it has burned up with the lack of moisture and now the grass has no nutritional value, she said.

Their hay production this summer has been around 50% to 65% of normal, so hay is already in short supply, Bruce said. The Bruces have also consolidated herds of their cattle in order to give some farms a break. And they're praying for rains.

"We will most likely sell our calves early because we don't have the hay to wean them properly, which means getting less for our calves this year," she said. "We hope to not have to sell cows. This market is horrible right now, and we would lose substantial money to do so, but time will tell."

Bruce said quite a bit of corn silage is being cut in their area, as well.

Some areas of Missouri have seen a close-to-normal growing season.

Dave Tidman, who raises corn and soybeans and has a cow/calf herd near the Kansas/Missouri border town of Amoret, Missouri, said pasture is "holding on" in his home area of Bates County.

His particular area saw a heavy rain in July, but other areas around him have not been as lucky. He had 5.3 inches of rain in July, but a neighbor just a few miles north of him only has had six-tenths of an inch, he said.

"I think most of the folks around haven't started feeding hay yet," Tidman said. "Of course if it were to stay hot and dry in the coming weeks, then we might have to start feeding some hay."

Tidman said some silage might be cut in his area, but this is not a regular practice every year. Corn yields appear to be fairly good in the region with some areas being better than others, he said.

The University of Missouri released a press release in July regarding conserving winter pastures.

Here is the link: https://extension2.missouri.edu/… 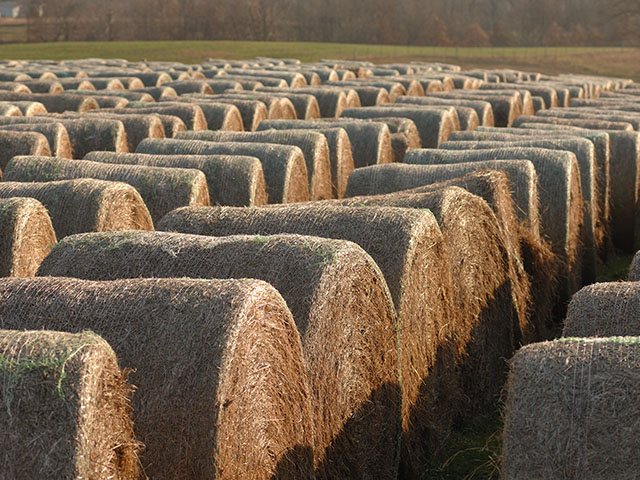