OMAHA (DTN) -- The Trump administration on Monday pumped up the prospects of increased agricultural exports to China while expecting to see announcements on Chinese tariffs against U.S. agricultural products lifted following a joint statement issued by the two countries this past weekend.

Agriculture was highlighted in the joint statement issued by the U.S. and China on Saturday following trade talks between the two countries last week. "Both sides agreed on meaningful increases in United States agriculture and energy exports," the two countries said in the joint statement. "The United States will send a team to China to work out the details."

President Donald Trump tweeted out Monday morning, "Under our potential deal with China, they will purchase from our Great American Farmers practically as much as our Farmers can produce."

Ted McKinney, USDA undersecretary of trade and foreign agriculture, spoke Monday to reporters from China, repeating multiple times he was "very cautiously optimistic" on the talks with China. "I don't want people to get overly excited. I think we should be very cautiously optimistic," McKinney said when told of Trump's tweet. "I do like the tweet, though."

Markets on Monday responded quickly to the enthusiasm about increased trade and the freeze on new tariffs. Most soybean contracts, including the November contract, were up 14 3/4cents to 16 cents a bushel, in early trading Monday. The Dow Jones Industrial Average also started out strong Monday, jumping up 340 points in early trading as well.

McKinney said he understood that Secretary of Commerce Wilbur Ross would lead a delegation back to Beijing next week "and, among other things, ag will be one of the focal points."

In April, China announced proposed 25% tariffs on as much as $16.4 billion in U.S. agricultural commodities, the most notable being soybeans. The U.S. exported $14 billion in soybeans to China last year. Even though the tariff was proposed and not implemented, it led to a sharp decline in soybean sales to China.

China also has imposed a 25% tariff on 128 other products, including pork. Pork tariffs in China jumped in early April from 12%-20% to as high as 45%, depending on the specific product.

"Well, the specifics are not clear yet," McKinney said. "I think that's what next week is about, but the reason I'm very cautiously optimistic is that I think is set for more concrete solutions next week. I'm not aware that any specific commodity has been discussed ... I don't know that specific commodities or issues have been discussed, but I think the door is wide open for those to be picked up next week, and for that I am grateful and excited."

McKinney noted a key focus of last week's talks in Washington, D.C., was to substantially reduce the U.S. trade deficit with China. "We are told ag is very much in that mix," he said.

McKinney noted he was in southern China already for an agricultural trade mission. He toured a major food show in China and met with chefs and restaurant owners as well. McKinney said the object of the mission was to build trust, and he believes that was successful.

"There is still very keen interest in U.S. agricultural and fiber products," McKinney said. "I shouldn't be surprised, but given the issues we are facing on trade, it was so wonderful to see the incredible receptivity to U.S. products," he said, citing the emphasis on quality, safety and volume of U.S. agricultural commodities. "And it continues to bear out in this case as well."

China already announced last week it was dropping the 178.6% anti-dumping tariff slapped on U.S. sorghum products. Chinese officials cited demand and need in the aquaculture and pork industries for dropping its tariffs and trade investigation.

McKinney said there were crops that Chinese buyers were enthused about, including sorghum, and that were having problems with exports in recent months.

"What I detected from several buyers is there is quite a lot of excitement about sorghum," McKinney said. "If that's the shape of things to come, I think it bodes well. But that's the only commodity where we found enthusiasm and excitement, but that's just because I didn't get a chance to visit with every single one in depth. At least I hope that bodes well." 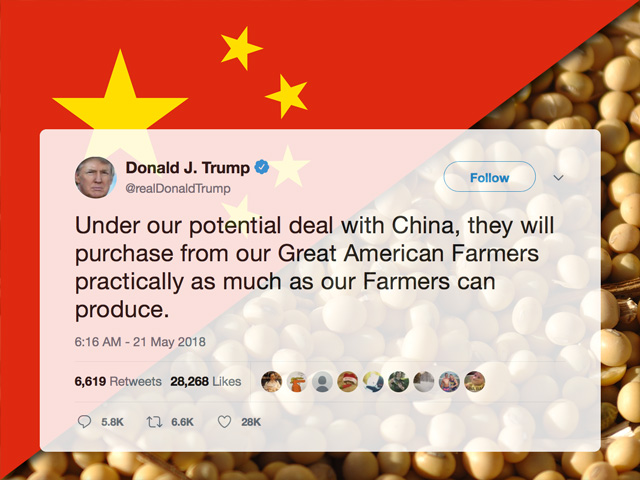