The early rounds of the 2018 row crop season have some notable similarities to 2014. Winter temperatures were the lowest since that year in many northern and central areas, punctuated by a harsh cold wave in the first three weeks of April. Much of the Midwest and the Northern Plains had the coldest April 1-18 stretch on record.

The cold, along with several occurrences of heavy and record-breaking snow, have led to fieldwork getting off to a very slow start. Even preliminary tasks, like fertilizer application, have been close to impossible to accomplish.

As for corn planting itself, only 5% of the U.S. corn crop was assessed as being planted as of April 22, only one-third of the five-year average of 15%. That is the slowest rate of planting at this point in spring since -- you guessed it -- 2014. In 2014, at approximately the same time in April, U.S. corn planting was only 6% finished, compared with an average 14%.

In between these two years, 2015 started out on the slow side as well; only 9% of the U.S. crop was planted as of the first 20 days or so of April, versus an average of 13%; 2016 had a brisk pace to planting out of the gate, with 30% in the ground compared with a 16% average; and a year ago, corn planting going into the last part of April sported a 17% finished rate, just one percentage point lower than the average 18%.

Going into the end of the month of April and early May, weather conditions do look more favorable for fieldwork and planting progress, with higher temperatures and variable precipitation. The entire crop production system will likely be taxed, with a few days' worth of opportunity calling for many jobs to be done almost simultaneously. Another key detail will be the trend during the summer, and whether temperatures illustrate a benign pattern for the reproductive stages of corn and soybeans.

Here again, 2014 offers an interesting illustration for a point of reference. Despite a slow start to planting season, corn (14.2 billion bushels) and soybeans (3.97 bb) both set new records. A big reason for that success, despite the late start, is how summer temperatures developed. The summer season of 2014, according to the Midwest Regional Climate Center, featured temperatures that were, in most areas of the region, from one to three degrees Fahrenheit below normal. Such a mild pattern allowed crops to go through pollination, flowering, and fill stages with very little stress -- and yields responded accordingly. In fact, corn yields in 2014 came in at 171 bushels per acre for corn, and 47.8 bpa for soybeans. Both yield numbers were record highs.

It's obvious that weather from here on will be key to planting progress. In 2014, U.S. corn planting added 13 percentage points from April 20-27 to 19%; ten points to 29% from April 27 to May 4 (still 13 points behind the average 42%); and then a significant 30 percentage points in one week between May 4 and May 11, leaping to 59% complete, and pulling ahead of the average 58% for that point in the season. It is uncertain, looking at forecast models, if the opportunity for a repeat of the 2014 catch-up rate will be available in that same timeframe this year. 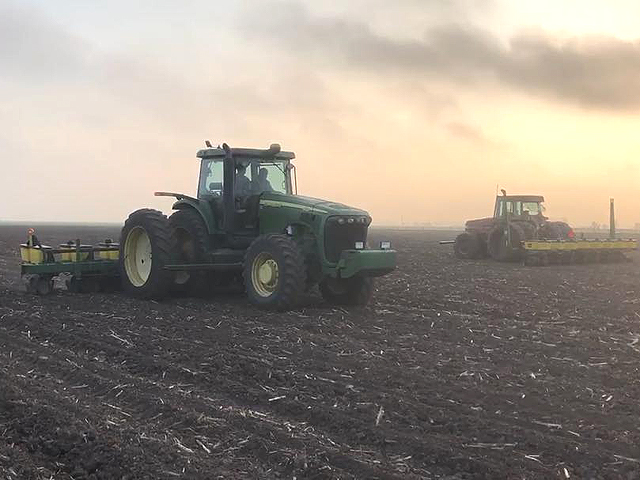