ARLINGTON, Va. (DTN) -- A lower U.S. dollar value could boost agriculture exports, but the long-term outlook offers no real light at the end of the tunnel for the struggling farm economy, USDA's chief economist said on Thursday.

The USDA Agricultural Outlook Forum, held just outside Washington, D.C., is the first opportunity for USDA economists to change their long-term forecasts for crops and livestock production. The bottom line of all of the spreadsheets and bar graphs is that there is no quick reversal for commodity markets on the horizon.

As Agriculture Secretary Sonny Perdue put it, "That's not a path to prosperity." Perdue added that various weather disasters and market challenges tested farmers in 2017, and similar conditions are expected over the next crop year. "Once again, these conditions are testing the resiliency of the American farmer."

While USDA right now projects parity this year for corn and soybeans, long-term trade expansion in soybeans will put pressure on corn acreage, but also other crop areas in the future, Johansson said.

"Our latest long-term baseline suggests soybean area will match or exceed corn area for much of the next decade, supported by import demand from China," Johansson said.

USDA releases more detailed forecasts on Friday morning, but based on the acreage forecast and USDA's long-term projections for yields released last week, the production forecast would look like this:

Touching briefly on prices, USDA forecasts corn prices for the 2018-19 crop at an average of $3.40 a bushel (bu), up 10 cents from the latest projection for the 2017-18 crop, according to the February World Agricultural Supply and Demand Estimates.

For soybeans, the average 2018-19 price is forecast at $9.25 bu, which is 5 cents below the latest projection for the old-crop.

Wheat prices are projected to increase 10 cents bu to $4.70 bu for the 2018-19 crop year. The bump in wheat prices comes because of last year's drought in the Northern Plains and current dry conditions across much of the winter-wheat states.

"Looking forward, net farm income is expected to remain flat over the next 10 years, and when accounting for inflation, to fall in real terms," Johansson said.

While farm income is flat, the overall debt-to-asset ratio for farms still remains relatively low at 13%, compared to 22% at its peak in 1985. Still, one-third of poultry farms and 20% of cotton farms are now highly leveraged, meaning debt-to-asset ratios are above 40%.

While these overall ratios remain low, overall farm debt is approaching record levels at more than $400 billion with real-estate debt expected to top the 1981 record of $218 billion. Banks are reporting strong commercial demand and a significant share of loan restructuring going on. Maturity dates on farm loans are being extended as well, "reflecting increased constraints on producer ability to repay," Johansson said.

The more dramatic story overall, Johansson said, is that working capital on farms has dropped by more than 65% since 2012.

What might change that is improved economic growth, and the declining value of the dollar against most global currencies that could boost exports. For countries that buy U.S. agricultural products, the dollar is falling against those currencies, Johansson said. The only major export competitor seeing a more declining currency is Argentina with its peso because of high inflation and policy uncertainties in that country.

Johansson also put stock in the potential that the Trump administration will close some trade deals, citing that trade agreements could open up new markets for U.S. producers. Johansson noted that countries that currently have free-trade agreements with the U.S. -- including Canada, Mexico, South Korea and Latin American countries -- account for roughly 45% of all U.S. agricultural exports.

Where the weather giveth, it also taketh away. Johansson said dryness in Argentina has pulled down the soybean crop there, yet beneficial rains in Brazil have pushed up soybean production estimates.

Johansson and Perdue pointed to potential economic relief coming for producers in the next farm bill, but Perdue also indicated the importance of finding markets for commodity goods.

"I like to say I don't know a farmer or rancher in this country who wouldn't rather have a good crop and a market than a government payment," Perdue said. 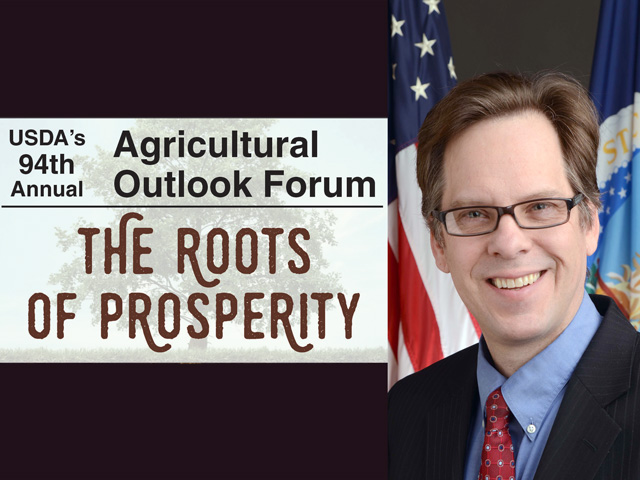