WASHINGTON (DTN) -- The quick decline in cash grain sorghum prices was highlighted by Agriculture Secretary Sonny Perdue on Tuesday as he pointed out the sensitivity of commodities to trade news right now.

Reflecting a little tit-for-tat with the U.S., the Chinese Ministry of Commerce announced Sunday it was conducting an anti-dumping investigation into U.S. sorghum exports to China. The decision came after the Trump administration placed tariffs on washing machines and solar panels, affecting exports from China to the U.S.

While some DTN cash grain bids moved little from Friday to Monday, some spot sorghum (milo) prices across the Plains dropped as much as 88 cents from Friday's close to Monday.

Perdue said he thinks the sorghum situation will mollify over time, but he said it reflects the sensitivity to bad trade news.

"It just shows you as an example how fragile and how sensitive the ag economy and commodity prices are now to trade disruptions, and we need to be careful when we take actions there," Perdue told members of the House Agriculture Committee as he testified on the state of the rural economy.

"The state of the rural economy is fragile. It obviously depends on some things you all are struggling with," he said.

Perdue has said USDA was putting together a contingency plan in case the U.S. has to withdraw from NAFTA, though he said Tuesday there was little USDA could to do to respond to a rapid price decline, such as sorghum prices falling in response to a Chinese trade investigation.

"If we could do something specifically about prices, we would have done that a long time ago," Perdue said. "I wanted to point out this morning the sensitivity of the commodity markets are just that. (Snapping his fingers) They can react overnight ... You need to be very careful with trade policies and how we react internationally not to create action and reaction that could put our farmers at risk."

Perdue noted the trade debate has created a lot of anxiety over the past year as the White House works to renegotiate the North American Free Trade Agreement and reduce the overall trade deficit with China.

"We know in world trade, China has a policy of dominance in many sectors," he said. "The good part about it is American producers are so productive that we've got to have good trade policies."

Perdue added, "We cannot be responsible for China's reaction. Obviously, the administration knows we've got to be prepared for that. We've advocated on behalf of the ag economy to be prepared for any kind of situation that may arise or action they may take."

On NAFTA, Perdue said he think he sees a little light at the end of the tunnel on getting a deal once the Mexican presidential election is over in early July.

"I am a little more hopeful than I have been. I think we have seen more movement on Mexico's side than Canada," the secretary said. "I think if we get the Mexican politics out of the way, we'll get a deal before the end of the year."

Tuesday's hearing dealt with a range of issues as lawmakers asked about topics specific to their constituencies and the lead-up to anticipated work on a farm bill by the House Agriculture Committee in the coming months. Some lawmakers were concerned about their local commodities, land-grant funding, rural broadband or nutritional funding in the farm bill. The overall state of questions reflects that there may not be enough funding in the next farm bill or next federal budget to please everyone.

Rep. Collin Peterson, D-Minn., ranking member of the committee, said he's concerned about continuing price declines, especially if farmers aren't buoyed by large production that has helped offset the price declines in recent years. A new farm bill might not be able to help improve the safety net the way farmers might hope, he added.

"If I had my way, I'd like to see a farm bill with an improved safety net," Peterson said. "But there is no new money, so I don't know how we are going to do that."

Perdue declined to give details of President Donald Trump's proposed budget for next year. The budget plan is expected to be released on Feb. 12. Last year's proposal called for $231 billion in cuts to mandatory programs in the farm bill, but was largely ignored by Congress. Perdue also didn't play a role in last year's budget. He said Congress should again expect recommendations for cuts.

"There are going to be some differences, yes," Perdue said. "We're going to be trying to move forward in a fiscally responsible way." 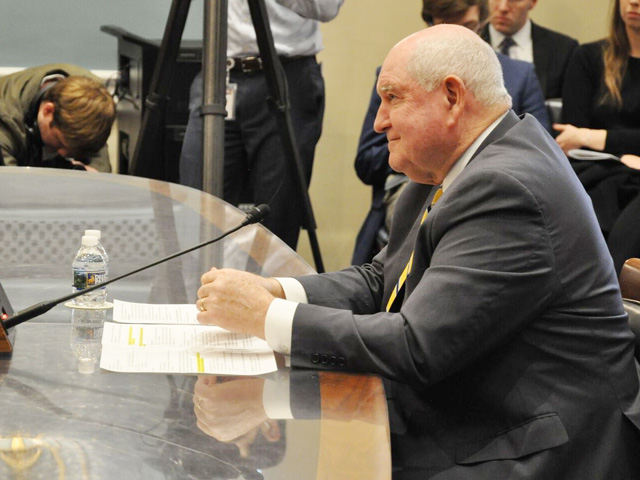