While blockchain is the technology behind crypto-currencies such as Bitcoin, the concept of digitized papertrails has been creeping into the commodities market, mainly with gold. Suddenly, blockchain is entering the world of agricultural commodities.

As Louis Dreyfus Co. described, with the help of three banks, a pair of shipping groups and USDA, Dreyfus and the buyer, Shandog Bohi Industry Co., made the trade with a full set of digitized documents, including the sales contract, letter of credit and inspection certificates. The data was automatically matched from buyer to seller. The end result was "significant efficiency improvement for all participants in the chain. Time spent on processing documents and data was been reduced fivefold," Dreyfus stated in a news release.

Louis Dreyfus Co. sees the commodity and finance industries moving more aggressively to digitization as a way to improve both efficiency and security.

Blockchain technology was reportedly all the rage at the World Economic Forum in Davos, Switzerland. Talk about blockchain transactions also cropped up last week in Des Moines at the Peoples Co. Land Investment Expo.

The explosion of agricultural chatter about blockchain technology raises a simple question: What the heck is a blockchain?

Blockchain is characterized as a "shared ledger" of a digital sales record or history of data use or ownership. Blockchain creates the capability to digitally verify, handle and transfer all records of a sale, including the complicated elements such as contracts, inspection information and letters of credit. By replacing middlemen with digital codes, the technology promises to eliminate human error and middleman fees. Security is built into a blockchain because the blocks of data move instantaneously from one digital owner to another. As sales and lines of financing occur, more blocks are created in different data locations. When a change of sale occurs, all of the ledgers or blocks of data are coded at the same time with the new information.

Forde is the director of digital currency technology at the Massachusetts Institute of Technology Media Lab. He also drafted memos on the direction of digital currency while working as a White House adviser for emerging technologies in the Obama administration. Information on a blockchain transaction moves in much the way people around the world can now seamlessly exchange emails or open websites using different technologies. The data chain provides confidence for currency, product identity, company reputation and global markets, he said.

"Are there any systems in the ag industry that have these similar features?" Forde asked. "When there is, that's when disruption happens."

Forde noted that identity theft now costs the economy $24 billion. Blockchain tools can reduce such problems. Medical records also can be traced and accessed from different doctors. MIT built a system for people to own and access their own medical records and share them with new doctors or specialists.

As lawmakers worry about waste, fraud and abuse in government programs, Forde said blockchain technology can be used to distribute social welfare tools.

Former Agriculture Secretary Tom Vilsack, now president and CEO of the U.S. Dairy Export Council, told attendees at the expo how blockchain will change both global and domestic markets. That includes creating a whole new realm of traceability expectations from commodity buyers.

"The ability to trace that gallon of milk or bushel of corn from farm-to-fork, is going to become incredibly important because as we try to export and deal with the numerous requirements of foreign countries and their consumers, folks want to know more about where their food is coming from," Vilsack said. "They want to know who produced it. They want to know the environmental stewardship of that producer and they want to know if their animals were raised in a certain way. They want to know what inputs have been used. And blockchain provides the opportunity to have that information."

The dairy industry has a new ISO-approved dairy certification program that lays out specific stewardship requirements. Such standards are going be needed as blockchain grows in trade.

"It's not necessarily fully implemented in food and business today," Vilsack said. "But it's one of the disruptors that is occurring along with drones and sensors and artificial intelligence and virtual reality that are changing the way in which business will be conducted and the way consumer expectations will be met."

Agricultural commodities can move and be sold multiple times globally, going through several international brokers and shippers. That creates potential for fraudulent sales, as was the case in 2017 when nearly 600,000 bushels of soybeans from Ukraine were sold to the U.S. by a Turkish exporter who falsely claimed the soybeans were organic. USDA noted the situation revealed a gap in the system that allowed paperwork to be falsified while the soybeans were on a cargo ship headed to the U.S. Blockchain data from the source seller could be used to alert potential organic buyers in the U.S. that the soybeans had been fumigated.

With dairy products being used in infant formula, snacks, protein shakes and even pharmaceuticals, Vilsack said the fractionizing of those commodities requires more ability for food companies to trace ingredients backward and forward.

"If you can, in fact, trace a commodity from its inception, its production, the moment it is born and raised to being processed, packaged and ultimately sold to your family, that allows and empowers the consumers to ask more questions and get more information," Vilsack said.

The demand for more product information creates the need for some kind of method in which consumers can ensure the seller meets expectations. This is part of the growing global middle class in developing countries looking for reputable sellers. So blockchain is going to increasingly come back to the farm gate.

"We're now having markets begin to ask more about what you are doing on the farm stewardship side, what are you doing on the animal welfare side? What did you feed this animal? What medicines did you use, if any?" Vilsack said. "All of that with blockchain becomes the database with which you can answer and respond to those questions. Producers need to understand that is coming. And they need to be thinking about their operation relative to the technology that will be required and the demands that will be required not just by our consumers but consumers all over the world."

"Their government is very interested in making sure they can assure their consumers that they are really serious about this so they have required a whole set of health requirements and safety requirements," Vilsack said. "Well, now those plants have to be audited and have to reassure the Chinese government, through the U.S. government, that they meet those standards. That's an indication of what's to come." 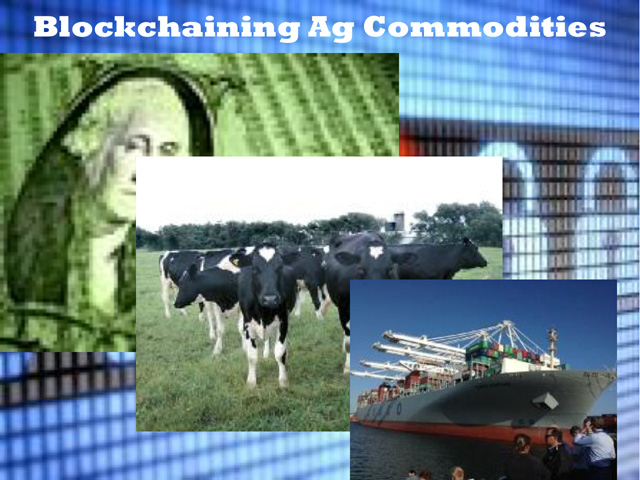