NASHVILLE, Tenn. (DTN) -- To roaring and often standing applause, President Donald Trump told members of the American Farm Bureau Federation on Monday that he has their backs on regulations, has improved their businesses through tax reform, and that his administration will make trade fairer while also supporting the next farm bill.

The president also signed an executive order to streamline and expedite requests to locate broadband facilities in rural America. That marked the first step in implementing some of the recommendations of the Interagency Task Force on Ag and Rural Prosperity. The president also signed a memorandum to support locating broadband towers in rural America, including on federal properties managed by the Department of Interior.

While some farmers may have wanted to hear more on trade or other topics, the president's speech allowed him to soak up the adulation of an adoring rural audience. Trump said he was pleased to be the first president to speak to the group in more than 25 years, but was disappointed to hear it was the 99th annual meeting. "You understand. One hundred is so much cooler, I have to be honest. So I will be back next year."

"Our nation's farmers are just the most incredible people and we are doing a job for you. You are seeing it like nobody else. Regulation. Death tax. So much. You are a big beneficiary, and you are producing like nobody else."

Getting into the meat of his speech, Trump said, "The American dream is roaring back to life."

He then dove into the tax law he signed just before the holidays, saying the $5.5 trillion in tax cuts -- offset by $4 trillion in other revenue changes -- is "the most significant tax cuts and reforms in American history," adding "with most of those benefits going to working families, small businesses and family farmers."

Trump noted businesses have started increasing raises, and more than 100 companies have given bonuses to workers. "More than 1 million workers have already received a tax-cut bonus," the president said. "Something nobody thought would happen when we made the bill."

Then, in talking to a group that states it is nonpartisan, the president pointed out that every Democrat in Congress "voted against tax cuts for the American farmer and American worker." Republicans delivered the tax cuts, the president said, "And if the Democrats ever had the chance, the first thing they would do is get rid of it and raise up your taxes, sometimes by 40, 50, 60% from what we've done. We can't let that happen."

The president said that, under the new tax law, a typical family of four earning $75,000 will see an income tax cut of more than $2,000 -- slashing their tax bill in half each year.

Further, American businesses are seeing their tax rates go from 35% to 21%, "and on top of that, you have a lot of advantages." Small- and medium-sized businesses also "will receive massive tax cuts," the president said, pointing to a 20% deduction in the tax law for business income.

"All American businesses, including American farmers, will be able to deduct 100% of the cost of new equipment in the year you make the investment," the president said. "That is something that I think is going to be the sleeper of the bill. You deduct it all in one year instead of many years."

Then, hitting on an issue close to the American Farm Bureau Federation policy, the president pointed to the doubling of the estate-tax exemption from $11 million per married couple to $22 million. "And from now on, most family farms and small business owners will be spared the punishment of the deeply unfair estate tax, known as the death tax -- so you can keep your farms in your family," Trump said to a roaring standing ovation.

To a little laughter, Trump said, "Obviously, you love your family or you wouldn't be standing. Not going to help you much. Going to help them a lot."

The higher exemption rate in the estate tax, like most of the individual tax cuts, is set to expire at the end of 2024. American Farm Bureau President Zippy Duvall has said he and AFBF members would push to make those tax cuts permanent.

Trump added, "In every decision we make, we are honoring America's proud farming legacy."

Trump added, "Years of crushing taxes, crippling regulations -- it was horrible -- and corrupt politics left our communities hurting, our economy stagnant, and millions of hardworking Americans completely forgotten. But they, guess what, are not forgotten anymore.

Again, warming to the Farm Bureau crowd, Trump started talking about his administration's efforts to roll back regulations. "As we put money back in the pockets of all Americans, including our farmers and ranchers, we are also putting an end to the regulatory assault on your way of life," the president said.

The president talked of past administrations sending an "army of regulators" into rural America. "For years, many of you have endured burdensome fines, inspections, paperwork and relentless intrusion from an army of regulators at the EPA, the FDA and countless other federal agencies."

Trump then touted the canceling or delay of 1,500 regulatory actions "or assaults" in his first year in office -- "more than any other president in history. We have cut 22 regulations for every one new regulation. Think of that one."

Again taking a shot at his political opponents, Trump said, "If the Democrats got their way, they would reinstate every single regulation we are cutting." He added that such regulations would burden farms.

Highlighting another issue that was significant for farmers during the campaign, the president hit on the EPA Clean Water Act rule under the Obama administration. "The terrible Waters of the United States rule, you know about that. It sounded so nice, so innocent, and it was so bad." The president added about WOTUS, "We ditched the rule." That led to another standing ovation.

Trump said the administration is now "streamlining regulations that have blocked cutting-edge biotechnology -- setting free our farmers to innovate, thrive and grow. Because we know that our farmers are the future. So true."

While AFBF has focused on getting the president's attention on trade and the North American Free Trade Agreement, Trump touched on it just briefly. "On NAFTA, I am working very hard to get a better deal for our country, our farmers and our manufacturers."

Canada and Mexico are making a fortune, the president said, indicating why the other two countries are slow to negotiate. "We're going to make it fair for you people again."

On the farm bill, Trump said he is working hard to get the farm bill done on time. "And I support a bill that includes crop insurance, unless you don't want me to." That prompted another standing ovation.

South Dakota Farm Bureau President Scott VanderWal, vice president of AFBF, said the president's speech hit a lot of patriotic points. VanderWal was glad Trump mentioned NAFTA. "There are people out there nervous in farm country, if they can improve it for industries, if they can improve it for agriculture, that's great, we're all for it," he said.

While Farm Bureau has stressed agricultural labor, VanderWal said Trump's brief comments on immigration do fit into AFBF's views that the borders need to be secured as well.

"What we really need is a legal, reliable labor supply," he said. "If that starts by controlling the borders, that's fine."

Briefly afterward, Sen. Pat Roberts, R-Kan., said of the president's remarks, "I don't know what nail he missed. He hit every one of them down." 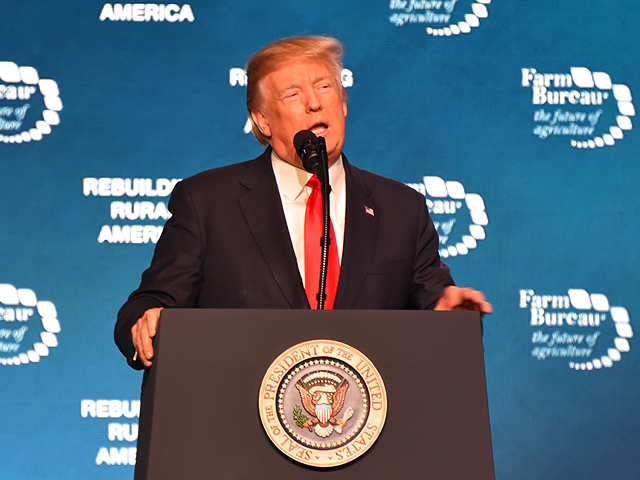