OMAHA (DTN) -- Each year, DTN publishes our choices for the top 10 ag news stories of the year, as selected by DTN analysts, editors and reporters. We continue counting down with No. 7 being loftier times for livestock, and No. 6 focusing on continuing consolidation of agricultural companies.

DTN's No. 7 top ag news story of 2017 highlights how much brighter it was this year for livestock than it has been in a while, ranging from higher numbers of cattle, to pork industry expansion, to higher meat demand domestically and for export.

HASTINGS, Neb. (DTN) -- Imagine this classic scene of annoyance and aggravation: You find yourself captive at what appears to be the dullest and most socially painful party ever designed by man. You hate the host (read pompous in-law or wife's condescending boss), find the buffet comparable to dumpster diving, bristle at the cash bar, and agonize in the face of chatty table mates who can't shut up about a certain president and their personal theories of global warming.

And just when you're clinging to the cold comfort that most in the banquet hall are probably as miserable as you, a riotous noise of wild celebration rises from three or four tables in the far corner. Who were these easily entertained loners and what could they possibly be drinking?

Now consider the 2017 ag marketing year as one, long sad party. Or so it seemed to millions of grain farmers who fitfully struggled to make a living with $3.00 corn, $3.50 hard winter wheat, and $9 beans. For so many tillers of the soil, the 2017 market needs to be swept to the curb ASAP, along with ugly weather maps, the careers of men behaving badly with women, and North Korea's dangerous launch code.

Yet there's a big exception to this dismal rule, a relatively large contingent of happy revelers who have no intentions of leaving the party early. Indeed, it was the standout profitability of livestock production in 2017 that qualified it as one of the strange year's top stories.

For example, according to the DTN cattle feeding model, every fed steer and heifer that went to slaughter this year returned an average profit of $107.50. At the same time, the Iowa State farrow-to-finish model suggests that barrows and gilts marketed through the year scored a net profit of $12 per head.

Now if you visit enough pubs and pay for enough drinks, it's not that tough to gather a decent collection of winning dart throwers. But to find the few who can split the bull's-eye while blindfolded and carrying a baby takes considerably more effort. In short, not only did red meat producers consistently build equity through 2017, they did so while simultaneously dishing up significant increases in commercial tonnage.

Twelve months ago, the possible price implications of expanding cattle and hog numbers seemed more than a little troublesome. And for the most part they were accurate in predicting much higher levels of production. Interpolating upon the Livestock Slaughter report released Dec. 21, 2017 commercial beef production should total

But while more forecasters did a credible job in anticipating the tonnage consequences of herd expansion, few imagined how easily the market would sweep the streets of added product, few dared to guess the 2017 red meat demand (both domestic and export) would achieve close to rock star status.

While there's many difference ways to measure demand, perhaps this simple metric will drive home the point at hand: in the face of 4% more beef, the average retail price of choice product this year will average close to $5.92. That's off a mere 1.3% from the annual average of 2016. In the face of 3% more pork, the average price of retail pork in 2017 will average right at $3.79, less than 1% below last year.

The winds of change swirled in 2017 as agriculture companies continue to merge and acquire assets, and became the sixth-biggest story of the year in DTN's top 10 ag news stories.

DECATUR, Illinois (DTN) -- The shock value may have worn off agriculture merger and acquisition announcements, but the mega deals continued in 2017.

The agrochemical/seed industry dominated the news with Syngenta and DowDupont finalizing deals, but each of the "big six" has seen some type of business transformation in 2017.

Divestitures are commonly required in large deals to answer concerns over market power and consolidation within specific markets and industries. Those required remedies are now transferring assets and altering portfolios of major suppliers and farmers may see some discombobulation in 2018 as newly combined companies realign product lineups, corporate cultures and human capital.

The trend to combine isn't over. The still simmering Bayer purchase of Monsanto has moved further into 2018. In mid-December, the European Union's antitrust regulators issued formal objections to the deal, indicating addition concessions on research and development may be on the table for Bayer.

Bayer has already agreed to sell major portions of its cotton, canola and soybean seed businesses to BASF for nearly $7 billion if the Monsanto purchase goes through. Also included in the BASF deal is Bayer's non-selective glufosinate-ammonium business, sold under the trade name Liberty, and the LibertyLink trait portfolio, which allows crops to tolerate applications of Liberty herbicide.

The Committee on Foreign Investment in the United States (CFIUS) has completed its review of the proposed merger, and concluded that there are no unresolved national security concerns with respect to the transaction, but what additional concessions the U.S. Department of Justice might require, if any, remains a question.

ChemChina's acquisition of Syngenta closed in May. The Swiss-based company has steadfastly said "Syngenta remains Syngenta" and no branding changes are expected.

Meanwhile, a requirement from the European Commission led Syngenta and Adama Agricultural Solutions Ltd to enter an agreement with Nufarm to sell a portfolio of crop protection products for $490 million. Nufarm will receive off-patent crop protection formulations of herbicides, fungicides, insecticides and other categories (specific products in each area not provided). No employees will be included in the transaction and the only physical assets included are the inventory of products. That deal is expected to close in the first quarter of 2018.

The announcement in mid-December that all publically held registered shares of Sygenta AG have been cancelled and the delisting of shares is anticipated.

Dow Chemical Company and DuPont became one in August after nearly two years of negotiations and regulatory reviews. The combined company, DowDuPont, has an estimated value of $130 billion.

In an acquisition move of its own last fall, DuPont acquired Granular, a farm management software start-up firm, for $300 million.

DowDuPont's plan divides the overall company into three distinct businesses: an agricultural company, a materials science specialist and a specialty products business. In the last hours of the merger, the chemical giant also responded to activist shareholders and shifted several business units to make the materials science company smaller.

On Nov. 1, DuPont closed the divestiture of its cereal-broadleaf herbicides and chewing-insecticides portfolios, as well as certain parts of its crop protection R&D pipeline and organization to FMC.

As part of the financial package, FMC swapped its $700 million Health and Nutrition business to DuPont and trued up the sale with $1.6 billion -- $1.2 billion in cash and another $400 million related to working capital. The business includes a wide range of ingredients that make everything from yogurt to dog food more functional or more nutritious.

With the DuPont assets, FMC Agricultural Solutions becomes the fift-largest crop protection chemical company in the world, with an estimated annual revenue of approximately $3.8 billion. FMC has been realigning its business portfolio in recent years to expand its position in the crop protection market. In 2015, it acquired the multinational crop chemical company Cheminova.

From DuPont, FMC gets nine herbicide-active ingredients and several promising candidates well advanced in the pipeline. FMC estimated that those two products alone will generate more than $1 billion in 2017 revenue. For example, FMC estimated that Rynaxypry and Cyazyprill, two products obtained in the selective-insecticide portfolio, will alone generate more than $1 billion in 2017 revenue.

Brian Baker, DuPont Pioneer Commercial Unit Leader, Multi-Channel Seed Brands, told DTN that the three legacy companies -- DuPont Pioneer, DuPont Crop Protection and Dow AgroSciences -- each have strong, established brands. "We are currently evaluating the best model for serving customers through multiple channels and multiple brands. In the meantime, the way that we do business is not changing, nor is the way that customers purchase and receive products," he said.

After a flurry of sales and acquisitions the previous year, the North American machinery industry stepped back a bit in 2017. A major purchase was the AGCO/Precision Farming deal. After the Department of Justice frowned on a proposed John Deere and Monsanto agreement about Precision Farming in May of 2017, AGCO moved in. By July it announced it would purchase the planting technology innovator. 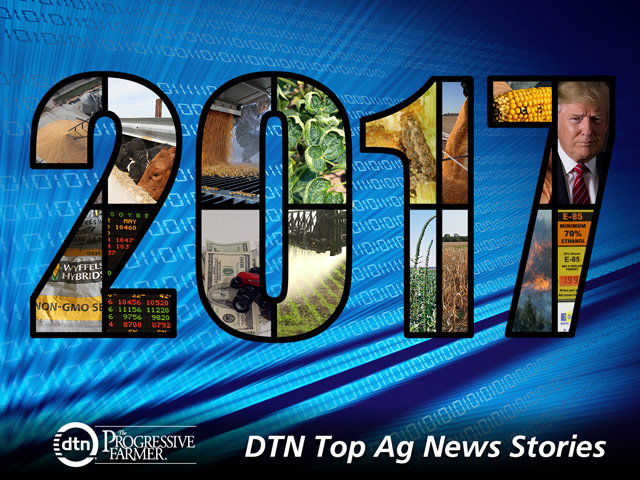