ROCKVILLE, Md. (DTN) -- If you're feeling a little confused about the EPA's new rules on dicamba for 2018, you're not alone.

Last week, EPA made some dicamba herbicides restricted use pesticides (RUP) and issued new labels for them, with tighter use restrictions. We've rounded up some of the most common questions posed to DTN in the past few days on these new rules:

-- Will this affect all dicamba products, including those used in corn and pasture management?

The EPA's RUP classification only applies to any use of the three new formulations of dicamba labeled for (among other things) over-the-top use on Xtend soybeans and cotton. They are Monsanto's XtendiMax, BASF's Engenia and DuPont Pioneer's FeXapan herbicides.

Farmers who routinely use other, older dicamba formulations to control weeds in their cornfields or pastures will not see those products' availability change under the new EPA rules.

However, individual states are in the midst of deciding whether to adopt more restrictive rules that could affect other formulations of dicamba.

For example, the state of Indiana is preparing to pass its own RUP classification for all herbicides with a dicamba concentration of 6.5% or greater. That covers not just the new formulations but also older formulations used elsewhere in agriculture, such as cornfields and pastures.

Be sure to check with your local state department of agriculture to see what additional dicamba restrictions it has created or is considering.

-- Won't this just encourage people to use older formulations of dicamba?

It could, yes. But they might not get away with it as easily as they think, said Tony Cofer, director of pesticide management for the Alabama Department of Agriculture and Industries.

The new labels for XtendiMax, Engenia and FeXapan contain extensive new record-keeping requirements. Among them is a requirement to keep "receipts of purchase" of the dicamba product used on an Xtend soybean or cotton field for two years.

"This is a big deal," notes Cofer. "Because we are still in a gray area here -- wondering are they using old products or new products -- this receipt of purchase requirement is an important aspect of figuring that out."

Remember also that when a state creates rules on herbicide use that are more restrictive than the federal rules, those state requirements trump the federal ones. As mentioned, some states such as Indiana are preparing to adopt their own RUP classifications for dicamba that will govern all agricultural dicamba herbicides, not just the new formulations.

"It will allow them [state regulators] to track sales of all dicamba use in agriculture and more aggressively deal with the issue of people spraying unapproved products," Purdue University weed scientist Bill Johnson said of Indiana's proposed RUP for dicamba.

-- How will this affect my access to the new dicamba herbicides?

The RUP classification limits the sales of the new dicamba herbicides to retailers and applicators who have gone through a certification and licensing process to sell or purchase restricted use pesticides.

That means all applicators, either private or commercial, must undergo their state's RUP training requirements before the 2018 spraying season.

While some farm stores may not have the necessary licensing to now carry the new dicamba formulations, many will -- and ag retailers almost certainly will, said Johnson.

Ag retailers are almost always licensed to sell restricted use pesticides, which are not a new phenomenon.

For example, atrazine is also a restricted use pesticide. Yet many applicators are licensed to spray it in their corn fields, and it is readily available from ag retailers, Johnson pointed out.

However, keep in mind that the new labels also require mandatory training for applicators in addition to the RUP requirements, Cofer warned.

"Not only do they have to be certified as private or commercial applicators, but they also have to get this dicamba use training dictated by the label," he said. "In many states, that is a separate process -- ours is."

-- Do the new labels address all the causes of the 2017 dicamba injury crisis?

Manufacturers of the new dicamba herbicides have strongly disputed that volatility played a role in the dicamba injury seen in more than 3 million acres of soybeans (and untold acres of non-agricultural plants) in 2017.

The new dicamba formulations were designed to be far less volatile than older formulations on the market. However, university weed scientists have conducted their own testing of the new dicamba products and found evidence that volatility remains an issue and was likely a contributor to off-target movement during the 2017 season, Johnson pointed out.

"Everyone who has done this field work [on volatility] has shown there's movement well after application," Johnson said of Purdue scientists as well as his academic colleagues in other states. "I've seen the work, and there is no doubt in my mind that there is volatility taking place."

Beyond volatility, the new labels' ability to control physical drift is only as good as the applicator's ability to follow them, Johnson added.

That could prove harder than ever with the new label spraying restrictions for wind speed and time of day.

According to weather data from one Indiana location in the summer of 2017, Johnson and his Purdue colleague Joe Ikley found that Indiana growers had only 334 hours in June to spray the new dicamba herbicides according to the old labels.

Under the new label restrictions, however, applicators would have had only 48 hours to legally spray the new dicamba herbicides in June of 2017.

"I'm trying to hammer home the limitations of the time we have to spray [dicamba] next year," Johnson said. "We simply don't have the sprayer capacity to spray every acre that needs it during the legal windows available now."

Editor's Note: To get the latest information on using dicamba in 2018, please join us at 9 a.m. CST on Nov. 15 for the online webinar "Dicamba: Where Do We Go From Here?" We'll feature a summary of U.S. university research and experience, farmer experiences, plus comments from state regulators and liability insurers, to provide a template for thinking through 2018 crop and weed control strategies. Registration information can be found here: https://www.dtn.com/… 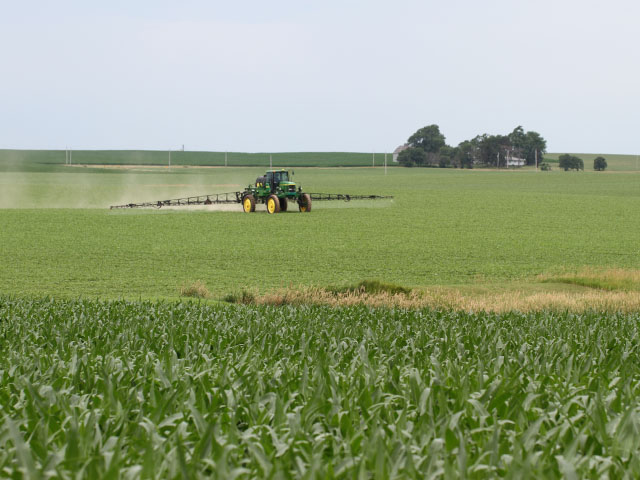