The U.S. Climate Prediction Center (CPC), a division of the National Oceanic and Atmospheric Administration (NOAA), says that the Pacific Ocean equator temperatures have at least a 50% chance of cooling to La Nina values by December. Accordingly, the CPC issued a La Nina watch Sept. 14.

In issuing the watch, CPC details noted an emphasis on subsurface cooling in the equator region waters of the Pacific.

"The most recent predictions ... indicate the formation of La Nina as soon as the Northern Hemisphere fall 2017," the CPC said in announcing the La Nina Watch. "Forecasters favor these predictions in part because of the recent cooling of surface and sub-surface temperature anomalies, and also because of the higher degree of forecast skill at this time of year."

Equator-region Pacific Ocean temperatures have shown a pronounced cooler trend; values catalogued Sept. 5 indicated subsurface temperatures as much as 6 degrees Celsius (about 12 degrees Fahrenheit) below normal. A combination of this deep-water cooling along with a higher track of accuracy in Pacific forecasts at this point in the year are cited as reasons for issuing the La Nina Watch.

"I think that they feel that models at this time of the year are more accurate looking ahead a couple months, which is causing them to have a little more confidence in issuing the watch," said DTN Chief Science Officer Jeff Johnson.

The La Nina Watch may be getting the grain market's attention. La Nina's existence during November-January has a high correlation to sub-par crop production in southern Brazil and Argentina. Should La Nina continue into the U.S. 2018 crop year, the implication is that production could be lower.

"If 2017 weather/field conditions are roughly equivalent to 2010 (adequate subsoil moisture despite drought) when the previous La Nina formed, and 2018 becomes 2011 (reduced subsoil moisture and continued drought), and ultimately 2019 mirrors 2012 (no subsoil moisture and ongoing drought) then both soybeans and corn could be poised for substantial long-term uptrends," DTN senior analyst Darin Newsom said. 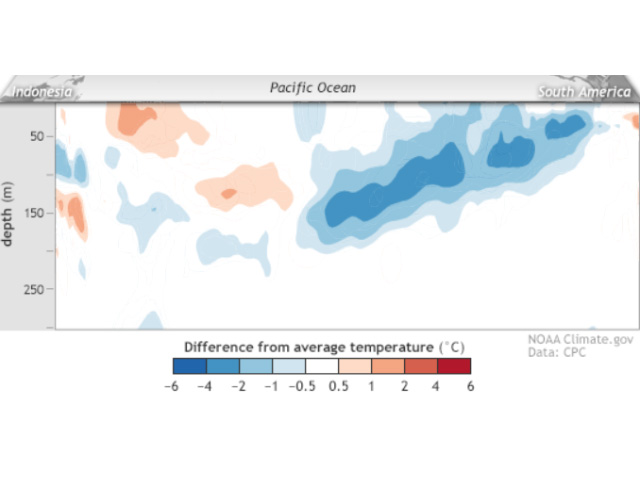