OMAHA (DTN) -- While American families are still hauling their RVs around the country trying to squeeze in one or two more lake trips for the summer, it's also apparently farm-bill road trip season.

The House Agriculture Committee has its road trip, labeled "Conversations in the Field," which included a field hearing in Texas on Monday and another one at Farmfest in Minnesota on Thursday. Now Agriculture Secretary Sonny Perdue is taking off on a five-state RV tour of his own that also will start Thursday, but in Wisconsin instead of Minnesota.

USDA announced Tuesday that Perdue's "Back to Our Roots" tour will focus on getting input on the 2018 farm bill as well as working to increase rural prosperity. Perdue will tour Wisconsin, Minnesota, Iowa, Illinois and Indiana. In a statement, Perdue said the tour will allow USDA to hear from people in agriculture as well as consumers, noting "they are the ones on the front lines of American agriculture and they know best what the current issues are."

Perdue added, "USDA will be intimately involved as Congress deliberates and formulates the 2018 Farm Bill. We are committed to making the resources and the research available so that Congress can make good facts-based, data-driven decisions. It's important to look at past practices to see what has worked and what has not worked, so that we create a farm bill for the future that will be embraced by American agriculture in 2018."

Perdue's road trip sounds similar to former Ag Secretary Mike Johanns' farm bill listening tour in 2005, even if there was no RV involved that time. Johanns' tour laid the groundwork for the then-Bush administration to later offer its own farm bill proposal to Congress. The proposal was panned heavily by Congress at the time, though some of the ideas were later incorporated in the 2008 farm bill.

A USDA spokesman did not respond to a question from DTN over whether Perdue intends to draft specific farm bill recommendations to Congress.

Perdue's events include opening the Wisconsin State Fair with Gov. Scott Walker on Thursday in West Allis, Wis., as well as a farm bill listening tour at the state fair park. Later that day, Perdue will tour a hunger-task-force farm and then also hold a media-availability event with House Speaker Paul Ryan, R-Wis., in Janesville, Wis.

On Friday, Perdue will hold similar events in Wisconsin and then hold a farm bill forum at 3:30 p.m. CDT at the farm of Minnesota Farm Bureau President Kevin Paap near Garden City, Minn. Perdue will also catch a Minnesota Twins game that evening.

Perdue's RV tour moves on to Iowa on Saturday where he will tour Sukup Manufacturing in the morning and then give a keynote address to the Iowa Ag Summit at 11 a.m. CDT at the Iowa Events Center in Des Moines. He will also attend a farmer roundtable at the event with Gov. Kim Reynolds and then tour the Living History Farm in Urbandale, Iowa. On Sunday, Perdue will visit the Mississippi Valley Fair in Davenport, Iowa.

On Monday, Perdue will roll into Illinois for another farm bill forum at 11 a.m. CDT with Illinois Agriculture Director Raymond Poe and members of the Illinois Farm Bureau in Rochester, Ill. Later, Perdue will hold a 3 p.m. CDT roundtable discussion on fertilizer issues with agribusiness people at Evergreen FS in Chenoa, Ill. That evening, Perdue will attend a livestock show at the Georgetown, Ill., fair.

On Tuesday, Perdue will promote USDA's role in the NFL's Fuel up to Play 60 event at 9 a.m. EDT at the Indianapolis Colts training camp. The Agriculture Secretary will then tour the Indiana State Fair and hold a farm bill listening session at 12 p.m. EDT on the fairgrounds.

Meanwhile House Agriculture Committee's "Conversations in the Field" listening sessions are scheduled as: 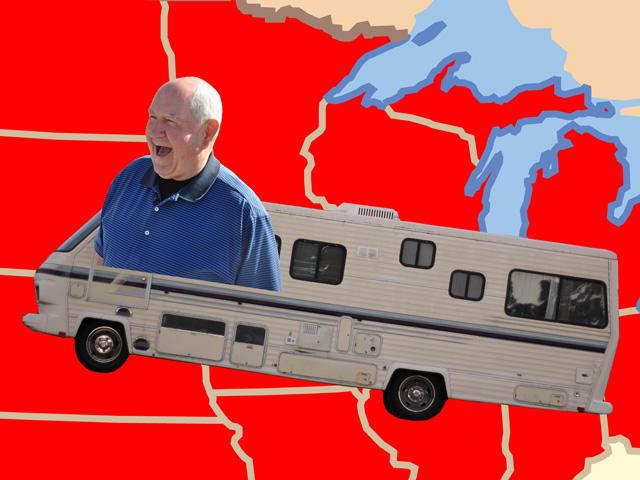