When he's not farming, he repairs roads. She has a part-time job in town. The adult son who lives with them is a wallpaper hanger. They help their daughter care for the grandchildren, they know everyone for miles around, they volunteer to help when the community needs help.

I could be describing a lot of farmers you know, right?

This, however, is not a farm family you have met. They grow rice on a small paddy in their backyard -- in Japan. My encounter with them reminded me that farmers everywhere share many things in common.

It was a pleasant encounter, without question. I met them by coincidence. I had signed up to do a three-night home stay in Japan and asked for a non-English speaking family. I got one. In the 25 years since I last lived in the country, this was the most intensively I'd used my Japanese. They were patient with me when my vocabulary wasn't quite up to the task.

I won't reveal their names; they volunteered to host a foreigner, not become the focus of an article. I will say they live in Nara prefecture, which is toward the western end of the main Japanese island Honshu. I will also say that within a few minutes of meeting these folks, I felt I knew them. Though Japanese, they reminded me of nothing so much as the farm families I've met in my 14 short years of ag journalism in the U.S.: Honest, hard-working people.

Like so many farm families in so many places, farming is not their principal source of income. They're not exactly hobby farmers, however. Subsistence farmers is more like it. The 600-plus pounds of rice they harvest each October suffices to feed them for a year. Rice being their staple food, eaten at nearly every meal, rice self-sufficiency makes a meaningful contribution to their standard of living.

They're proud of their very local rice and they have reason to be. It owes its flavor, they say, to the pure water flowing down to them from the nearby mountains. They talk about this water the way French winemakers talk about the soil in which they grow their grapes.

For everything other than rice and the few vegetables they grow in season, they need cash. He's 75, she's 69 and they're both still working. The 41-year-old son left the house every day at 6:30 a.m. and returned late at night, even on Sunday. Any day there's wallpaper to hang, he works.

"Don't worry about him," his mother responded. "He's young. He can do it."

They're careful with money, but when they need something they buy it. Their house is spacious by Japanese standards. Her husband was born in the original house, which today sprawls with additions, including a new western-style dining room they built a few months ago. To get to the bathroom you have to walk outside and cross a small courtyard on a walkway, then re-enter another wing of the house.

There are three vehicles in the carport -- a van, a small pickup and a sedan. Next to their daughter's house a few hundred feet down the hill, built on what had been a family rice field, they keep a couple of pieces of construction equipment he uses in his work.

Technically, they live within the borders of a village that claims 5,000 inhabitants. The population feels smaller, though, perhaps because the village occupies a vast area, with clusters of houses scattered here and there. Their house, with the rice paddy in the back yard, is on a paved road at the edge of one of these clusters. There's plenty of space between the houses; many of the neighbors have rice paddies, as well.

From the highest hills nearby you can see Osaka, 30 miles to the west. From their house stretch miles of soft green hills dotted with flooded rice fields, many of them terraced. Neighbors a few hundred feet up the road have a strawberry greenhouse; down the road are greenhouses growing eggplant, okra, tomatoes, cucumbers and other vegetables.

Though the rice paddies are small, the rice production is mechanized. Rice-planting machines are available to rent; the family once planted by hand, but no longer. There's also a small public milling machine they can use to remove the husk from the brown rice. Pour in 60 pounds of rice, insert 300 yen (about $2.80) and white rice comes out one spout, bran the other.

Observing how they live and listening to them talk took me back to a question I have mulled many times over the years: What's more important -- the cultural differences between Japanese and Americans, or their common humanity?

In my eight years living in Japan, my answer to that question sometimes varied from one day to the next. Ultimately, though, I have come to realize it's a false choice. The answer is they're equally important. A farm family in Nara and a farm family in Nebraska speak very different languages and have very different customs, but they also have many, many things in common.

One is a shared love of living in the country. At the end of my trip, she told me that as a young woman she had thought the country boring. She had dreamed of living in Osaka. In the end, though, she was so glad she had stayed. Her answer was so impassioned that in retrospect, I realize I should have asked her if there's a Japanese song to rival John Denver's, "Thank God I'm a Country Boy."

Unlike her, I have always been an urbanite -- as well as an Urban. But having the opportunity to see how she and her family live, I can easily understand why she feels the way she does. I'm not a country boy, but in Japan as well as America, I can understand why people thank God they are. 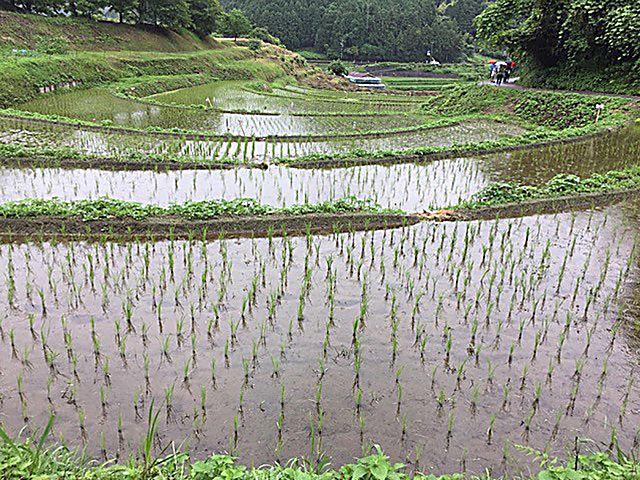