BASEL, Switzerland (DTN) -- Syngenta and its new owner, ChemChina, wasted little time basking in the satisfaction of a long-fought acquisition.

Officials from both companies discussed the future of the seeds, biotech and crop chemical business at a June 27 press conference at Syngenta headquarters here. The event followed on the heels of the June 26 stockholders meeting, which finalized Syngenta's purchase by the company otherwise known as the China National Chemical Corporation.

While the international press gathered were treated to the obligatory comments of appreciation for all who made the 16-month process happen, talk quickly turned from the past to where the company was going, and hinted at further acquisitions and mergers it might take to get there.

Much of the commentary was an implied promise of openness and transparency in the face of some concern the new ownership would create the opposite.

"We will be the most collaborative and trusted team in agriculture," Syngenta CEO Erik Fyrwald told reporters. That could take the form of partnerships, but it might also include further acquisitions.

"Any opportunities that may appear in the future that would fit well with the business strategy of Syngenta, ChemChina would fully support," said Ren Jianxin, ChemChina chairman.

While they demurred at naming specific acquisition targets, both Fyrwald and Ren were asked multiple times about their interest in the sale of Liberty Link seeds and herbicides by Bayer.

It's expected Bayer will jettison its Liberty Link assets as one of several "approval remedies" needed to gain regulatory clearance to merge with Monsanto.

"We think [Liberty Link] is an interesting asset, that whole set of products are," Fyrwald told DTN later during an exclusive interview. "Where companies are interested in selling, we're interested in talking."

The new business strategy will be heavy on reviving Syngenta's seeds arm. Talking to reporters, Fyrwald noted his company's 7% seed market share, behind recent industry estimates for Monsanto at 27% and DuPont at 17%.

"We're now in a distant third place, and we want that to become a very strong third place," he said.

"We lost our edge in seeds, that's why we brought some new leadership to complement our own capabilities," Fyrwald told DTN. "We will be investing more in breeding and breeders, more in biotech traits," in addition to what may come through mergers, acquisitions and collaborations.

Several times during the press access day, Ren repeated that his goal for Syngenta is to double in size within the next five to 10 years. He pointed to similar growth at other ChemChina acquisitions, including Italian tire maker Pirelli and Israeli generic crop chemicals manufacturer ADAMA, proof such a goal is attainable.

U.S. farmers will be a key part of that growth, Fyrwald added. While he fully expects to grow sales in China and in other developing areas, "the U.S. is still the No. 1 market in terms of technology adoption."

Fyrwald was upfront to address concerns that, once owned by a Chinese company, Syngenta would turn its research and development efforts to focus on that country.

"I believe China will adopt more technology over time, but it will be over time," Fyrwald said. "When China thinks about food security for its people, they of course want to improve their agriculture in China. But they think more about making sure innovations are getting out to the world. Their concern is in case they have floods or droughts, how can they make sure there is plenty of grain for the Chinese people."

So it's critical that seed and other crop advances are adopted in the U.S. and Brazil, both of which are important grain and oilseed exporters to China, he said.

Many seed industry watchers are curious how owning one of the big biotech companies might change the historically slow pace of biotech approvals by the Chinese government. The failure by the Chinese to approve Syngenta's Duracade and Viptera corn insect traits ahead of harvest led to corn and DDG shipments being rejected in China, and lawsuits against Syngenta by U.S. farmers. A Kansas City court earlier in June awarded $217.7 million to Kansas farmers who said the grain prices they received were lower due to the loss of a key corn buyer.

Those events happened before ChemChina began its quest to acquire Syngenta.

Ren said he believes technologies such as genetically modified seeds are critical to feeding the world and will eventually be accepted by the Chinese. Already, he and Fyrwald said, China has made steps to improve its approval processes for technology traits.

Will Syngenta have an inside track in getting traits approved, Fyrwald was asked. "When the Chinese upgrade their government processes, it's for everybody," he replied. 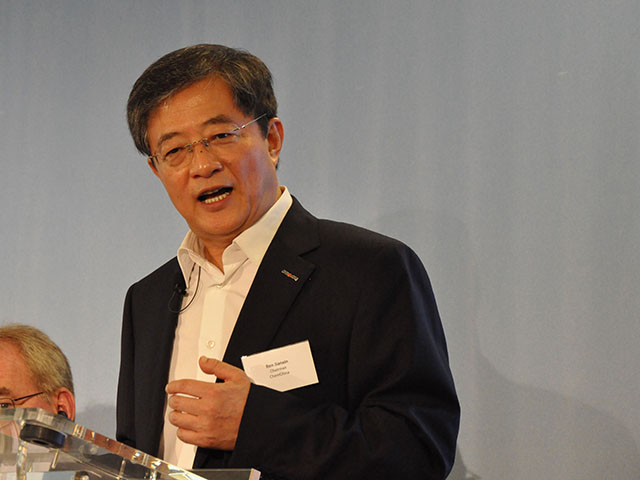