OMAHA (DTN) -- It did not take long for the first boxes of U.S. beef to get shipped to mainland China.

With a little fanfare from Nebraska Gov. Pete Ricketts, the packing plant Greater Omaha Packing sent the first load of boxed beef from Omaha to China on Wednesday after 14 years of being shut out of the market.

"Nebraska is the country's top beef processor as well as beef exporter, and China is the second-largest importer of beef in the world," Ricketts said. "From the beginning, my administration focused trade efforts on China to position Nebraska beef to be able to capture significant sales as soon as the market opened."

After 14 years, the beef market to China was finally formally reopened on Monday as USDA released the final protocols that packers had to meet.

Greater Omaha Packing, which already exports to 69 countries, had spent months helping develop the relationship to send beef to China. Last September, a delegation from China toured the Greater Omaha Packing facilities, which helped pave the way for the company to start planning for the reopening of the market.

"China has the potential to be the largest export market for U.S. beef," said Henry Davis, president of Greater Omaha Packing. "There is a tremendous amount of opportunity there."

Davis noted the Chinese market is a very different dynamic than when the U.S. was shut out in 2003. The middle class has grown and there will likely be a lot of enthusiasm for U.S. beef.

"There is a lot of wealth over there and their consumers are excited," Davis said.

Ricketts and Nebraska Agriculture Director Greg Ibach said the exports have the opportunity to provide a lift for farmers and ranchers in the state.

Davis told DTN his sales team has received hundreds of calls over the past several months from potential customers looking to export to China. He also added sales staff that was bilingual as well.

"Being that we ship all over the world, we are familiar with shipping techniques to different countries and how to facilitate that," Davis said.

Greater Omaha Packing and a Tyson Foods plant in Lexington, Nebraska, are the only plants thus far approved for beef exports to China, according to USDA's eligible supplier list.

Davis declined to say exactly how much was sent on Wednesday, but he said the volume was significant enough to go to several different locations. "We don't know exactly where the beef is going to end up," Davis said.

Greater Omaha Packing processes up to 2,400 head a day and had sales last year of about $1.7 billion.

Chris Clayton can be reached at Chris.Clayton@DTN.com 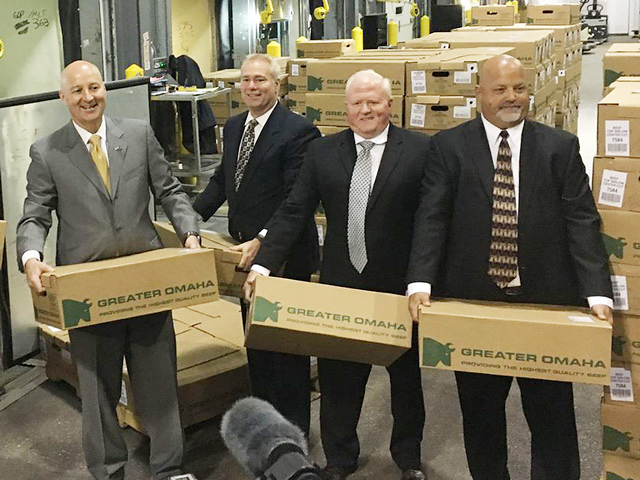