ASHLAND, Kan. (DTN) -- A simple framed print of a powerful message stands out on the wall of Jenny Giles Betschart and her family's temporary home in their guest ranch house.

"We survived because the fire in us burned brighter than the fire around us," says a phrase in white print over an otherwise solid black outline of the state of Kansas.

Beneath it is the date March 6, 2017: That is when a wildfire hit and burned everything in its path. Betschart's family escaped the flames with just the clothes on their backs.

Almost three months after the fires, life on the Giles Ranch north of Ashland, Kansas, focuses on tasks that need to be accomplished.

Ranchers across southwestern Kansas and northwestern Oklahoma are in this mode as the range heals and fences are rebuilt after an estimated 660,000 acres of pasture were burnt by wildfires in early March.

The Giles Ranch is a four-generation ranch founded in 1947 and operated by Roger and Kathy Giles and their three daughters: Jenny, Katie Giles Shaw and Molly Giles Beckford. While Roger and Kathy's house survived the fires thanks to protection from neighbors, each daughter lost her house on the ranch.

That was just the beginning.

The ranch also lost half of their cows, 80% of their calves, saddle horses and a family dog. In addition, their ranch office and all cattle records were lost, as well as other buildings, tools and miles of fences.

Despite everything that was lost, Giles Betschart is thankful no lives were lost on the ranch in the fast-moving wildfires. Others were not as fortunate, she said.

Still, operating a ranch is challenging enough even without these extremely adverse conditions. The days after the fires consisted of putting down burnt animals, tending to live animals, taking hay deliveries and fixing miles of fence, she said.

"After the fires, we were feeding donated hay one day and a hydraulic line on the tractor broke, usually a simple thing to fix, but we didn't have any wrenches to fix it since the shop burned," Giles Betschart told DTN.

Southwest of the Giles Ranch, David Clawson ranches near Englewood, Kansas. The fires raced across his ranch too that March day, killing cattle and destroying fences, a building and supplies at the ranch headquarters. However, the fire spared another building and his home.

"The fires came across this low spot and then just stopped before it got to my house. We were extremely fortunate," said Clawson, who is president of the Kansas Livestock Association.

Like the Gileses, Clawson saw much support from the local community as well as from complete strangers who arrived to offer their help after the fires were out. People removed the burned-out fences, he said.

Just across the border into Oklahoma, fires burned as well.

James and Debbie Robison, who run cows near the Kansas/Oklahoma border north of Buffalo, Oklahoma, lost a few head of cattle, miles of fence and the family home on the farm. Debbie and her sister grew up there and her nephew was now living in the house.

While she is glad her nephew survived the fires, seeing her childhood home burnt down was extremely emotional for her and her family.

"There was a lot of memories of good times in that house," Debbie Robison said. "With the house gone now, that is all we have."

Now, almost three months since the fires, all three ranch families find themselves looking forward, not back.

Fencing is the chore at the top of many ranchers' to-do lists. The Giles Ranch has 100 miles of fence to replace, with some on their own land and some on leased land. The family is working with landlords to fix this fence as well.

Clawson said he has about 28 miles of fence to repair and estimated it could be a year to do all of it. So far, he has rebuilt about two miles of fence.

The perimeter fences get first attention and then fences within ranches will be fixed. Cattle are being held for now with temporary electric fence.

Since the ranchers are putting in permanent fences, they are hiring professional fence-building crews to do most of the work in the region. Rebuilding fence is not cheap. It costs roughly $10,000 a mile to replace an old fence.

Cattle are again grazing on all three operations as the green grass has carpeted the region. Several inches of rain have fallen this spring in places that only see roughly 18 inches a year.

This moisture allowed rangeland to regrow at a quicker pace, according to Laura Goodman, Oklahoma State University Extension range specialist.

"I think some thought we were headed for another dust bowl after the fires," Goodman told attendees at a range meeting south of Ashland on May 18. "This is different, there is no tilled soil, and we have intact perennial plants with crowns of the plants still there."

What ranchers may see growing in their grasslands as the grass begins to grow again is something Goodman called plant succession. Weeds will begin to grow and compete with other plants for water, nutrients and sunlight.

Goodman said that, in most pastures, these weeds will compete at a low degree with the existing grass. While some ranchers may want to apply herbicides to control these undesirable plants, Goodman thought most of these situations will not be at a high enough level to be worth investing in the cost of spraying.

Giles Betschart said she has seen the emergence of weeds on their rangeland as they began to graze cattle once again. They plan to flash graze their grass to hopefully control weeds and avoid overgrazing.

Clawson said he delayed his grazing season by about 30 to 60 days before turning his cows on the grass. He is also lightly grazing the land so he doesn't overgraze the existing grass.

"I think you are going to see a lot of folks only running half of the normal grazing populations," Clawson said. "Previously, maybe it was 20 to 25 acres per cow per year and now it will be 40 to 50 acres per cow.

Delaying grazing and lowering stock rates are two strategies ranchers who had grasslands hit by fires should employ to assure overgrazing does not occur, according to Walt Fick, Kansas State University Extension range specialist. Overgrazing can lead to increased runoff, decreased infiltration and overall reduced production.

"There is no perfect system as different ecological sites have different stocking rates," Fick said. "I like the 'left half, take half' philosophy."

James Robison said he believes this may be the best grass he has ever grazed his cattle on. The fires burnt away undesirable plants and trees and left just the grass, he said.

"All the rains really have helped the grass to grow good since March," he said.

Ironically, before the wildfires hit, ranchers in the Ashland area were working on a controlled burn plan to improve the quality of the grasses and limit the risk of wildfire.

As for rebuilding structures on the Giles Ranch, this should begin this summer.

Giles Betschart and her family planned to begin construction on a new house around June 1. Building a barn that would house their ranch office should happen as well, she said.

Giles Betschart has been attempting to retrieve what computer cattle records she can get from the cloud. The family has a temporary trailer office set up near Giles Betschart's home.

As for how exactly they are going to rebuild their herd, she said currently there are no complete answers.

"Someone mentioned to me the other day that we survived one of the worst droughts in recent years and now the worst fire in the Kansas' history," Giles Betschart said. "We are a family of faith; God will get us through this." 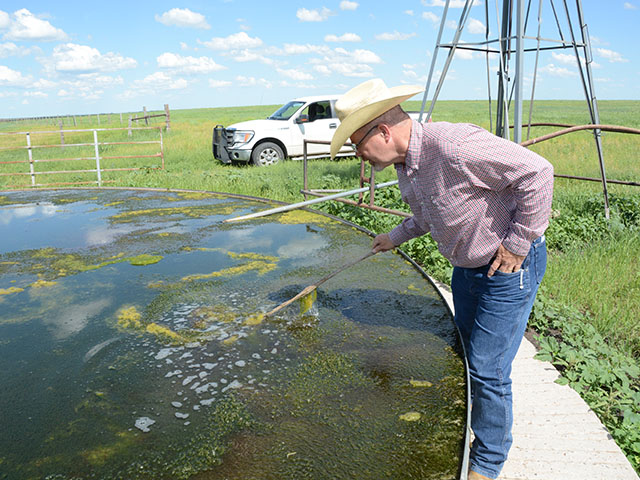