OMAHA (DTN) -- April is known for erratic weather, but the month may have outdone itself this year.

Over the weekend, a wintry storm system dumped up to two feet of snow on parts of the Great Plains, flattening a winter wheat crop that was maturing weeks ahead of normal. Meanwhile in the Midwest and Midsouth, relentless rains swelled rivers and flooded freshly planted corn and soybean fields.

"Precipitation totals ranged from three to eight inches of rain in the Midwest, with heaviest totals south of Interstate 70 in Missouri and Illinois," said DTN Senior Ag Meteorologist Bryce Anderson. "Some reports had over 10 inches of rain. Meanwhile, western Plains wheat incurred possibly extensive damage from snowfall ranging from a few inches to more than a foot. Twenty-plus inches of snow were reported in Oakley, Kansas (northwestern Kansas)."

"This weekend's weather adds to the likelihood that world wheat production will be modestly smaller in 2017 and should help wheat prices stabilize as bearish pressures ease somewhat," Hultman said. "With DTN's National Hard Red Winter Wheat Index still trading near its lowest prices in 11 years, the market is overdue for a more stable, possibly even bullish performance in 2017."

The weather has also "tossed a basketball into the USDA's marble game of planting estimates" as Midwest farmers weigh corn and soybean replant decisions in the coming weeks, he added.

Horton left behind a wheat crop completely flattened by 18 to 20 inches of wet snow. Before the deluge, which started on Friday night and continued into Sunday afternoon, most of the Horton family's wheat crop was in boot stage or just beginning to head out.

Now it may be dead or frozen beyond recovery.

In the panhandle of Oklahoma, wheat farmer Jason Becker is playing the same waiting game, as his fully headed wheat lies flat under a frigid 4-inch blanket of snow.

"I'm guessing the snow broke some stems off," he told DTN. "As many lives as wheat has, I'd say we have to be on life eight or nine by now."

Kansas Wheat CEO Justin Gilpin estimates up to 3 million acres of winter wheat in Kansas were affected by the late-season blizzard.

"We'll be keeping an eye on wheat tour this week," he said. "But I don't know how you count stems under a foot of snow." (DTN Crop Production Editor Pam Smith will be on the wheat tour. Follow her @PamSmithDTN and see the initial story here: http://bit.ly/…).

Adam Casner's farm was about 90% planted when the rains started falling last week. Up to 5 inches have fallen on his corn and soybean operation near Carrollton, Missouri, in the central part of the state.

By Monday morning, much of the water had receded, but some low-lying acres were still swimming.

"It is nothing like the amount of rain they've had in southeast and southwest Missouri," Casner told DTN. "It makes our problem seem small."

So far the Missouri River has stayed in its banks near Casner's farm, he said. Many small creeks, however, have gone over their banks.

This was no warm, spring rainfall, Casner added.

"This is like a winter rain," he said. "We've had lows in the 30s, and the sun came out for three hours yesterday. It was the first time since Wednesday."

Casner fears for his planted crops: "A lot of seed in the ground is trying to germinate. Corn that is up is yellow," he said. "A lot of water has been standing around 48 hours already. There will be a lot of replant, but not sure how much right now. Probably the stuff that went into the ground right before the rain will need replanted."

Chapin, Illinois, farmer John Werries said his farm has seen about 5.4 inches of rain since last Tuesday with the heaviest rains coming on Saturday in western Illinois. By late Saturday there was "standing water everywhere" along the Mississippi River bottom, he said.

Werries said the combination of strip-till and no-till methods, along with cover crops and tiling on his 3,800-acre farm helped to minimize the amount of standing water on his corn and soybean fields.

Corn planting finished last Tuesday, he said, and he had drilled about half of his bean acres with some 600 acres left to plant.

"I don't know how it's going to turn out," Werries said. "We'll be checking for all kinds of disease pressures."

The weekend weather took some traders off guard.

"DTN customers should not have been surprised by this weekend's turbulent weather, but apparently noncommercial traders were stunned as Friday's CFTC data caught specs holding a record high 130,036 contracts net short in Chicago wheat as of April 25 and a small net-short position in K.C. wheat," Hultman noted.

"While there is also some commercial buying going on, as indicated by the weaker carry in new-crop Kansas City futures spreads (July-to-Sept, Sept-to-Dec), it's hard to say what the actual impact on supply and demand could be," he said.

Wheat growers had already planted the smallest winter wheat acreage since 1919 and were on pace to produce the smallest crop since the 1.546 billion-bushel crop in 1972, Newsom added.

The recent weather may produce some fresh interest in wheat numbers in next week's USDA World Agricultural Supply and Demand Estimates reports, but Newsom is looking farther ahead.

"I'm interested in how things act beyond this week," he said. "[Will] we see serious realignment of spreads, with strong uptrends and weaker carry, or [will] this produce noncommercial short-covering buying only. If the latter, it would suggest the commercial side of the market is still looking at large global supplies versus a reduction in U.S. production."

"With final corn planting dates for federal crop insurance at late May in Missouri and June 5 for most of Illinois, it seems likely that some corn acres will be lost in 2017," he said. "Final soybean planting dates for most of those two states extend to June 20 so there is a chance of soybean acres yet being planted, but keep in mind that there is more rain in the forecast so the next planting opportunity is still weeks away, at best."

Cold, wet April conditions had already pushed soybean prices lower on the idea that some corn acres may switch to soybeans, Hultman pointed out.

"This weekend's rain plus a new wet seven-day forecast for the southern and eastern Midwest is making traders wonder for the first time this year if some soybean acres will also be lost in 2017," he said.

Comments may be sent to talk@dtn.com 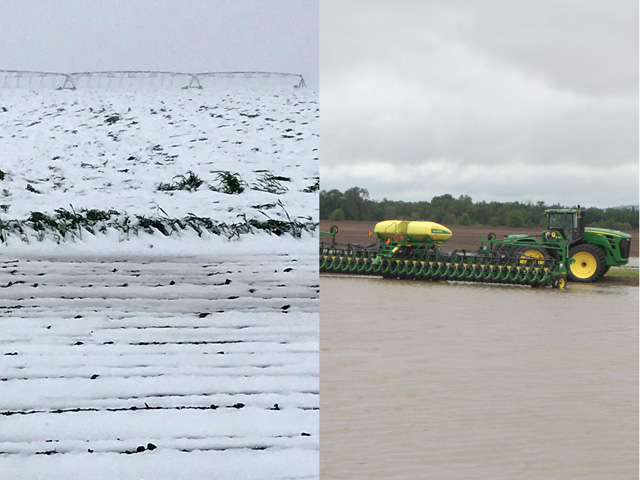