DECATUR, Ill. (DTN) -- There's a definite chill in the air when it comes to this year's hard red winter wheat crop. Frost and freezing temperature across parts of Kansas this week have left questions as to how much damage might have occurred in a crop that is more mature than normal, and therefore, more vulnerable.

Starting Tuesday, nearly 80 grain traders, government officials, reporters, millers and farmers will span across Kansas measuring the health and potential yield of the state's wheat crop as part of the Wheat Quality Council's Hard Red Winter Wheat Tour. Traveling from Manhattan to Colby to Wichita and back to Manhattan, the three-day tour stops to pull samples every 15 miles or so to estimate yields. DTN Crops and Technology Editor Pamela Smith will be one of the participants.

Scouts will also be on the outlook for diseases, emergence issues and other production problems. According to the National Agricultural Statistics Service (NASS) for the week ended April 23, the crop is 82% jointed, behind 91% last year -- but ahead of the five-year average of 70%. NASS reported Kansas' wheat crop as 25% headed, ahead of 20% last year. Freeze damage generally doesn't show until a week or ten days after an event, so scouts may struggle to assess that as a factor. Generally, it takes a minimum of two hours of freezing temps to do damage with injury during heading and flowering to be most pronounced.

Wheat stem rust will be on the radar, as it has already been observed in Texas. Rick Horton, a wheat producer from Leoti, Kansas, also expects to see wheat streak mosaic virus, especially in the western portion of the state. The warm conditions in fall, winter and early spring have favored viral diseases. However, Horton said volunteer wheat is a bigger contributor to the problem and neighboring fields left uncontrolled before the growing season are always a worry. "There will be whole fields that get sprayed out [terminated] in some of these areas," Horton predicted. Stripe rust is also being reported in many areas of the state.

Even with acreage levels at a century low, it will take plenty of production problems and perhaps a severe weather event to bring wheat prices to favorable levels, according to DTN Analyst Todd Hultman.

"After four consecutive years of rising wheat surplus, the concern among producers this year is will 2017-18 become number five," Hultman said. "Here in the U.S., wheat production accounted for 8.4% of the world's total in 2016-17 and U.S. exports accounted for 15% of world exports. Kansas wheat production accounted for one-fifth of the U.S. total in 2016-17. But this year, USDA estimates wheat plantings will be down 12% in Kansas and down 8% for the entire U.S., so an even smaller world share is likely.

"With the 2016-17 U.S. ending wheat stocks-to-use ratio near 52% and at its highest level in 30 years, U.S. HRW wheat prices remain near their lowest level in 11 years and it will take more than this year's planting reduction to significantly lift prices -- help from adverse weather is needed," he added.

So far in 2017, the world's major wheat regions are not reporting significant problems, but there is concern about dry weather in western Europe and a cold start to spring in Canada and the northern U.S.

"In the southwestern Plains, the year started with drought concerns, but rains since March have brought significant improvement," Hultman said. "I expect the 2017 tour will show Kansas wheat in good condition, but not as good as last year's 57.0 bushel average for the state." Representatives from Texas, Oklahoma and Nebraska will join the tour to comment on conditions in those states.

This will be Phillip Beeson's sixth HRW tour. Beeson is the key resource for commodity tracking and position reporting at the Kentucky-based Beeson & Associates. "We are most interested in knowing how the western areas of Kansas have been impacted by the recent rains," Beeson told DTN on April 26. "With wheat markets hitting new lows over the past few weeks -- our main question will be: 'Is the near term bottom in the market?'

"If conditions on the ground are not as great as many are expecting, we would expect to see some firming of the KC markets," he said. "In years past, where wheat markets have either made new highs or new lows within a few weeks of the wheat tour, the trend is broken once the scouts enter the field. With that said, it would be surprising, in our perspective, that this tour would bring additional bearish news to the market."

Dave Green, executive vice president of the Wheat Quality Council, reminded DTN that the 2016 tour recorded extremely high yield estimates and the crop went on to prove out the optimism. On Monday, before the freezing weather events, Green said the 2017 Kansas crop is spotty.

"I think everyone thinks there's potential for an above average crop, but probably not what we saw last year," Green said. "There are areas in the southwest corner of the state that had some emergence problems and thinner stands than in the central part of the state."

The tour uses two mathematical formulas to estimate yield, depending on whether the wheat is headed. "We'll see a lot of heading south of I-70. So the first day out of Manhattan, I suspect at least half the routes will see wheat far enough along that they will see some heads or at least wheat in the boot stage where we are able to use that more accurate formula," Green said. "But as we get closer to Colby, it will be further away from heading, which will give everyone a chance to use the other yield formula [counting tillers]."

Beeson said that with wheat prices being so low, some might assume the crop tour holds less importance than in more bullish years. "However, as buyers of wheat, we would not expect these low prices to last all year and are looking for the best time to place our buys," he said.

More cold weather and potentially too much rain headed to wheat country over the next few days might dampen the enthusiasm of some scouts to crawl out of the truck to pull samples next week. However, the question is whether the markets will warm up slightly based on these weather events and what it all means to final yield.

DTN will be tweeting, posting midday updates and nightly summaries of the winter wheat tour. Readers can also follow on Twitter #wheattour17. 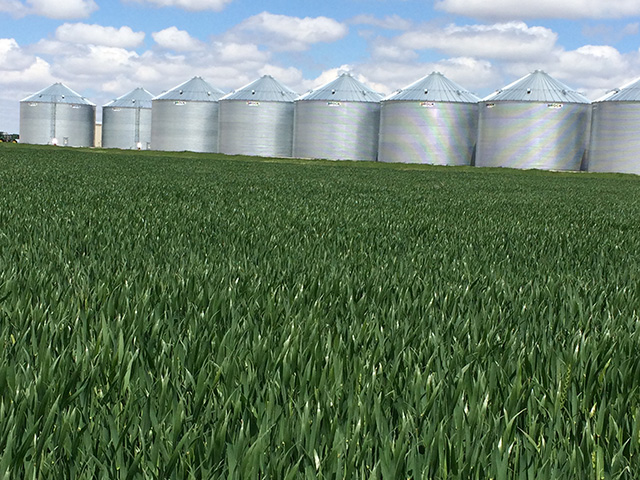