TRENTON, Ky. (DTN) -- Hart AgStrong created a lot of fanfare when the small Georgia oilseed processor expanded into southwest Kentucky in 2014 and offered farmers a way to diversify their crop production by raising canola.

Hart AgStrong got a $450,000 tax incentive for job creation from the Kentucky Business Investment Program. Steve Beshear, Kentucky's governor at the time, came to the groundbreaking for the $7.3 million, 23,000-square-foot facility and said the canola crushing operation "will also provide a significant boost to our local farmers and Kentucky's food production industry. I look forward to seeing this Kentucky-made product on store shelves throughout the U.S."

More than three years later, Hart AgStrong's license to buy grain directly from farmers has been suspended in Kentucky because the small crushing company still owes farmers roughly $2.5 million on what they were supposed to receive on last year's crop that was delivered to the Trenton crush facility.

Until financial troubles hit last year, Hart AgStrong looked like a small shining star of a family operation that grew from nothing a bit more than a decade ago. Four cousins started the company with a small pilot crush facility in northeast Georgia, working with farmers to grow canola and sunflowers -- not exactly typical crops in the Southeast. By 2009, they had built a crushing and processing plant in Hart County, Georgia.

The company grew quickly and sought to build out both processing and acreage. In striving to become a refinery operation, Hart AgStrong needed additional crush capacity.

Then they looked to broaden out into neighboring states and chose to build in Trenton. Robert Davis, the CEO and co-founder of Hart AgStrong, said the operation started well until the company lost a large share of its 2015 crop. Unable to build its own storage, the company relied on another business to store the oilseed in local grain elevators. The moisture at harvest in 2015 was high and the oilseed ended up with "catastrophic damage," Davis said. The oilseed was damaged in two bins, including a complete loss in one of the bins.

Canola is a challenging crop to store. It has to be thoroughly cleaned of foreign material. Canola also can clump quickly and generate biological activity such as molding if the moisture is not low. The crop was under a stock insurance policy and Hart AgStrong filed a claim. Unfortunately, the claim was denied as the loss was not caused by an insurable cause, Davis said. Because of a forward contract, Hart AgStrong hedged the crop and part of the agreement required the company to buy the crop back if it failed because of quality. It bought back the damaged oilseed and took a 100% loss on the crop.

"That really set us up for failing on the acreage contracts for 2016," Davis said. "We had to bear the financial ramifications of that and it set us back for the next harvest. We have been struggling to get into a position to meet our obligations to farmers."

As the storage problems came to light, so did a great harvest last spring. To help farmers develop the crop in Kentucky, AgStrong was offering acre contracts rather than bushel contracts. Historically, production had been roughly 50 bushels an acre. Excellent growing conditions in 2015-16 bumped production over 59 bushels an acre.

"In hindsight, we should have said we can't take the canola or have to take much less of it." Davis said. "It was just a progressing problem that unfortunately we did not address soon enough."

Hart AgStrong operated as if the company would find a solution through the crop marketing year. Davis said the company has paid out roughly $7.5 million to farmers, but deliveries were $10 million in value.

Hart AgStrong's CFO wrote letters to farmers last summer noting the company's payment challenges for oilseed that had been delivered. The letter stated that "AgStrong is either beyond our payment terms or is about to be past the payment terms per the agreement you have with us." The letter went on to apologize and state the company is working diligently to correct the situation. The goal, the letter stated, was for all the Kentucky farmers to be paid in full by Jan. 20.

Late last summer, Hart AgStrong staff and the Kentucky Department of Agriculture held a meeting with nearly 60 growers to talk about the situation. Davis and others explained the challenges and told farmers they were looking for investors to help inject more capital into the company.

Katie Hancock, one of the Kentucky farmers waiting for payment, said the situation highlights some of the problems farmers such as herself have to deal with in the current business climate. Producers saw a chance to diversify, but it has led to problems they didn't foresee.

"This is a side of risk management that's less talked about," Hancock said. "We worry about price and production, but getting paid isn't usually a concern. The company was easy to work with, but at the end of the day, we need to be paid. Cash flow is already tight."

Davis told DTN that Hart AgStrong is "in the midst of trying to make another significant payment" to farmers. "Hopefully, we will be able to make that soon."

The company is trying to find a comprehensive solution to pay the farmers the full amount owed in a reasonable timeframe, Davis said. He added that includes trying to get some investment capital injected into the company. "We've been diligently seeking to find a partner or investor, and we do have a good option there that hopefully is going to materialize shortly in a joint venture," he said.

As Hart AgStrong deals with its cash-flow problems paying farmers, the company has been able to get organic certification from USDA for both of its crushing facilities. That allows the company to contract out and crush for other companies marketing either organic or non-GMO oils.

Richard West, grain program coordinator at the Kentucky Department of Agriculture, said he is in contact with farmers nearly every day about Hart AgStrong, but the company hasn't been able to make payments since November. The company can't buy oilseed from producers, but Hart AgStrong is crushing organic canola being shipped from overseas. All of the canola is being receipted to a commodity group.

"We agreed to reduce that bond for 90 days based on their warehouse inventory and the fact that they lost two grain bins," Spruill said.

Still, state department of agriculture officials have confiscated Hart AgStrong's receipts, with the company's permission, so Hart is not allowed to "receipt" grain as a warehouse in Georgia until Georgia's review is completed because grain receipts are often used by farmers to secure operating loans when grain is in storage. If Hart receives an oilseed delivery from a farmer, it must be paid in cash.

The situation has been a blow for the cousins who saw themselves as giving farmers an opportunity to grow an alternative oilseed that has a strong market, but is not traditionally grown in the Southeast.

"It's obviously very difficult because it's not what we intended at all to do," Davis said. "We found ourselves in this position and it's been difficult to undertake." 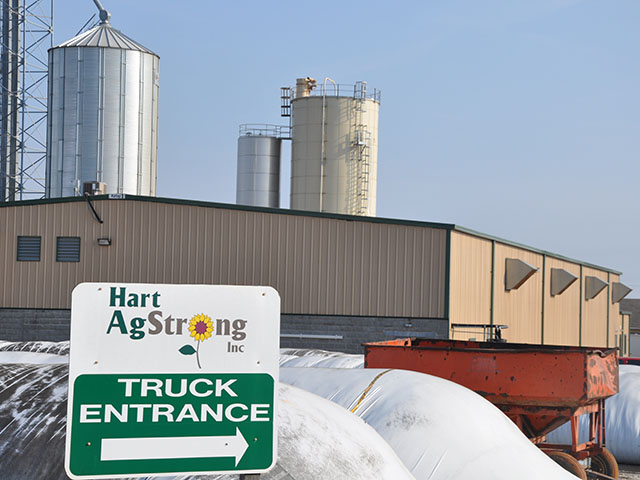